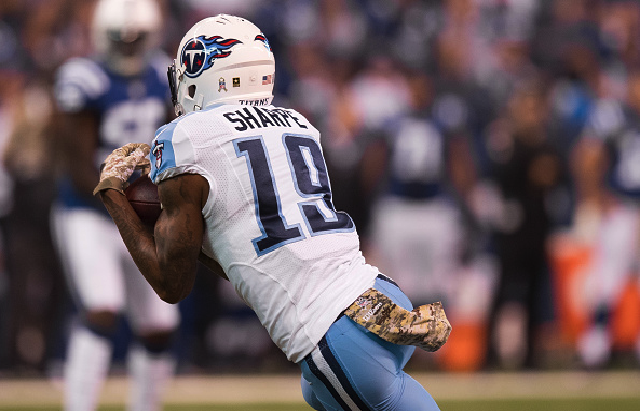 The fantasy football regular season is approaching its dramatic end, leaving many owners scrambling for all-important playoff spots and first-round byes when the postseason begins. Wins and losses could be the difference between a few more weeks of fantasy football fun or a frustrating winter with the bitter taste of defeat.

At this point in the season, the waiver wire should only be used in emergency situations. Hopefully, the roster you’ve spent all season constructing is quality enough to not need a last-minute savior to rescue the season. Those who had their Thanksgiving ruined by Stefon Diggs’ absence for the Minnesota Vikings or Andrew Luck’s concussion for the late Thanksgiving game against the Pittsburgh Steelers will need to pay attention to these five sleepers who could bring big points on Sunday afternoon.

.@TedGinnJr_19 breaks down his incredible TD grab to end the 1st half.

The Oakland Raiders are 8-2, but behind their strong record has been a weakness that has nearly cost them wins on several occasions this season. Head coach Jack Del Rio’s secondary has not been good this year and the struggles to stop the pass were evident once again on Monday Night Football against the Houston Texans.

Brock Osweiler had great success against the Raiders cornerbacks, especially on third down. The Texans quarterback finished with 243 yards and one touchdown, numbers that could have been even more impressive if not for a controversial blown out-of-bounds call that negated a DeAndre Hopkins touchdown in the first quarter.

With the Raiders going from Mexico City back home to the Coliseum, Cam Newton and the Carolina Panthers could have a big day against a secondary drained by the altitude at Estadio Azteca just six days ago. That matchup instantly drives up the value of the Panthers wideouts, many of whom can be easily found on the waiver wire this week.

Devin Funchess will be an option, but the most intriguing sleeper will be Ted Ginn Jr., whose speed could give the Raiders nightmares. Ginn has the big-play threat that you want in a sleeper, and it will only take one play to break things open against a secondary prone to allowing those big-gainers all season.

Tajae Sharpe isn't breaking the game, but he's been useful in 4-of-5 starts, TDs in last two. Wish schedule were better (CHI, off, DEN).

Tajae Sharpe was a popular sleeper in September due to his high target rate, but Rishard Matthews and Delanie Walker took over the production in the Titans’ aerial attack. However, Sharpe has remained the WR2 on the depth chart and played in nearly 90 percent of Tennessee’s snaps on offense last week against the Colts.

Most importantly, Sharpe has become a threat for quarterback Marcus Mariota in the end zone with touchdown catches in back-to-back games. With an incredibly favorable matchup against the hapless Bears, Sharpe could be a nice flex option off the wire who will get his share of targets in a game the Titans offense should dominate on Sunday.

That arm strength from @Kaepernick7

Colin Kaepernick’s second stint as the 49ers starting quarterback has garnered few wins for head coach Chip Kelly, but he has been steady in defeat this season. Kaepernick’s recent form has been productive enough that he has managed to return as a fantasy option for owners who need a quarterback this week.

Since the Week 8 bye, Kaepernick has averaged over 20 fantasy points per game and thrown just one interception. That recent consistency makes Kaepernick a solid option this week, especially when you factor in that the 49ers will likely be throwing the ball often if they fall behind on the scoreboard early. The 49ers’ struggles will likely continue against the red-hot Miami Dolphins, but Kaepernick will have his moments and, most importantly, earn some fantasy points for those who pick him up off the wire.

Eagles rookie Carson Wentz has regressed since his strong start to the season, but he has an opportunity to keep his team’s season alive this week against the Green Bay Packers on Monday Night Football. It’s a crucial game for the Eagles, who are in the NFC East cellar despite a .500 record.

Wentz hasn’t registered a 20-point fantasy performance since Week 3, but would have hit the mark last Sunday against the Seahawks, if not for two interceptions. But he notched 218 passing yards and two touchdowns. Against the much weaker Packers secondary, Wentz should have similar success with far less risk of point-killing interceptions. Expect one of Wentz’s best games of the year in what could be a shootout.

Staying with the Eagles, the matchup with the inept Green Bay Packers is enticing enough to put two players on the sleeper list this week. With Carson Wentz set to have a strong game against that Packers secondary, the ground game should also open up for Wendell Smallwood.

Smallwood has been given double-digit carries in each of the last two games and finally has a matchup where those carries could garner some high upside against a defense prone to giving up big chunks of yardage. Injury concerns for both Ryan Mathews and Darren Sproles could also add to that upside for Smallwood, who has the type of momentum you want to see out of a player due for an uptick in production.

Waiting until Monday night to see if Sproles and/or Mathews will be limited will be a risk, but those double-digit carries the last two weeks minimizes the gamble for a running back who could steal the job for the rest of the season with a big performance.