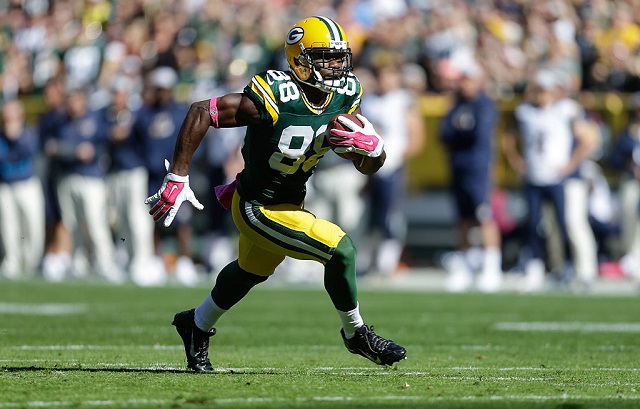 Week 8 is the start of two weeks of bye week hell for fantasy football owners. Consecutive weeks with six teams on their byes will heat up the waiver wire market and increase the need for sleepers. If you haven’t prepared for the bulk of bye weeks by now, you probably need a sleeper or two to fill a hole in your lineup either this week or in Week 9 as the talent pool will be in a drought for the next two Sundays.

With Baltimore, Los Angeles, Miami, NY Giants, Pittsburgh, and San Francisco all on their bye weeks, this week’s sleeper column will be perfect for those who need a Todd Gurley replacement or a fill-in for the star Steelers duo of Antonio Brown and Le’Veon Bell. Let’s take a look at five players who you need to consider this week as potential emergency fill-ins to save your fantasy matchup in a bye crazy Week 8:

60 yards rushing.
10 catches, 66 yards receiving.@TyMontgomery2 did it all for the @packers tonight! #CHIvsGB #TNF https://t.co/dtH3I8L8KF

Friday might be a bit too late to pick up Ty Montgomery in most leagues after the Green Bay Packers placed Eddie Lacy on injured reserve, but the now former backup running back-wideout hybrid is set to do big things in fantasy for the rest of the season. The speedy former Stanford running back could be the new workhorse in Green Bay and with it should come plenty of fantasy points in the second half of the season.

Montgomery will clearly be a monster in PPR leagues, but with standard scoring, he will be a viable RB2 or Flex option. His uptick in touches and the Lacy news will make him a hot commodity who should be off nearly all waiver wires by Sunday. The Packers have no option but to rely on Montgomery, so act fast if you can still find a way to get him on your roster this week.

Last year, undrafted rookie Seth Roberts stole the show in Oakland as he came out of nowhere to become Derek Carr’s favorite red zone target. The slot receiver had five touchdowns in his rookie season, thanks to his connection with Carr. But until recently, Roberts was not getting the targets he saw in 2015.

Despite the slight drop in targets, Roberts already has three touchdowns on the year and is coming off his season-high in both targets and catches from last week. Roberts had four catches and 42 yards against the Jaguars, but failed to find the end zone to complete what would have been an otherwise solid fantasy performance.

With teams focused on Amari Cooper and Michael Crabtree near the goal-line, Roberts always has value as a touchdown vulture. Carr loves to find Roberts in the back of the end zone, and there should be plenty of opportunity for touchdowns against a suspect Tampa defense.

"Look at that strength…Khalil Mack is a handful at the defensive end position!"

Sounds Of The Game: pic.twitter.com/MjjkqFcnH8

This is a rare D/ST sighting on our weekly list of sleepers, but the Oakland Raiders demand attention this week as a strong option for owners looking for a favorable matchup. The turnover-causing Raiders defense has a ton of value against Bucs quarterback Jameis Winston, who has been prone to interceptions in 2016.

Despite their problems in allowing large chunks of yardage, the Raiders defense ranks third in the league in takeaways this season. That’s bad news for a Tampa Bay offense that ranks seventh in the league with 12 turnovers.

After a slow start, the Raiders defense is turning around and coming off its best outing of the season in their Week 7 win over the Jacksonville Jaguars. Add in the chance of a handful of Khalil Mack sacks for added potential points and the Raiders are an easy sell to start in the D/ST spot this week.

The Minnesota Vikings had an abysmal offensive performance last week against the Philadelphia Eagles, failing to score a touchdown until the final seconds of the fourth quarter. Luckily for Minnesota, their Week 8 opponent should give them a chance to get back on track after Sunday’s loss to the Eagles.

The Vikings are likely to use the ground game to get things going again on offense this week against the Chicago Bears on Monday Night Football. Jerick McKinnon and Matt Asiata both should be expected to get plenty of carries on Monday with the Minnesota offense needing to return to what has worked for the majority of the season.

Asiata could be a valuable sleeper this week as a secondary running back who should get some important touches in short-yardage situations near the goal-line. Back-to-back 55-yard rushing yard games, including 18 touches against the Eagles should set up another heavy workload this week. If Asiata can keep his production up while also finding the end zone in short-yardage, the second option in the Vikings backfield could be a diamond in the rough for owners who need a bye week replacement.

Hawkeye C.J. Fiedorowicz with the TD for Texans to tie it up with less than a minute left! #INDvsHOU pic.twitter.com/s75TKOOeh2

Placing your fantasy hopes on Brock Osweiler’s passing seems like a risky bet, but the Detroit Lions passing defense against tight ends has been woeful enough this season for C.J. Fiedorowicz to still be a top waiver wire option this week.

The Lions have allowed nine touchdowns to opposing tight ends in the first half of the season, one of the worst numbers in the league.That number alone should make Fiedorowicz worth a start, but the Texans tight end has been solid all season despite Osweiler’s limitations at quarterback. Fiedorowicz has at least seven targets in his last three games and already has his career-high in touchdowns just halfway through the season. Expect Fiedorowicz to continue his strong 2016 as the Lions defense will again have problems against tight ends in their Week 8 clash with Houston.