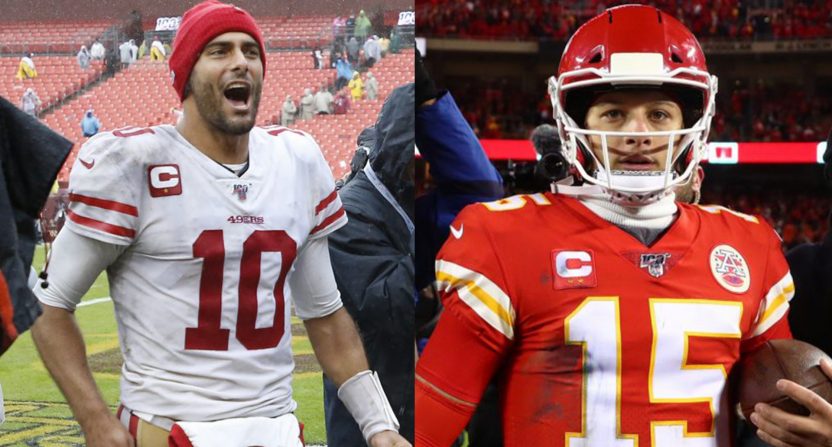 It doesn’t really feel like Super Bowl week, but this Sunday looks like one of the most interesting on-paper title games in recent memory. Everyone with Patriots fatigue is thrilled that Tom Brady and Bill Belichick are nowhere to be found. Considering we know everything there is to know about the Patriots’ play style and pedigree in big games, it is refreshing to have two elite, unproven teams.

The last time the Patriots weren’t playing in February was Super Bowl 50, when the Von Miller-led Broncos defense smothered Cam Newton’s 15-1 Panthers. That was not a particularly exciting game. Despite winning, Peyton Manning was a shell of his former self by that point, and Newton couldn’t do anything against Denver’s defense, which held him to 18-41 passing and three turnovers.

This year’s championship, between the Kansas City Chiefs and San Francisco 49ers, seems comparable to that Panthers-Broncos Super Bowl on the surface. An exciting, MVP-caliber quarterback will go to battle against a dominant defense with a flashy pass rush and a quarterback more or less functioning as a game manager.

But dig slightly deeper, and the matchups are a lot less similar than they appear. The 2015 Panthers went to the Super Bowl primarily due to their defense, despite Newton’s MVP season. They ranked second in defensive DVOA that year and eighth in offensive. In the playoffs, Luke Kuechly pick-sixed Russell Wilson in the first half of the divisional round en route to a 31-0 halftime lead, and Carolina forced seven turnovers against Arizona in the NFC championship.

The Chiefs, in contrast, thrive on their offense. Led by genius play-caller Andy Reid, Kansas City finished third in offensive DVOA, and likely would have been higher had Patrick Mahomes not spent a chunk of the season inhibited by injuries. Their skill position weapons are the best in the league.

It is fair to draw a parallel between San Francisco’s defense and Denver’s, though it should be noted that the Broncos were transcendent in 2015, definitively better than even this Niners team. The primary reason why this year’s Super Bowl is so interesting is the clash between a great offense and a great defense.

Jimmy Garoppolo is a good bit better right now than Manning was in 2015 — Peyton was benched for Brock Osweiler that year, remember. There is potential for both an offensive shootout or a more tame battle, if the Niners defense finds some success against Mahomes. Whatever the result, it should be more exciting than the stagnated defensive battle of Super Bowl 50.

Let’s take a look at five of the most interesting elements of this year’s game, and how they might affect the result:

The first question here: Will it exist? The necessary follow-up: Does it have to? San Francisco subsisted entirely on its ground attack in the NFC Championship Game against Green Bay, steamrolling a hapless Packers rush defense with Raheem Mostert, of all people, leading the charge. Garoppolo attempted eight passes all game which seems concerning but if it works, it works.

The issue here is that it’s 2020, not 1977, and at some point you’ll probably have to throw the ball. The Chiefs are going to score, and it is possible (if not likely) that the Niners will have to play from behind for stretches. If Mostert isn’t seeing consistent gaps in the Chiefs’ run defense, Kyle Shanahan might have to adjust his gameplan a bit.

Shanahan’s highly-touted outside zone running scheme is on tape for the Chiefs to dissect, after Mostert racked up 29 carries against Green Bay. While Kansas City impressively shuttered Derrick Henry in the AFC Championship Game, they had one of the worst rush defenses in the league in the regular season, ranking 29th in rush defense DVOA and giving up the fifth-most rush yards per attempt. The Packers were actually better at defending the run during the regular season. It is certainly possible that the Niners, with a dominant blocking tight end in George Kittle, could continue to find success giving the ball to Mostert or whichever running back gets hot.

Even still, the Chiefs offense will score points, and it’s hard to expect that the Niners’ vaunted defense will completely shut down Mahomes and Co. Garoppolo will have to throw more than eight passes.

There are signs that Jimmy G can handle the load. He won’t necessarily elevate his team the way a superstar like Mahomes can, but he can be trusted to put his team in good positions and make the right throws. In San Francisco’s shootout win in New Orleans in December, Garoppolo completed 26 of 35 passes for 349 passes and four touchdowns, winning a 48-46 thriller. That was at the Superdome against one of the league’s best teams.

Shanahan has put Garoppolo in positions to succeed. His expected completion percentage, a measure of how likely his attempts are to be completed based on receiver location and other factors, ranked third-highest in the NFL, per Next Gen Stats, indicating that the 49ers were creating quality opportunities for their quarterback. He actually outperformed his expected completion percentage, which is a good sign.

He has some good weapons at receiver, and if the Chiefs sell out to stop the run, Garoppolo could have opportunities to take advantage. Garoppolo isn’t an elite QB, though, and we haven’t seen him have to do much heavy lifting in the postseason so far. It will be interesting to see how he performs.

San Francisco’s key on defense is their mobility in the middle of the field, with linebacker Fred Warner as the centerpiece. Part of the reason they have success there and in the secondary is the luxury of generating pressure without sending too many rushers.

They don’t blitz very often, despite a vaunted pass rush: they ranked 28th in the NFL in blitz rate, at just 20 percent, per Pro Football Reference. Even still, the 49ers led the league in hurries per drop-back and ranked second behind the Steelers in overall pressure rate. That is seriously impressive, and it lets defensive coordinator Robert Saleh drop players into coverage while still getting to the quarterback.

San Francisco, based on their track record, probably won’t blitz Mahomes too much. If they’re still able to generate pressure while also tracking down Travis Kelce and the speedy wideouts, that would be a victory for the Niners’ defense.

Patrick Mahomes on the biggest stage

It feels like we sort of forgot how good Mahomes is during the regular season. His injury issues took him out of a couple games and forced him to play at less than a hundred percent, as well as Lamar Jackson captivating us. Mahomes has done his best to remind us of his abilities.

He brought Kansas City all the way back after falling behind against the Texans in the divisional round, throwing five touchdowns and completing 23 of 35 passes despite numerous drops. He put together a similarly efficient performance against the Titans. His success with his legs, both in terms of getting out of the pocket to find windows and scrambling for easy yards, adds another layer of difficulty for defenses.

Given how infrequently he turns the ball over, Mahomes presents barely any exploitable weaknesses. Part of picking a Super Bowl winner is accounting for the Mahomes variable: He might simply be too good, even for this vaunted defense. It will be fascinating to watch Mahomes perform in the Super Bowl, a massive legacy-making event.

Barring a 2013 Seahawks-style performance from the 49ers’ D, this does not profile as the sort of Super Bowl that will feature a defensive MVP. The Chiefs’ offense is likely too good to let that happen.

That doesn’t mean there aren’t crucial players on that side of the ball for both teams. As mentioned above, Warner is important as a ground-covering middle linebacker for San Francisco. Richard Sherman has been a shutdown corner this season. Nick Bosa is already known nationally as an elite pass-rusher, and it’s likely that reputation will only grow on Sunday. Emmanuel Mosely, among other secondary contributors, will be crucial in order for the 49ers to defend the Chiefs’ weapons, particularly Travis Kelce.

On Kansas City’s side, the key is Tyrann Mathieu. As has been discussed elsewhere, Mathieu is huge for the Chiefs’ defense, playing everywhere from the box to deep centerfield and breaking up all different kinds of plays. He will have to avoid getting sucked in by play-action, and he may take some responsibility covering Kittle.

There is also the Dee Ford revenge game aspect. Ford, now in San Francisco, was an important pass-rusher last year for the Chiefs, most famous for lining up offside on a crucial snap in the AFC Championship. He gets a chance to make people forget about that.

Battle of the genius coaches

Both Reid and Shanahan are impressive, ahead-of-the-curve offensive play-callers. They’ve also both had Super Bowl experience. Reid, as coach of the Eagles in Super Bowl XXXIX, lost to the Patriots, a loss that has been the basis for many criticisms levied against him for poor clock management. Kyle Shanahan was the Falcons’ offensive coordinator when they blew a 28-3 lead to the Patriots in Super Bowl LI three years ago. It is hard to blame Shanahan for that particular collapse.

At long last, this is Reid’s chance to win a championship as a head coach. He has been one of the league’s best for two decades. With his aggressive and dominant offense, Reid has his crowning opportunity.

Shanahan is trying to redeem the “Wunderkinds That Emerged From Washington” generation, after Belichick flustered Sean McVay’s Rams in last year’s Super Bowl.

With these two coaches going head-to-head, it’s fair to suggest that this is one of the most interesting Super Bowl matchups in recent memory. At the core, it is great offense vs. great defense, strength vs. strength. We’ll see it go down on Sunday.