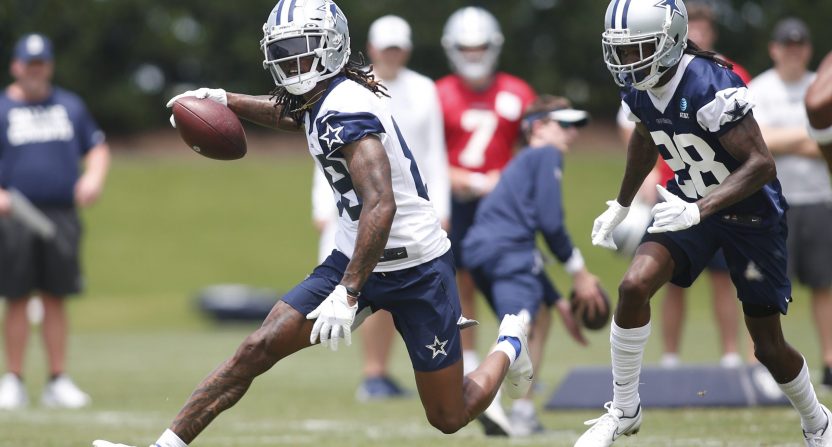 Being a rookie in the NFL can be difficult. Sometimes players improve dramatically in their second (a.k.a. “sophomore”) season. Here are five who could become big stars.

Isaiah Simmons was among the most disappointing rookies. The No. 8 overall pick of the 2020 NFL Draft has been called a Swiss Army Knife on defense due to his versatility and his ability to play multiple positions. Simmons was expected to rush the passer, be a stalwart inside against the run, and drop back in coverage. That’s a lot of hype to live up to. Instead, Simmons seemed lost at times, and he never really seemed comfortable with adjusting to the speed and complexity of the pro game.

Here’s a clear-cut example of a player who was probably hurt by no preseason games in 2020. Simmons did fare better in the second half of the season and got involved more in the defense. Arizona defensive coordinator Vance Joseph said Simmons was one of the best defensive rookies at the tail end of last year. Simmons is expected to be more of an all-around force, but if he simply excels at inside linebacker, that will be a huge plus for the Cardinals defense.

The good news for Joe Burrow: he should be significantly better after a promising rookie year. The bad news for Joe Burrow: the No. 1 overall pick from 2020 might not be the best quarterback in his own draft class. Justin Herbert, last season’s Offensive Rookie of the Year, had the greatest first year by any rookie quarterback. That’s a high bar to live up to. Burrow’s rookie campaign was cut short due to knee injury and the coaching staff has been very careful with him. He appeared in only one preseason game, playing a grand total of 90 seconds.

Can't wait for the comeback. 🙏 pic.twitter.com/fG63MPTIVa

Andy Reid has often compared Clyde Edwards-Helaire to Duce Staley, whom Reid coached in Philadelphia. If that’s true, we can expect a productive second year.

After Week 1 it looked like Edwards-Helaire might be the Offensive Rookie of the Year. He rushed for 138 yards in a victory over the Houston Texans, but only had one more 100-yard game the rest of the way. Kansas City’s revamped offensive line should provide better blocking for a team that ranked 11th in the league in yards per rush (4.5).

Edwards-Helaire is short (5’7″) but strong with a quick burst, as he showed in a 161-yard day against the Buffalo Bills in the regular season. He gets into the secondary fast, putting a lot of pressure on defensive backs to make tackles. Edwards-Helaire will face a lot of soft fronts because teams are so concerned with Patrick Mahomes. Edwards-Helaire could also be more of a factor in the passing game since Kansas City still lacks a reliable third option to complement Tyreek Hill and Travis Kelce.

The NFL passing game is so sophisticated, quarterbacks so accurate and receivers are so precise in their routes, that it usually takes a defensive back a while to get accustomed. So, when a rookie comes in and makes an immediate impact, a lot of people notice. Sneed, a fourth-round pick out of Louisiana Tech, looks like one of the steals of the 2020 draft. Sneed had interceptions in his first two games (one against Deshaun Watson, the other against Justin Herbert), becoming the first rookie cornerback to do so since Marcus Peters in 2015.

Sneed allowed just one touchdown pass and quarterbacks had a 58.1 passer rating against him. Pro Football Focus gave Sneed its highest ranking among rookie cornerbacks. Impressive since he was 16th cornerback selected in the draft. Amazingly, he did not receive a vote for Defensive Rookie of the Year. Sneed’s biggest issue was health. He missed seven games with a collarbone injury. He’ll have a lot more responsibilities now and has a shot at being an All-Pro.

CeeDee Lamb was hurt by Dak Prescott’s season-ending ankle injury. In the first five games, he amassed 433 receiving yards. Over the final 11, he had 502. With a healthy Prescott, Lamb would have been an Offensive Rookie of the Year finalist. There’s every reason to believe that Lamb will emerge as one of the league’s top wide receivers. Dallas has an outstanding trio of wideouts (Amari Cooper, Michael Gallup, and Lamb). That will make it hard for defenses to focus on one target.

Last season, Lamb worked mostly out of the slot. This year, he’s expected to move around a lot more to take advantage of mismatches. Lamb’s speed, athleticism, and ability to gain yards after the catch should lead to more explosive plays. Plus, the Cowboys will be able to stretch the field more. Prescott averaged 8.4 yards per pass as opposed to Andy Dalton’s 6.5. Lamb has already impressed the coaching staff. Don’t be surprised if he surpasses Cooper as the team’s No. 1 receiver.

WR1 season who says no
pic.twitter.com/nzwIjCqgbe