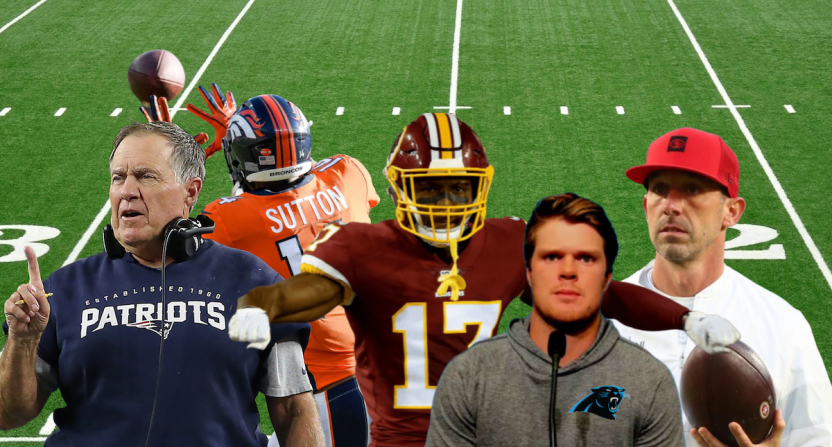 The 2021 NFL Draft is two weeks away and at least five quarterbacks could be taken in the first round. While it’s hard to predict which ones will succeed (nobody expected Justin Herbert’s record-setting year), sometimes going to the right team makes all the difference.

(NOTE: The Jacksonville Jaguars and New York Jets aren’t on this list. They presumably will select Trevor Lawrence and Zach Wilson No. 1 and No. 2 overall respectively. Lawrence and Wilson might wind up as stars, but both are walking into difficult situations on bad teams with new coaches. Also, the Atlanta Falcons didn’t make the cut since Matt Ryan will likely be the starter.)

Since Peyton Manning retired after winning the Super Bowl, the Broncos have started nine different quarterbacks in five years. While former general manager John Elway lured Manning to Denver as a free agent, Elway struggled at drafting quarterbacks (Brock Osweiler, Paxton Lynch, Drew Lock). He stepped down in January and new GM George Paton is in charge. Paton will have the final verdict on Lock, whose completion percentage (57.3) was the worst among starters, and who tied a league-high with 15 interceptions. Even if Lock becomes decent, that’s not good enough. Not in the AFC West where Patrick Mahomes and Justin Herbert also live.

Denver’s offense might not be that far away from clicking. Pro Bowl wide receiver Courtland Sutton missed most of last year with a knee injury. Speedy Jerry Jeudy should be better after a rookie season that saw him drop 12 passes, the second-most by a wideout. Tight end Noah Fant is on the cusp of developing into a star. If all these weapons can get healthy and on the same page, the Broncos might have a fighting chance in the division.

For any rookie, joining a team coming off a playoff appearance is ideal. Especially when you have a chance to start. Washington reached the postseason in the dreadful NFC East with gimpy Alex Smith and unremarkable Taylor Heinicke.

Ryan Fitzpatrick enters this fall as QB No. 1, but Fitzpatrick exists to be replaced. This is his seventh team in the past decade. So, he’s clearly not a long-term solution. Fitzpatrick is a safe option when you don’t immediately have a better option. There’s a good chance that this season plays out like last year for Fitzpatrick: him beginning as the starter, getting demoted to backup, and occasionally coming off the bench.

Washington has a top-flight wide receiver in Terry McLaurin, who has excelled despite mediocre quarterback play. Tight end — and former quarterback — Logan Thomas has been a pleasant surprise. And tailback Antonio Gibson led all rookies in rushing touchdowns. One concern would be offensive coordinator Scott Turner, who hasn’t distinguished himself in his short career as a play-caller. But the defense was very good last year, so maybe Washington won’t have to score that many points.

We used to believe that Bill Belichick was so smart and so ahead of the game that he could win with just about anyone at quarterback: Jimmy Garoppolo, Jacoby Brissett, Matt Cassel, etc. Not anymore. Belichick’s previously unassailable reputation took a major hit as Tom Brady won the Super Bowl with Tampa Bay, and the Patriots missed the playoffs for the first time in over a decade.

Belichick, 69, seems hellbent on getting back to the top quickly, embarking on an unprecedented free-agent spending spree, handing out $159.6 million over nine days (a tacit admission by Belichick that he did a terrible job of drafting in recent years). The Patriots, normally selective buyers, overhauled their roster by adding tight ends Hunter Henry and Jonnu Smith, and wide receivers Nelson Agholor and Kendrick Bourne. All this activity should lead to an improved passing attack.

While New England brought back the fossilized remains of Cam Newton, the Patriots probably will still draft a quarterback. That means an opportunity for a rookie to start and possibly succeed immediately. And don’t forget, New England was hurt by having a league-high eight players opt out of 2020 due to the pandemic.

Yes, the Panthers acquired Sam Darnold in a trade. That doesn’t mean they won’t draft a quarterback, and that doesn’t guarantee Darnold will be the starter for the full season. Darnold has never played 16 games (and now it’s a 17-game season). During his three-year career with the New York Jets, he threw 39 interceptions in 38 games.

Darnold looks like a placeholder. Second-year head coach Matt Rhule and offensive coordinator Joe Brady might be better off with someone fresh rather than a rehab project. Carolina, 5-11, started last season 3-2 until regressing. Do-everything tailback Christian McCaffrey missed most of the season due to injury. In 2019, he led the league in total yards (2,392) and touchdowns (19). Wide receivers D.J. Moore and Robby Anderson both eclipsed 1,000 yards despite some limitations at quarterback.

McCaffrey, Moore, and Anderson provide more help than most rookie quarterbacks are used to. It will be interesting to see if Carolina takes someone such as North Dakota State’s Trey Lance in the first round, or takes a shot at Texas A&M’s Kellen Mond, who might be available in the second round.

No coach puts together a more quarterback-friendly gameplan than Kyle Shanahan. He consistently finds different ways to help his quarterbacks. The Shanahan system turned Matt Ryan into an MVP, Matt Schaub into a Pro Bowler, Robert Griffin III into the Rookie of the Year, and helped undrafted Nick Mullens have one of the best debuts in NFL history.

Shanahan’s zone-blocking ground game produces seemingly regardless of talent. He schemes receivers open for easy completions. His running backs run pass patterns, and his wideouts run the football. As good as Shanahan has been, what he’s never had as a head coach is a chance to develop his own first-round pick at quarterback.

San Francisco wants to end the Garoppolo experience. When the 49ers traded up for the No. 3 overall selection, it was clear that Shanahan has a quarterback he covets. Maybe Alabama’s Mac Jones, Ohio State’s Justin Fields, or Lance. Whoever it is will have a great chance at rookie success, joining a team that went 13-3 in 2019 and reached the Super Bowl. The Niners (6-10) slumped last season because they had the most injured team in the league with tight end George Kittle and defensive end Nick Bosa missing significant time.