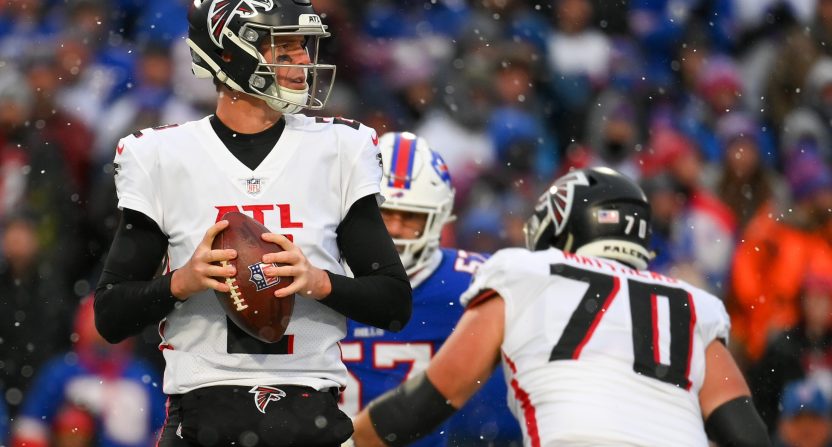 The NFL Draft is over, and it was a lackluster viewing experience. No consensus overall pick. No star quarterbacks. Those things drive TV ratings. Next year promises to be more exciting with Ohio State’s CJ Stroud and Alabama’s Bryce Young likely vying to be the No.1 choice.

Who will be fighting (possibly tanking) to select either? Here are five QB-needy teams that will be jockeying for position.

Note: We excluded the Jacksonville Jaguars and New York Jets from this list since they will likely stick with Trevor Lawrence and Zach Wilson for a third season.

Atlanta Falcons – When your best players are a tight end (Kyle Pitts) and a human Swiss Army knife (Cordarrelle Patterson), you’re in trouble. Not only does Atlanta have a bad roster but the Falcons are on the hook for an NFL-worst $62 million in dead money in 2022 which means they are giving a lot of cash to guys who are no longer on their roster. Matt Ryan ($40 million) is with the Indianapolis Colts and Julio Jones ($15.5 million) isn’t even employed.

According to Warren Sharp of Sharp Football Analysis, it’s the fifth-largest dead cap hit in league history. Of the top 10, only one team finished with more than six victories. Atlanta has a placeholder quarterback in Marcus Mariota and drafted Cincinnati’s Desmond Ridder in the third round. Neither may be long-term solutions. Their best bet is to hope first-round pick wide receiver Drake London develops as quickly as Pitts, and that Calvin Ridley returns in 2023 after being suspended for gambling on NFL games.

Goff should consider himself lucky. In any other draft, Detroit would have quickly picked his replacement. But because there wasn’t a quarterback worthy of a top-10 selection, the Lions instead got Goff some help with first-round wide receiver Jameson Williams from Alabama.

It’s a damning indictment that the moment the L.A. Rams swapped Goff for Matthew Stafford, they immediately won the Super Bowl. Meanwhile, Goff went 3-10-1 as a starter with Detroit. He basically reverted to the player he was before without Sean McVay. Detroit understands that will be no quick fix. And after suffering through the second-highest dead cap hit ($67.1 million) in league history last year, the Lions should have better roster flexibility.

Seems obvious that Detroit will draft a quarterback in 2023.

What grade would you give Jared Goff AFTER Dan Campbell took over the play calling? #OnePride

Houston Texans – The Texans appear to be in the middle of a two-year tank job. In Year 1, they hired and subsequently fired David Culley knowing that last season would be terrible. In Year 2, they promoted defensive coordinator Lovie Smith. They know that this season probably will be more of the same. Smith hasn’t been an NFL coach since 2015 after going 8-24 with the Tampa Bay Buccaneers.

Houston is easy to make fun of. They reportedly originally wanted to hire underqualified Josh McCown. Wisely the Texans did not follow through. Credit Houston, however, for being able to get value in the Deshaun Watson trade. Three first-round picks is a tremendous haul all things considered.

The Texans quarterback situation is lousy. While Davis Mills, a former third-round pick from Stanford, fared decently for a rookie (16 TDS to 10 INTs), the Texans went 2-9 in his starts. The best course of action is to be bad again to have a new face of the franchise.

New York Giants – Joe Judge was the fall guy for the Giants after just two seasons. While the ex-coach certainly made a lot of mistakes, you could argue that former general manager Dave Gettleman did a lot more damage to the once-proud franchise. He made a bunch of questionable moves during his four years. New management will try to clean up the mess.

We already know what GM Joe Schoen thinks of incumbent Daniel Jones. The Giants declined to pick up Jones’ fifth-year option. So, Brian Daboll will try to make do with a turnover-prone passer. Daboll got a lot of credit for Josh Allen’s development. Allen went from an inaccurate passer to the best quarterback in last year’s playoffs (9 TD passes and zero interceptions in two games).

Jones has some of the same physical skills as Allen but there is little reason to believe that he can emerge as even the best QB in his own division. A new coach and new GM will want their own guy in 2023.

Seattle Seahawks – The Seahawks punted on the 2022 season the moment they traded away Russell Wilson. They live in the toughest division in the NFC and they’re going to go to battle with Geno Smith or Drew Lock. Yikes. Smith is a career backup and Lock is best known for his ill-advised rapping.

Seattle didn’t even draft a QB. Its highest picked skill position player was second-rounder Michigan State tailback Kenneth Walker III, the nation’s second-leading rusher. And the Seahawks have a disgruntled wide receiver. For now, DK Metcalf remains on the roster but what if a contract extension can’t be worked out before the start of the season? The star wideout could be on the move too.

Pete Carroll is the greatest coach in franchise history. He’s also the league’s oldest. He’ll turn 71 in September. Is he going to be around for the long haul? Seattle not only needs a talent infusion, starting at quarterback. It also needs a succession plan.