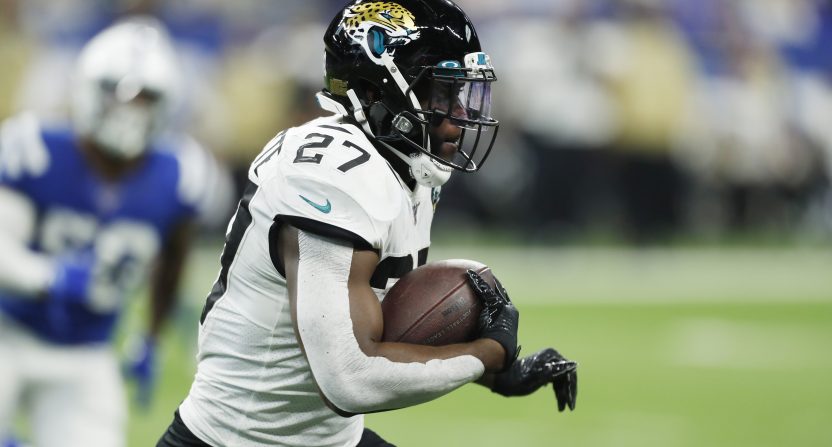 ESPN’s Adam Schefter reported on Saturday that the Jacksonville Jaguars “have had trade discussions with other teams” about running back Leonard Fournette.

Jaguars have had trade discussions with other teams regarding RB Leonard Fournette, league sources tell ESPN. Fournette is due $4.16 million in base salary in 2020. It's a situation that bears watching as this week's draft approaches.

As Schefter notes, Fournette is due $4.16 million in base salary for the 2020 season, the fourth year of his rookie contract. Additionally, the Jaguars haven’t decided if they will exercise Fournette’s fifth-year option (they have until May 4 to do so).

It makes plenty of sense for the Jaguars to trade Fournette, and potentially before next week’s NFL Draft. Here are five reasons why the Jaguars should deal the former No. 4 0verall pick:

The Jaguars are likely to be awful, with or without Fournette

The Jacksonville Jaguars currently are tied with the Washington Redskins for the worst Super Bowl odds, at 150-to-1. Maybe they don’t end up being *that* bad, but it’s hard to see them being anywhere close to contention all the same, and that likely remains the case in 2021.

Running backs on bad football teams are like closers on bad baseball teams. And it’s already a devalued position to begin with.

The best thing the Jaguars can do right now is accept what they are: a bad football team in need of many changes to enter title contention. And the way to get back to being competitive is through the draft. That will take a lot of draft picks over the next few years, and ideally with picks in the earlier rounds. Quantity, but with increased chance for quality.

Additionally, trading Fournette would help the Jaguars’ chances to tank in 2020, which would be ideal (even if the organization doesn’t want to admit that).

While Gardner Minshew did an impressive job in his rookie season, the reality is that he was a sixth-round pick and has limitations at the quarterback position. Odds are, the quarterback of the next title-contending Jaguars team isn’t on the current roster. And the 2021 NFL Draft features a generationally special quarterback prospect in Clemson’s Trevor Lawrence, as well as another highly intriguing prospect in Ohio State quarterback Justin Fields. Jacksonville would be far better off getting a top-three (especially the No. 1) pick in 2021 than winning a handful of games in 2020.

It’s not difficult to find competent running back production, and cheaply

This is why it’s questionable for any team to invest first-round picks or big money in running backs. For one, it’s a quarterback’s league. Additionally, good organizations can find running backs tailored to their system to provide at least decent production in late draft rounds or off-the-street.

This isn’t to say Fournette isn’t good or valuable; he is. But the Jaguars likely can find comparable running back production as they rebuild their roster over the next few years, and for much cheaper than Fournette will cost on his next contract.

There are questions about Fournette’s abilities as a three-down back going forward. Yes, he had 76 receptions in 2019, but while averaging just 6.9 yards per reception and 5.2 yards per target. He can catch the dump-off passes, but can he be a legitimate playmaker as a receiver out of the backfield? Teams like the New England Patriots, New Orleans Saints, and Kansas City Chiefs put as much into the running back’s receiving ability as their ability to carry the football.

And if it’s primarily a two-down back, the player needs to be a highly efficient ball-carrier. Fournette has averaged over four yards per carry just once in three seasons, and it came in a season where he found the end zone only three times in 265 carries (some of that is due to the Jaguars not being in the red zone enough, but still). It’s also inevitable that he loses some explosiveness in the coming seasons.

Additionally, Fournette has had durability issues, with 11 games missed over his first two seasons. The Jaguars drafted him to be a bell cow, but he can’t be that while sitting on the sidelines.

Fournette is likely gone before the 2022 season regardless, so sell now

For the reasons mentioned, it’s hard to see the Jaguars wanting to invest long-term in Fournette. The Jaguars are in need of wholesale changes, and paying big money to running backs in their late 20s isn’t a wise way to kickstart that rebuild (and isn’t a recommended move for any team, really). Somebody should’ve told the New York Jets that.

And even if the Jaguars want to keep Fournette, why should we assume he wants to stay there? It’s a bad/rebuilding team in one of the league’s worst markets, and Fournette’s been campaigning for the team to sign Cam Newton, which would indicate that he isn’t the biggest believer in Minshew.

One way or another, it’s a very good bet that Fournette will leave Jacksonville by the 2022 season, so why not sell high? Fournette’s value will never be higher than it is right now, and there’s the chance he could get hurt or see his production slip (especially with a bad supporting cast) when the season comes along. There are several contending teams that would surely have interest in him, especially with a very affordable contract in the short-term.

The Jaguars should get the best draft-pick return that they can, and that means dealing Fournette sooner than later.