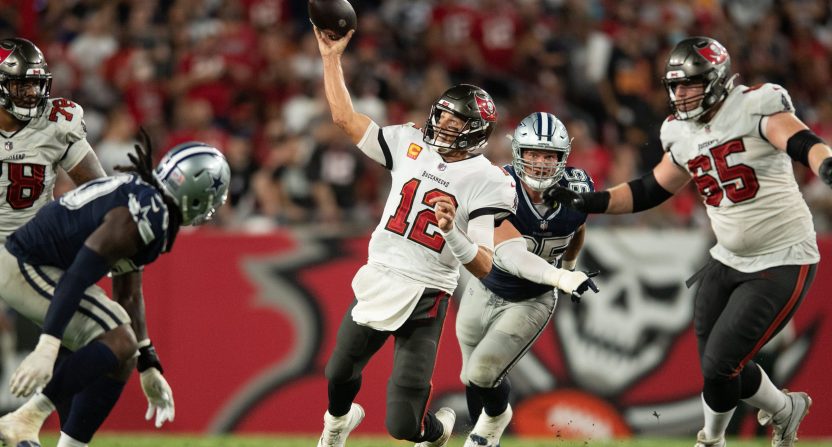 The defending champion Tampa Bay Buccaneers beat the Dallas Cowboys 31-29 on Thursday night in the 2021 NFL season opener. It was an absolutely incredible football game, producing so many crazy plays and sequences, notable trends, and storylines. Here are our main takeaways from the game:

First off, what a finish

This amazing football game deserved a wild finish, and that certainly happened. Leading 28-26 with roughly five minutes remaining, Tampa Bay appeared to be on the verge of going up two scores to likely put the game away, but wide receiver Chris Godwin fumbled at the goal line (the good and bad of this play summarized Godwin’s up-and-down night).

Chris Godwin fumbles at the goal line as the Bucs are trying to put the game away. Whoops! pic.twitter.com/dVWn6jRRuu

On the ensuing drive, Dak Prescott connected with CeeDee Lamb for a first-down conversion on 3rd-and-11 for a 31-yard gain to the Tampa Bay 34-yard line.

Dak Prescott and CeeDee Lamb get the huge 3rd-and-11 conversion for the Cowboys. pic.twitter.com/rXkfLGgQih

That set up a Greg Zuerlein 48-yard field goal attempt, which was a very big question mark after he’d looked awful earlier in the game. But, he nailed the kick this time, giving the Cowboys a 29-28 lead with 1:24 remaining:

So of course Greg Zuerlein nails a 48-yarder to give the Cowboys the lead! This game is absolutely bonkers. 🏈 pic.twitter.com/kbNRHU5v6X

That’s too much time for Tom Brady, though, and he made a couple of big throws on the drive, like this back-shoulder strike to Chris Godwin. However, Godwin may have gotten away with an offensive pass interference on the play. Decide for yourself:

Tom Brady with a rocket to Chris Godwin.

Was this offensive PI? pic.twitter.com/YY67ydCjRX

After Brady threw three passes out of bounds on purpose (a tactic to run the clock down with no timeouts remaining), Ryan Succop drilled what would serve as the game-winning field goal.

Ryan Succop with what would serve as the game-winning field goal for the Bucs. Incredible game. 🏈 pic.twitter.com/eue1YrWN94

Brady showed off his arm strength and smarts all night, tossing dimes to all parts of the field and reading the blitz for meaningful gains.

He completed 32-of-50 passes for 379 yards, four touchdowns, two interceptions, and a 97.0 passer rating. The two interceptions are also misleading: one was a drop by Leonard Fournette on a short pass, and the other was a hail mary pass on a hilarious play to end the half.

Tom Brady to Chris Godwin for a Buccaneers touchdown, and the first score of the 2021 NFL season. 🏈 pic.twitter.com/6lx4euuZau

The 44-year-old rolls out and finds longtime pal Rob Gronkowski for a Bucs TD. pic.twitter.com/sCgLEYeH4q

Tom Brady and Antonio Brown connect for a 47-yard TD!

Good offense from the Bucs.

Brutal defense from the Cowboys. pic.twitter.com/K76hHVcuXe

The Tom Brady and Rob Gronkowski connection is at it yet again, with Brady beating the Dallas blitz for a Bucs TD. 🏈 pic.twitter.com/AuYu9tmaqi

We keep wondering if Brady will show some decline, but it doesn’t appear we’ll be seeing that anytime soon. And having all of these weapons certainly helps.

Dak Prescott was absolutely sensational in his first game back

Just 11 months removed from a gruesome ankle injury that ended his 2020 season (and with a recent shoulder injury also leaving his status in question), Prescott looked like an elite quarterback.

The Cowboys ran the ball for just 60 yards on 18 carries, but Prescott and his assortment of pass-catching weapons (led by Amari Cooper, CeeDee Lamb, and Michael Gallup) were still able to move the ball consistently. Dallas even had six more first downs (30) than the Bucs and more total yards (451).

Dak Prescott throws a strike in his first pass back in action. 🏈 pic.twitter.com/rScdLZkbBV

Dak Prescott and CeeDee Lamb connect for the Cowboys TD to tie it up. 🏈 pic.twitter.com/rEOePXZh4Y

Dak Prescott with a dime to Amari Cooper for a Cowboys TD.

Dak through the 3rd quarter:

It was an extremely encouraging performance. And because of that…

The Cowboys’ brass has to be thrilled with what they saw

It’s a heartbreaking and frustrating loss, but the Cowboys were a nine-point underdog on the road against the defending champions in prime time, and there quarterback was playing his first game in nearly a year after suffering a brutal injury. And they had the lead in the seconds. They were very much in the game throughout it, and could’ve won with some better execution here or there (like with Zuerlein making his kicks earlier in the game).

The Cowboys leave that game knowing that they can hang with the league’s elite teams on the road. Dallas knows for sure now that they have a very explosive passing offense in a quarterback’s league. And they’re likely to get the running game going in the coming weeks, featuring what could be a dynamic duo with Ezekiel Elliott and Tony Pollard.

It’s absolutely a team with a lot of flaws and concerns (particularly on the defensive side of the ball), but so is everybody in the NFC East, and so are most teams in the NFC.

The Bucs are still the team to beat in the NFC

Perhaps in the entire NFL too, but it’s hard to argue with anyone that would suggest the Kansas City Chiefs either.

Tampa Bay can play better on both sides of the ball than they did in this game, but their talent is evident, and they’ll likely clean some things up as the season goes on.

Now, the running game is a concern: Fournette had the drop that led to an interception, and had nine carries for just 32 yards, while Ronald Jones had four carries for 14 yards and fumbled in the second quarter (and was seemingly benched). The Bucs ran for a first down just once.

But odds are that they’ll iron things out on that front, or make an outside addition in the coming weeks. At the very least, Brady and that passing game look locked in, and there’s no reason to think that won’t continue all season.