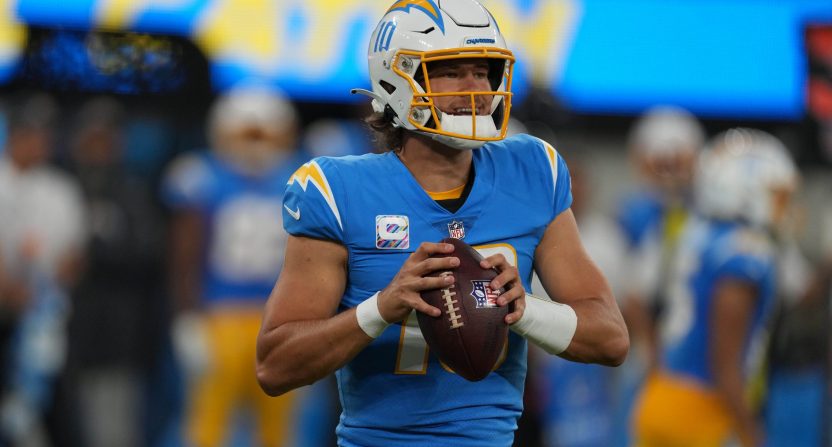 The Los Angeles Chargers took down the Las Vegas Raiders 28-14 on Monday Night Football at Sofi Stadium- after a weather delay that took everybody by surprise. Here are our main takeaways from the Chargers’ win:

The Chargers dominated this game through one half, taking a 21-0 lead into halftime. But the Raiders woke up in the second half with two third-quarter touchdowns, and they also had the crowd in their favor in what felt like a home game (after all, the Raiders played in Los Angeles from 1982-1994, and the Chargers just moved to L.A. in 2017). Derek Carr connected with Hunter Renfrow (who also showed off *defensive* skills on special teams) and Darren Waller for Las Vegas touchdowns to make it a one-score game.

Derek Carr to Hunter Renfrow for the Vegas TD. The Raiders are finally on the board in the third quarter of MNF. 🏈 pic.twitter.com/HFzONmOsP0

It's quite difficult to stop Darren Waller on a jump ball. 💪

However, Austin Ekeler ran for a Chargers touchdown with 5:20 remaining to give the Chargers a 28-14 lead, and Derwin James put the game away with an interception.

Austin Ekeler with some tough running for the Chargers TD. 28-14. ⚡️🏈 pic.twitter.com/omQzqxQqOw

Derwin James picks off Derek Carr as the Chargers try to close it out. ⚡️🏈 pic.twitter.com/SxYKjLj8AG

Justin Herbert is a full-on superstar

That’s not really news to many football evaluators and fans, but Herbert put his skills on full display with a great performance on Monday Night Football. Herbert completed 25-of-38 passes for 222 yards, three touchdowns, no interceptions, and a 107.6 passer rating.

Justin Herbert to Jared Cook for the Chargers touchdown on 3rd-and-8!

Justin Herbert with the DIME to Austin Ekeler. 21-0 Chargers in the first half of MNF. ⚡️🏈 pic.twitter.com/dlWCqGJLT7

That follows up a win over the Kansas City Chiefs in which Herbert threw for 281 yards, four touchdowns, no interceptions, and a 125.0 passer rating. He’s made 220 straight pass attempts without an interception vs AFC West opponents.

And he’s just 19 starts into his NFL career. He’s a special quarterback that may just keep getting better, and for a long while.

Brandon Staley gets it

The Chargers’ wins over the Chiefs and Raiders each featured Los Angeles going for it on fourth down twice in the fourth quarter. They’ve been aggressive calls for Staley, and the first-year head coach has been rewarded for his decisions.

In Monday night’s game, Staley opted to go for it on 4th-and-2 at the 50-yard line while leading 21-14 in the fourth quarter, and Herbert and tight end Jared Cook connected for a first down. Most coaches would’ve punted. The Chargers went on to score a touchdown (Ekeler’s score shared above) later in the drive that basically put the game away.

Louis Riddick was all over this 4th-and-2 call from the Chargers. 🏈 pic.twitter.com/xiDn4UD0Bb

Chiefs are in last place in AFC West

This division is bonkers. The Chargers, Raiders, and Denver Broncos are 3-1, while the Chiefs are 2-2.

Kansas City should probably still be viewed as at least the slight favorite at the moment, but the Chargers are very much for real and can win this thing- they have the quarterback, head coach, and necessary ingredients to win in the modern NFL, with the upside to get much better. The Chargers have already shown that they can beat the Chiefs — and another win over Kansas City would result in winning the head-to-head tiebreaker — and the Raiders, and they’ll be clear favorites each time over a Broncos team that doesn’t have a quarterback to match the firepower.

And it’s going to be like this for many years to come- the Herbert vs Mahomes battles could become this era’s Brady-Manning, twice a year.

The Raiders entered this game as the only undefeated AFC team and just one of two undefeated teams in the NFL. So now it’s just the 4-0 Arizona Cardinals, a team that nobody would’ve been surprised to see finish last in the NFC West.