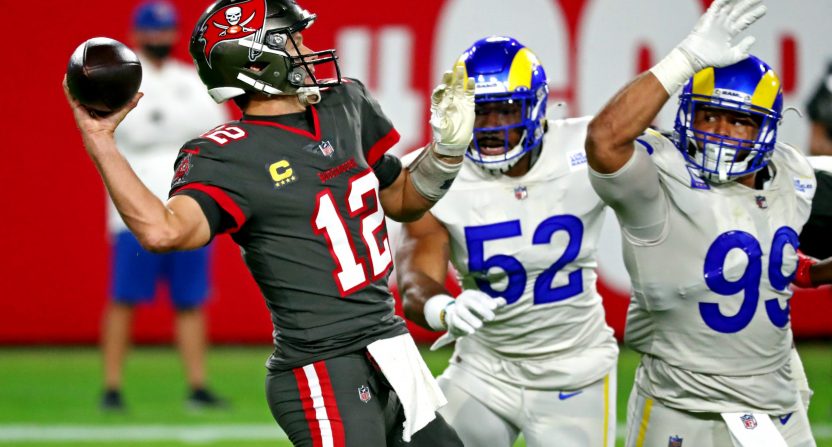 The Los Angeles Rams went into Tampa Bay and took down the Buccaneers 27-24 on Monday Night Football. Here are our takeaways from the Rams’ win:

After an ugly loss to the Miami Dolphins in Week 8, the Rams have rebounded — following a Week 9 bye — with impressive wins over the Seattle Seahawks and Bucs. Monday night was a clear statement that this is a really good all-around football team capable of a deep run in a wide-open NFC. And the victory puts the Rams (7-3) in a tie for first place with the Seahawks, but Los Angeles currently holds the first half of the head-to-head tiebreaker thanks to that Week 10 win.

Brady was brutal on pass attempts of 15-plus yards downfield in this game, completing 1-of-9 passes for 18 yards and two interceptions.

Both interceptions were passes nowhere close to Tampa Bay receivers, and right to Rams safety Jordan Fuller. The second interception essentially closed out the game.

This dud of a performance by Brady comes after he threw three interceptions with a 40.4 passer rating vs the New Orleans Saints on Sunday Night Football in Week 9 (more on that later). Brady looked like a legitimate MVP candidate for much of the season, but these two primetime performances have killed those chances.

While Goff put up big passing numbers in this one (he did throw two interceptions, though), a lot of it was thanks to the Rams’ playmakers at wide receiver. Kupp had 11 receptions for 145 yards, and Woods had 12 receptions for 130 yards and a touchdown.

Woods (and also watch Kupp with the block and hustle) had a huge play in the final seconds of the first half, taking a screen pass 35 yards to get the Rams into position for a go-ahead field goal. This was a huge play in a three-point victory.

Robert Woods takes a screen pass 35 yards, and the Rams spike it with 1 second left to set up a field goal for the lead. 17-14 Rams at halftime. #MNF pic.twitter.com/xHuOqoUbAm

The Bucs have been awful in primetime

Considering the history of Brady in big games, to go with a lot of decorated veterans on this Tampa Bay roster, it’s a bit surprising — and concerning — how poorly they’ve played in primetime.

The Bucs are 1-3 in primetime games this season, with losses to the Rams, Saints (a 38-3 curb-stomping in Tampa Bay), and Chicago Bears (who are 1-4 since that game). Tampa Bay’s only primetime win was a 25-23 victory over the terrible New York Giants in Week 8, and the Giants were a two-point conversion away from tying the game with 28 seconds left.

Not only are the Rams in first place in the NFC West, but they also are all the way up to the NFC’s No. 2 seed. They’re just one game behind the 8-2 New Orleans Saints for the conference’s one playoff bye. Had they lost on Monday night, they would’ve been at the bottom of the NFC playoff standings (the Arizona Cardinals are the No. 7 seed at 6-4, and the Rams still play them twice). Additionally, they possess a potentially huge tiebreaker over the Bucs (7-4), to go with already having a tiebreaker over the Chicago Bears (5-5, and the first team out of the playoffs). The Rams are all of a sudden in excellent shape, and they still have a home game against the New York Jets remaining on their schedule.

The Bucs, on the other hand, have seen their outlook take a big hit over the last three weeks. Five Thirty Eight gives Tampa Bay just a 14% chance to win the division now. The standings make it appear that the Bucs are just 1.5 games behind New Orleans in the NFC South, but the Saints locked up the head-to-head tiebreaker with two wins vs Tampa Bay this season. If Tampa Bay wins out to get to 12-4, they still need the Saints to go 3-3 or worse in order to win the division. And again- the Bucs now have to play the Chiefs, who will be favored.

Now, the Bucs (currently the No. 6 seed) are still likely to make the playoffs (Five Thirty gives that an 81% chance), and their schedule does soften significantly after the Chiefs game (and after a Week 13 bye): vs Minnesota Vikings, at Atlanta Falcons, at Detroit Lions, vs Falcons. But to contend for a Super Bowl, they will have to play much better football than they have lately, and especially better than they have in primetime.