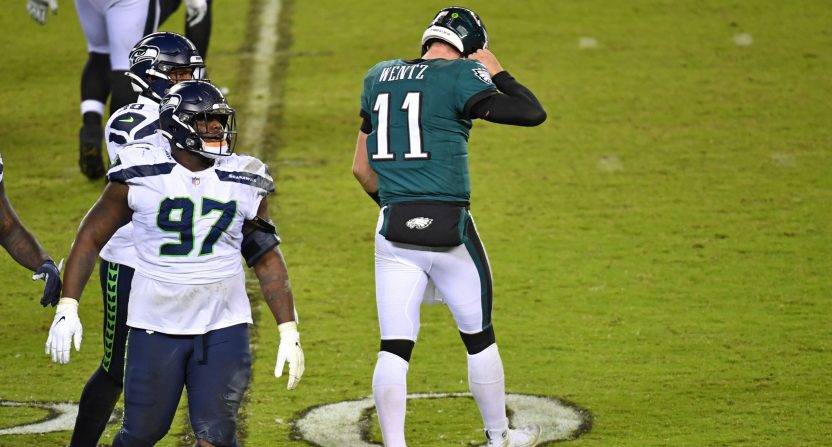 The Seattle Seahawks took down the Philadelphia Eagles 23-17 on Monday night at Lincoln Financial Field. Here are our takeaways from Seattle’s win:

A quality all-around performance by Seattle

This game wasn’t as close as the score suggests. Philadelphia got a Hail Mary and two-point conversion (more on that later) in the final seconds to make the game seem closer than it actually was. Seattle was in full control in the first half, taking a 14-0 lead and dominating in the yardage department (more on that later too).

Chris Carson with a great effort for the Seahawks TD. 14-0 Seattle. #MNF pic.twitter.com/UD3YOHAvef

Russell Wilson played an efficient game, completing 22-of-31 passes for 230 yards, one touchdown, zero interceptions, and with a 102.9 passer rating. And most of those yards were on passes to DK Metcalf, who continues to have an incredible sophomore season. Metcalf had 10 catches for 177 yards.

Defensively, Seattle played very well (and significantly better than they were earlier in the season), with All-Pro safety Jamal Adams flying around the field.

TOO FAST. There's @Prez with the sack on Carson Wentz! 😤

The Eagles’ offense is a total mess

Philadelphia didn’t get a first down on their first five possessions, and totaled four yards over that stretch. They had nine points until their garbage-time touchdown with 12 seconds remaining. Carson Wentz averaged 4.8 yards per pass attempt (and again- had some stats padded in garbage time).

This play summarizes how the Eagles' offense has looked in the first half. #MNF pic.twitter.com/9mmtmSEMA5

"And there's the interception!'- Steve Levy saying that like he expected the Carson Wentz pick 😂. pic.twitter.com/BL5QHUUTYg

This is not in the same universe as the Wentz-led Eagles’ offense we saw over the previous few seasons. Which leads to the next question…

Is it time to go to Jalen Hurts?

That’s debatable, but it’s worth asking! It’s entirely possible Hurts is even worse, perhaps quite a bit worse. But it’s also possible the second-round rookie does improve things, and we at least know it’s not working with Wentz (who has thrown 16 touchdowns and 15 interceptions this season). Maybe it works with Wentz again down the road, but we’ve seen enough to assume that isn’t happening in 2020.

Incredibly, the 3-7-1 Eagles are still very much alive in the division title race, because the NFC East is a tire fire. The New York Giants and Washington Football Team are currently atop the division at 4-7. *Maybe* the other guy can provide a spark and lead the Eagles to a division title. That would be quite a story- both for this season and the offseason, in terms of what it means for Wentz’s future in Philadelphia.

Seattle has a real shot at the No. 1 seed

The Seahawks are now 8-3, just one game back of the New Orleans Saints for the NFC’s No. 1 seed- which is even more coveted this year, due to the postseason format only having one bye in each conference. Drew Brees is still out for the Saints, and New Orleans’ upcoming schedule includes a game against the Kansas City Chiefs. So, odds are another loss or two is on the way for New Orleans.

And Seattle’s schedule is pretty favorable on paper. It’s even the easiest remaining schedule in the NFL, at least if we go only by winning percentage. They have cupcakes at home over the next two weeks against the Giants and New York Jets. They follow that up with a very favorable game at Washington. Their final two games should be tougher, with a home game against the Los Angeles Rams in Week 16, and a Week 17 road game against a San Francisco 49ers team that is back to playing good football. Still, the Seahawks will be favored in each of these games and have a legitimate chance to run the table.

Goodness, what a bad beat

The Seahawks were 6.5-point favorites and took a 14-point lead into the final minute. With 12 seconds left, Wentz threw a Hail Mary pass that was tipped in the end zone, and Philadelphia tight end Richard Rodgers made a ridiculous one-handed catch for a touchdown.

That made it an eight-point game, and then Doug Pederson did a very Doug Pederson thing in deciding to go for two. Sure enough, the two-point attempt was successful on a Miles Sanders run, making it a six-point game.

This is an unbelievably bad beat, and Scott Van Pelt didn’t waste any time alluding to it when receiving MNF’s handoff to SportsCenter.

The Seahawks beat the Eagles 23-17, with Philadelphia getting a Hail Mary TD in the final seconds.

Seattle was favored by 6.5 points.

Scott Van Pelt: “Well. That was significant to some.” pic.twitter.com/mHtsRcRWXH

And later while doing the highlights:

“Later he would complete a pass… that was of great interest to many of you. And then a little two-point conversion, also interesting to some. And as a result it’s a six-point road win. Six-point.”-SVP pic.twitter.com/f40xYd8oBU

Significant to some indeed, and especially to this person that bet $500,000 on Seattle. Ouch.

Someone just dropped half a milly on Seattle -6.5 for MNF tonight