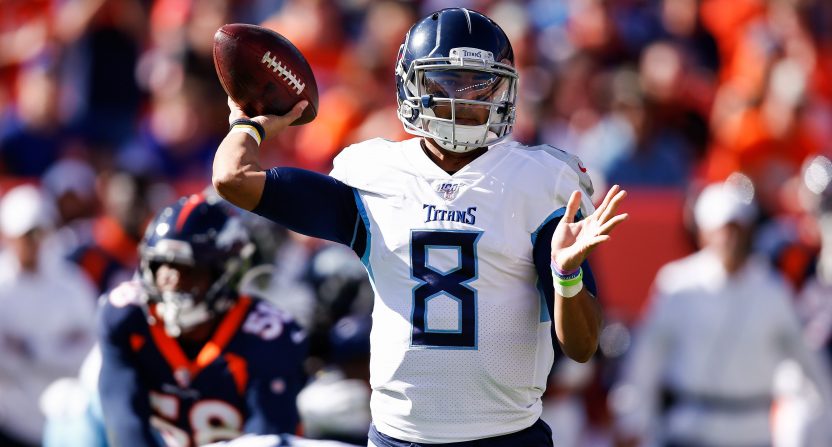 Marcus Mariota and the Tennessee Titans are heading towards divorce. The second overall pick of the 2015 NFL draft hasn’t lived up to expectations. And the Titans have done a terrible job of developing him. Mariota turns just 26 years old next week and still possesses the raw physical talent that made him a coveted prospect.

Here are five teams that should consider Mariota in the offseason:

Replace the No.1 overall pick of the 2015 draft (Jameis Winston) with the No. 2 overall pick? They both have had disappointing careers, but Mariota has been statistically better. He has a better career completion percentage (62.9% to 61.4%), passer rating (89.6 to 87.5), and lower interception percentage (2.5 to 3.2). Plus, Mariota has won a playoff game, an 18-point comeback victory over the Kansas City Chiefs. Remember when Mariota completed a TD pass to himself?!?

If QB whisperer Bruce Arians can’t fix Winston, no one can. Arians is 67. He might not want to mentor a young passer. Why not kick the tires on Mariota?

New England needs a succession plan. Tom Brady is 42 years old. And while it seems like he might win Super Bowls as an octogenarian tethered to an IV drip, eventually he’s going to retire.

Bill Belichick has proven he can win games with Jimmy Garoppolo, Jacoby Brissett, and Matt Cassel. That’s a second rounder, a third rounder, and a seventh rounder. Imagine what he could do with Mariota, probably the most physically gifted quarterback Belichick’s had since Vinny Testaverde (when Belichick coached the Cleveland Browns in the 1990s). Mariota would finally have a coach that would maximize his strengths and minimize his deficiencies.

Belichick is 67. How eager will he be to develop a rookie QB? And imagine unreasonable expectations of following Brady? Why not go with a veteran who will be better equipped to handle this scenario? Plus, Belichick would love Mariota, who never says anything controversial or remotely interesting. Belichick and Mariota would form the league’s least quotable coach-QB tandem.

This is a BIG if. Teddy Bridgewater’s stock has never been higher after leading the Saints to a 5-0 record in Drew Brees’ injury absence. In the off-season, Bridgewater signed a one-year, $7.5 million contract with the Saints – making him the highest paid backup in the league. You figure that Bridgewater’s eventually going to want long-term security and a legitimate shot at being a starter.

IF Brees retires after this season, Bridgewater would be the natural successor. According to this advanced metric, he’s been a better quarterback this year than starters Garoppolo¸ Winston, Jared Goff, and Joe Flacco. But if Brees decides to stick around, Bridgewater probably could get a starting job elsewhere. That would open the door for Mariota. Why not sit for a year under Brees, learn, and then eventually take over? Also, Sean Payton could work in gadget plays for Mariota – the same way he uses Taysom Hill. Mariota is one of the NFL’s fastest QBs.

This is a tricky one. There are a lot of unknowns with the Steelers. Will Mike Tomlin be back? He’s only under contract through 2021, and there are rumors that Tomlin is high on the wish list of the Washington Redskins. Does Ben Roethlisberger have anything left in the tank? He’ll be 38 next season, coming off elbow surgery, and he’s never been in the best physical condition.  Roethlisberger also only under contract for two more seasons. We could be seeing the end of the Tomlin- Roethlisberger era.

Unless the Steelers are sold on Mason Rudolph or Devlin Hodges, they should probably consider a veteran. Don’t think you can count on Roethlisberger being healthy enough to start all 16 games. Mariota would be a solid insurance policy. Plus, he’s someone you can groom to be Roethlisberger’s eventual replacement. This scenario seems more likely if Tomlin stays. A new coach would likely want to draft a new quarterback.

This would strictly be a one-year move. Washington isn’t the ideal situation for anyone. However, when the musical chairs at starting quarterback jobs winds down, this might be the best – and only option. Owner Daniel Snyder wants Dwayne Haskins to be the guy. But let’s say that Jay Gruden is correct, and Haskins is far from ready. Then Washington is going to need a veteran for 2020 while Haskins sits back and learns. Mariota could be a solid choice and then hit the market again in 2021 when his options might be more plentiful.

Now, a lot is going to depend on who Washington hires as head coach. If the team can bring in Tomlin, Mariota makes a lot more sense for a stopgap move. However, if Washington beings in a rookie coach or someone from the college ranks, then it’s likely that – ready or not – Haskins will start.