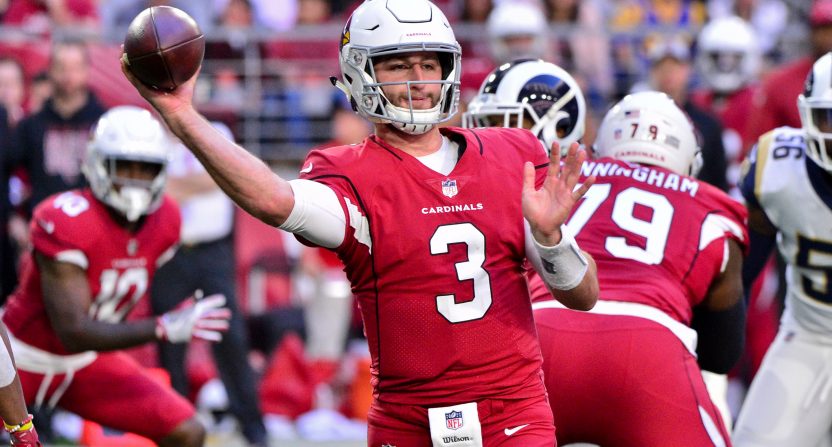 The Arizona Cardinals have a choice to make. With the first pick, the Cardinals can get anyone they want, and reportedly, they’re high on Kyler Murray from Oklahoma. The issue is that while the Cardinals see Murray and want him, they just drafted Josh Rosen last year in the hopes he would be their franchise quarterback.

Rosen played in 14 games and had an arguably average season. His stats weren’t anything to write home about, but after getting thrown into the deep end with a bad team, it might be too early to tell whether or not Rosen will be a bust or a star.

If the Cardinals draft Murray, it likely means they’ll trade Rosen to make that happen. The Cardinals have multiple spots to fill, and taking a quarterback in the first round in the past two years looks bad unless Rosen is traded. It sucks for Rosen, because not only is he learning how to play in the pros, he’s getting traded to some other team. It might mean he goes to a better team and feels like he doesn’t need to do everything, or maybe he goes to a team with an experienced quarterback that he can learn from and improve. Or, this could mean Rosen goes to a team just as bad (or even worse) and his career will be more difficult.

These five teams may or may not be interested in Josh Rosen, but for one reason or another, the match could work for both the team and player.

Don’t kid yourself, this probably has a 1 percent chance of happening for a variety of reasons, but this wouldn’t be a bad move. The Patriots are incredible at making trades and probably would be able to lowball the Cardinals with a late draft pick. Also, the Patriots can afford to give up a pick since they have the most draft picks (12) this year.

At the same time, given what allegedly went on while Jimmy Garoppolo was in New England, Tom Brady probably wouldn’t like this move and he would likely have a say in this. If Brady still feels like he has at least a few years left, he’s won’t want to have a repeat of the Garoppolo situation and train someone who may push him out the door before he retires.

Jameis Winston is in Tampa Bay, but at some point, the Bucs have to figure out if he’s their QB for the long haul or if they can potentially get someone better. Winston’s stats may not be bad- he’s thrown over 4,000 yards in his first two seasons, but has a 21-35 record and has so many off-the-field problems that it may make sense to start anew.

Rosen may be unproven, but it’s a low risk move for a team in the middle of a rebuild. With just six draft picks, the Buccaneers may be hesitant to send a pick to the Cardinals, but getting a starting quarterback as well as the fifth pick could jump-start the Buccaneers to get out of this funk.

The Denver Broncos need a quarterback, and they haven’t been afraid in letting people know about that considering they just traded for Joe Flacco. Obviously, Flacco is going to be the starter so this door may have shut on Rosen, but Flacco is a short-term solution and his recent time in Baltimore wasn’t that great. Having Rosen would at least be a solid option in case Flacco doesn’t work out.

On the other hand, if I’m Rosen, I might be worried about going to Denver. Denver seems like a great place to live and they have a team that’s trying to get back on track, but being liked by John Elway — his evaluation of quarterbacks (that aren’t named Peyton Manning) has been terrible — would be like receiving the “Kiss of Death” from Michael Corleone. It might be a blessing in disguise for Rosen that Elway and the Broncos went after Flacco.

A situation similar to the Patriots — other than the team is worse and the home market scrutiny will probably be more severe — and an ideal situation for Rosen. Eli Manning doesn’t have the kind of power Tom Brady has, so he may be more welcoming to Rosen and show him the ropes while he either retires or heads to another team for the final part of his career.

The Giants have the pieces in line that they are just ripe for someone to step in and improve the team. It’s too early to say whether or not that person is Josh Rosen, but it’s not a bad set-up.

The team who is reportedly most interested in Rosen is Washington and it makes sense. The Redskins probably weren’t expecting to be shopping for a quarterback, but after Alex Smith broke his leg so gruesomely that it may end his career, they have to go get someone in the meantime.

Every indication seems that Smith wants to come back, and the team wants him to come back at some point, but there are a lot of unknowns right now. It’s not a guarantee that Smith will be the quarterback he once was and the Redskins need to have a backup plan in place- one that’s not Colt McCoy. And with the money they’re paying Smith, the Redskins can’t really afford to take on another big-money quarterback so Rosen makes sense while they figure out Smith’s situation. Washington is kind of stuck and getting Rosen would calm some fears within the team.