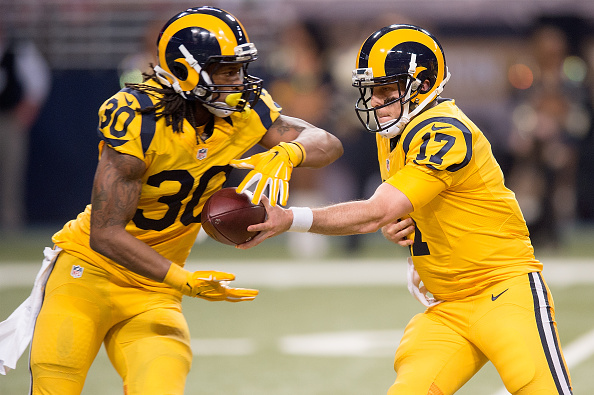 If the Rams aren’t already a lame duck in Week 15 of the 2015 season, think about next year. Considering they still might be playing in St. Louis in 2016 and not in Los Angeles, where team owner Stan Kroenke really seems to want to call home, and considering they’ll most likely still be coached by Jeff Fisher, how could any St. Louis resident be excited about this organization?

The team doesn’t have a quarterback, and it hasn’t made the playoffs since 2004 (the Rams actually haven’t had a winning record since 2003). So, why should Rams fans bother continue to support the organization, spending their money on parking, tickets, and concessions when it seems probable that the team will be absconding the city as soon as it can?

Because, as St. Louis showed Thursday night in its 31-23 win vs. the Buccaneers, the Rams have the makings of a fantastic core that could make the organization a captivating NFL presence for the first time in more than a decade.

The quarterback position is in flux and it’s probably time to get Fisher off the sidelines — do you remember the last time he made the playoffs? — but some of the performances Thursday showed just how potent this roster can be. And how much fun they are to watch.

Yet, St. Louis, despite all of its good work vs. the Buccaneers, has two major questions: who’s the franchise quarterback and who should be coaching the team?

As for question No. 1, the Rams thought they were acquiring that kind of quarterback when they picked up Nick Foles in exchange for Sam Bradford last offseason. Making matters worse, St. Louis gave Foles a contract extension in August, tying even more money into a guy who’s currently earning his paycheck on the bench.

But can the Rams really entrust their organization to Case Keenum? He was fantastic Thursday, completing 14 of 17 passes for 234 yards and two touchdowns, but for most of his career, when he’s been given the chance to start, he’s been mediocre or worse. Maybe the Rams should keep him if they’re lame ducks next year, but for the future, they need to find somebody else.

And as for Fisher?

It’s hard to say why he’ll continue to have a job. If it was almost any other NFL coach, Fisher would be on the most sizzling of hot seats. He’s never won more than seven games in a year during his four seasons in St. Louis, and in his last 11 seasons of coaching (in Tennessee and St. Louis), he’s made the postseason just twice. And remember, the Rams were 4-3 this season before losing five straight to knock themselves out of the playoffs. Fisher always seems to be so well-respected around the league, but he never actually wins anything.

“I’ve been doing this for probably short of 20 years, and I’ve never gone into a game or into a season worried about my job security,” Fisher said earlier this month. “That would be unfair to the organization and unfair to the players.”

But what about the fans? Isn’t all of this unfair to the people who seem not to know what to do or for whom they should root.

Edward Jones Dome breaks out in a "Keep the Rams" chant.

It is, indeed, a confusing time to be a St. Louis Rams fan. Or a coach. Or a player. Or a front-office executive. Maybe even an owner. But Thursday’s victory was a fun one to watch. Sometimes, in the most disappointing of seasons and with a future filled with fog, that’s a win in itself.