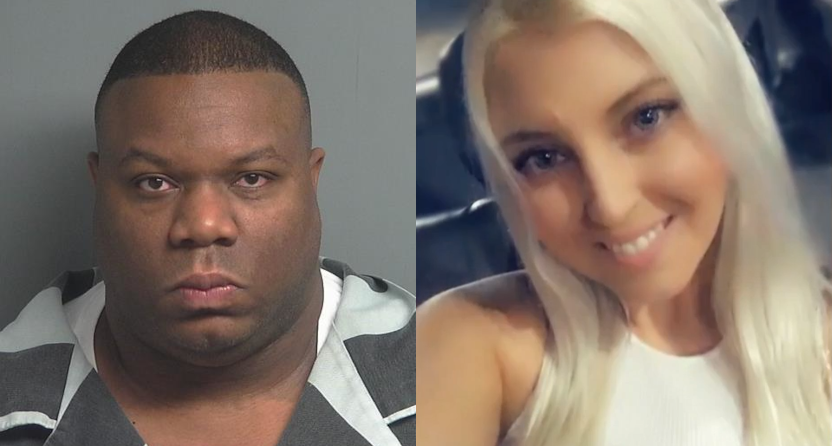 Kevin Ware has been indicted on murder and tampering with evidence charges in the death of his girlfriend, Taylor Pomanski. Ware (seen at left above in an April 2021 mugshot), 41, is a former NFL tight end who played for Washington and San Francisco. Pomanski (seen at right above), his 29-year-old girlfriend, was last seen at a party at her home in the Houston suburb of Spring last April 25; remains were found in a Houston-area search last December, and identified as her remains this April. Now, Ware has been charged with murder and with tampering with evidence, with the latter charge being specifically about tampering with Pomanski’s corpse.

Former NFL player Kevin Ware was indicted Thursday for murder and tampering with evidence, specifically a corpse, in the death of his girlfriend, Taylor Pomaski.

“We appreciate everyone who has come forward to provide evidence and aid in our investigation,” said Lacy Johnson, a chief prosecutor in the Major Offenders Division, who is handling the case. “Although this investigation has been going on since Taylor’s disappearance in 2021, the court process is just beginning, and we encourage anyone who has knowledge about what happened between Kevin and Taylor to come forward.”

If convicted of murder, Ware faces the possible sentence of 15 years to life in prison.

“Prosecutors presented the evidence to a Harris County grand jury, which determined there was sufficient evidence for criminal charges,” said Harris County District Attorney Kim Ogg. “We will follow the evidence wherever it leads and apply the law equally to all.”

Ware is currently jailed in Montgomery County, north of Houston. He was first arrested on charges of  unlawful possession of a firearm by a felon and possession with the intent to deliver controlled substances last April 19, after a speeding stop found him with cocaine, methamphetamine, marijuana, a loaded AK-47, and a loaded 9mm pistol, but he was released on bond. He was arrested again last June 11 for failing to appear in court and check in with the probation office, as well as for violating bail conditions with possession of drugs, and was denied bail after that. Now, he’s also facing these charges of murder and tampering with evidence.

Ware played college football for the Washington Huskies from 1999-2002. He then signed with Washington in the NFL as an undrafted free agent in 2003 and played 11 games with them that season. After that, he played five games with San Francisco in 2004.

This isn’t Ware’s first run-in with the law. Back in 2001, he was charged with felony assault for striking a police officer during a bar incident, then pled guilty to misdemeanor assault and received a suspended sentence. 2010 saw him charged with theft and with escaping from police after his arrest following a bar incident. 2018 saw him sentenced to a two-year prison term for intent to manufacture or deliver a controlled substance, and 2021 saw those further weapon and drug charges. We’ll see how the murder charge proceeds against Ware.