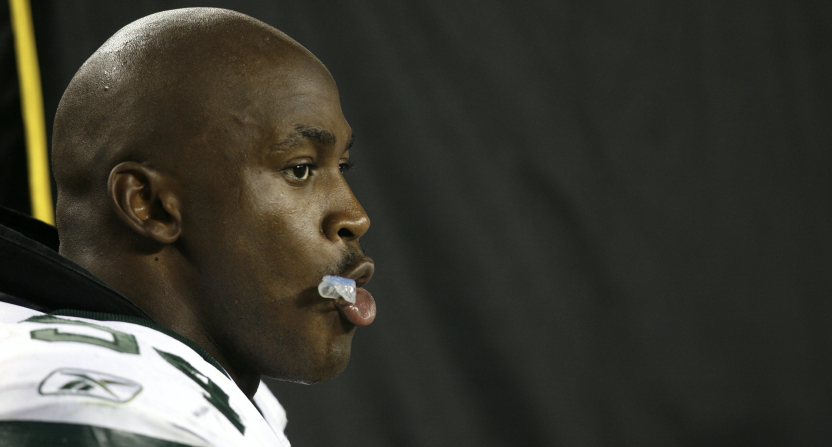 After refusing to sign a document that needs legal translation services to do proofing, he previously agreed to sign and then refusing to comply with the judge, former Packers defensive end Kabeer Gbaja-Biamila was tased and arrested for contempt during his divorce court case.

According to the Green Bay Press-Gazette, Gbaja-Biamila was sentenced to six months in jail for contempt for refusing to sign a document he had previously agreed to sign. After 10 Brown County, Wisconsin sheriff’s deputies tried to get Gbaja-Biamila to comply with the judge’s arrest order, he refused and was then tased and handcuffed. Gbaja-Biamila eventually signed the document and the contempt charge was dropped but because he resisted arrest, that charge stood.

Gbaja-Biamila has a past when it comes to dealing with the law. As the Press-Gazette noted, Gbaja-Biamila has represented himself multiple times in court and has invoked his religious beliefs as a reason to be a sovereign citizen.

Gbaja-Biamila, as he has done on a number of occasions, represented himself in the legal proceedings. He’s tried to convince a series of judges and court commissioners of his theory of sovereign citizenship and the belief that his religious views supersede civil law.

He spent considerable time quoting the Old Testament in defense of his position that the civil court had no jurisdiction over him. [Judge Donald] Zuidmulder was initially patient, even after Gbaja-Biamila interrupted him at the start of the hearing, and then he wasn’t.

“I’m not communicating, I’m ordering,” Zuidmulder said, after explaining to Gbaja-Biamila that he could not rescind an earlier agreement to release certain investments to his ex-wife.

The judge seemingly gave Gbaja-Biamila an opportunity to explain himself and it’s noted that the judge was patient even though Gbaja-Biamila interrupted him and then tried to lecture him in his court about the U.S. and state constitutions, noting “I have my own laws which are superior.” An attorney tried to help Gbaja-Biamila get bond but he didn’t want representation because he “did not want to become ‘a ward of the state.'” Gbaja-Biamila eventually was bonded out of jail early in the afternoon.