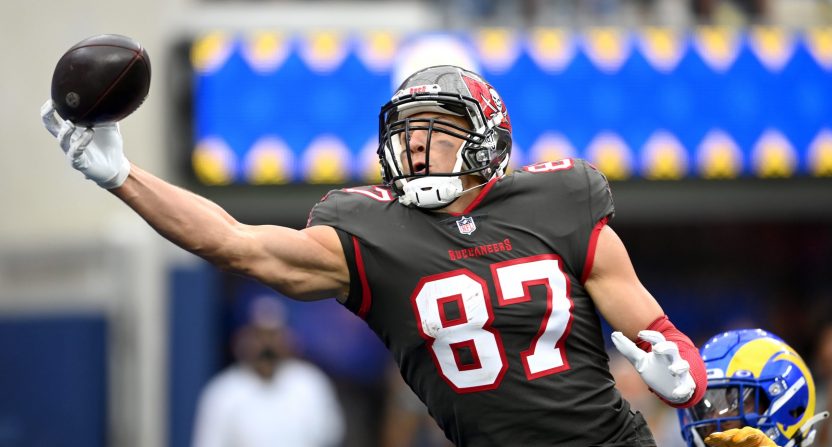 The Tampa Bay Buccaneers travel to Foxborough this Sunday to take on the New England Patriots. Naturally, the big story is Tom Brady’s return for the first time since leaving the Pats. However, he’s not the only former Patriot who will be returning to the team where he won multiple Super Bowls.

Rob Gronkowski followed Brady to Tampa last year and the two were a huge part of why the Bucs won the Super Bowl while the Patriots went into rebuilding mode. Now both of them are back in Gillette Stadium for the first time since leaving. However, it looks like it’s unlikely that Gronk will actually make it on the field.

While Tom Brady might have looked rough on Thursday, he’s still ready to go for the big reunion. Gronk, however, has been listed as doubtful on the team’s injury report.

Gronkowski suffered a rib injury against the Los Angeles Rams last weekend and it sounds like it hasn’t fully healed up.

Here’s the hit on Gronkowski pic.twitter.com/KDhUUhDCIe

Gronk did practice today so it’s not out of the realm of possibility that he could still play this Sunday. Bucs head coach Bruce Arians said he would be a game-time decision. After all, this could also be a chess move meant to mess with Bill Belichick and the Pats as they plan for the Tampa offense.

It would be a bummer if Gronk couldn’t go on Sunday and it will certainly impact the way Brady gameplans. We’d also miss out on the chance to see a classic Brady-to-Gronk touchdown in the old stomping grounds. But we have a feeling Brady will find a way to get it done, with or without his favorite touchdown target.