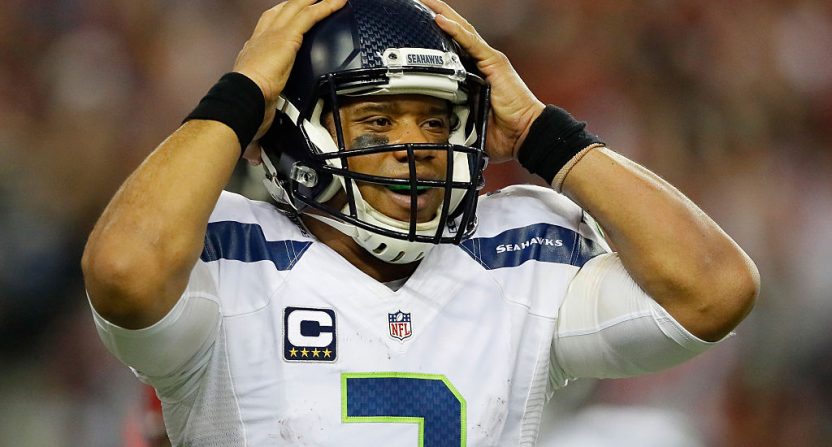 In shocking news, a team’s former players since released or cut are griping about that team’s management and stars anonymously. Sports Illustrated has an article on the Seattle Seahawks called The Dynasty That Never Was: Inside the Unraveling of the Seattle Seahawks, penned by Greg Bishop and Robert Klemko with further reporting from Albert Breer, includes a whole lot of complaints from former players about how from 2014, in particular, quarterback Russell Wilson supposedly received preferential treatment from head coach Pete Carroll and GM John Schneider.

None of that’s necessarily surprising; most teams treat their quarterbacks with different rules than their other players, and a lot of the complaining here seems very self-serving and very much missing the point. However, there’s one allegation that’s particularly interesting, suggesting that the Seahawks’ doomed pass play from the one-yard line in 2015’s Super Bowl XLIX was called to get Wilson the MVP:

That Wilson threw an interception mattered less than the fact that the Seahawks had called a pass play on second down. Many who lamented how Wilson was treated differently now believed, truly believed, that Carroll had called a pass play to give Wilson a better chance to win the Super Bowl MVP award and decrease Marshawn Lynch’s chances, perhaps conveniently ignoring that offensive coordinator Darrell Bevell might have actually called the play. Regardless, the players say, that call contradicted what Carroll always said publicly: that he wanted to run the ball and play great defense, that that’s how he built the Seahawks—to be tough and stop foes and let Lynch bulldoze Seattle to victory after victory. Again, several players felt that Carroll said one thing and did another, and this time it had cost them a repeat Super Bowl title. (Such a view disregards the fact that the Seahawks defense missed 18 tackles and allowed the Patriots 196 yards-after-catch in the game.)

“That’s when some guys started to openly question whether [Carroll] believed in his philosophy,” says [former DE Cliff] Avril, who says he still trusted the coach at that point. “Guys started to be like, do you even believe what you’re saying?”

Some Seahawks still remember every detail from that night. Sherman pacing back and forth, wearing his frustration into the carpet in that locker room in Arizona. Lynch, fully dressed, downing a bottle of cognac, saying “These motherf—— robbed me,” and “f— this,” over and over. “If we gave the ball to the soul of our team and we lose, f— it, we lose,” one Seahawk says. “Point-blank, period. You lost doing what you do best. But he gave it to Russ. I didn’t believe the MVP thing at first. But now I wonder. It’s at least plausible.”

It seems hard to believe that (and as the authors note, Carroll likely didn’t call that play, and Seattle’s defense struggled in that game too; no close loss is ever just about the final seconds), but it’s interesting that players would throw that out there, even anonymously. And really, the larger takeaway from this piece may be the overarching discussion of Carroll allegedly saying one thing (building a team around competition and performance and equality), but doing another (treating his star quarterback like, you know, a star quarterback).

And maybe that goes to show that it’s tough to live up to standards of universal treatment, or that a competition-focused atmosphere doesn’t always work for everyone, or just that it’s far easier to change out even the best defensive players than to get a new franchise quarterback. Or that, as also noted in the piece, winning paves over a whole lot of personal slights, and losing causes a whole lot of personal grudges to come out.

But it is notable to see players outright say (even anonymously) that they think Carroll would have tried to orchestrate that ending not in the way most likely to win the game, but in the way most likely to get Wilson an award. Again, that seems rather improbable given the importance of winning the title, but it’s interesting that it made it out there. And that does speak to the widespread dissent against Carroll, and against how his regime supposedly changed from an egalitarian one to a quarterback-focused one. But maybe that shows the issues of trying to take that egalitarian approach in the first place, and trying to tell even the best defensive players they’re going to be treated the same way as the star quarterback.

NFL quarterbacks are special, and most of them (the ones with any level of success, at least) do usually receive special treatment. They tend to be with their teams longer and to be much harder to replace. Perhaps the bigger issue in Seattle was those expectations not being clearly stated. And yes, Seattle had an amazing defense that was just as crucial to their success as Wilson if not more, and maybe they should have received more credit (although they did get a whole lot of press too, much more than most defensive units around the league). But it’s notable that most of the key players from that defense aren’t even in the league any more, while the 29-year-old Wilson could still have several great years left. If Carroll did choose to favor his quarterback rather than his outspoken defensive players, was he really wrong?