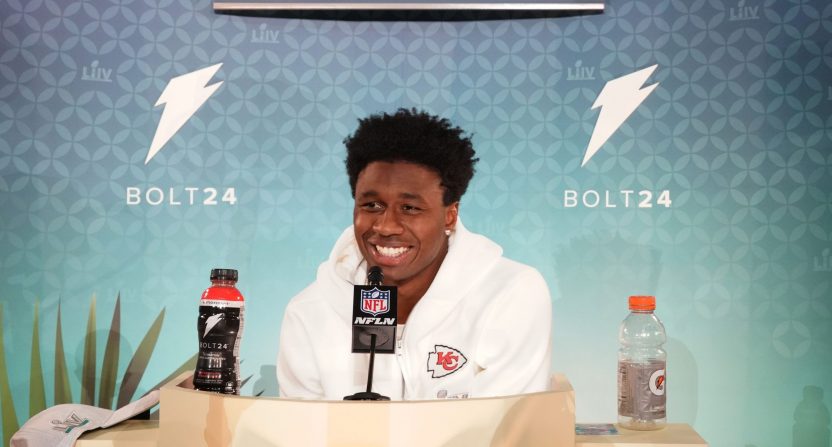 Super Bowl LIV between the Kansas City Chiefs and San Francisco 49ers is this weekend, and nobody knows what the hell to expect in what is supposed to be one of the closest championship games in modern NFL history. Hopefully, this game will be more entertaining than last year’s lullaby between the Los Angeles Rams and New New England Patriots.

1. The Chiefs will hold Raheem Mostert in check

The breakout running back had 229 yards and four touchdowns in the NFC Championship Game, but the Chiefs defense has improved immensely this season, and they’re going to sell out to shut down San Francisco’s running game. They want to force Jimmy Garoppolo to beat them, just as they forced Ryan Tannehill to do the same when they shut down the league’s hottest running back, Derrick Henry, in the AFC title game.

Henry, who rushed for 1,273 yards in eight games preceding that one, was held to just 69 yards on 19 carries against the Chiefs. Kansas City has now surrendered fewer than 110 rushing yards in seven of their last eight games, with front-seven defenders Chris Jones, Derrick Nnadi, Frank Clark, and Damien Wilson playing superbly against the run.

2. But Jimmy Garoppolo will take advantage

Everyone is overlooking the San Francisco quarterback, mainly because the 49ers have hardly needed him these playoffs. But the Chiefs will force Garoppolo to make plays, and you shouldn’t be surprised when he delivers.

In the final seven weeks of the regular season, Jimmy G completed a league-best 76.2 percent of his deep pass attempts for a passer rating of 117.7 on throws that traveled 15-plus yards. Among 29 quarterbacks who threw at least 40 passes in the fourth quarter or overtime of one-score games, he ranked sixth with a passer rating of 107.8. Meanwhile, his season-long third-down completion percentage of 69.2 ranked first among 36 signal-callers with at least 50 attempts under those circumstances.

Garoppolo can ball, and he’ll have his moments against a still-vulnerable Chiefs secondary.

3. Sammy Watkins will be an MVP candidate

Watkins caught seven passes for 114 yards and a touchdown in a massive AFC title game, and he could be positioned for another monster performance in the Super Bowl. The 49ers will likely key on Tyreek Hill, who should see a lot of Richard Sherman and a lot of bracket coverage, but Football Outsiders found that San Francisco was most vulnerable this year against No. 2 receivers.

K’Waun Williams is a strong cornerback in the slot who can probably handle Mecole Hardman and Hill with some help, but San Francisco’s weakest link at corner might be Emmanuel Moseley, who will see a lot of Watkins on Sunday evening.

4. It will actually be a relatively low-scoring game

The over/under of 55.5 is one of the highest in Super Bowl history, but the Chiefs defense is underrated, the 49ers defense is on fire, and both quarterbacks will likely approach their first Super Bowl a little conservatively. There’s a lot on the line for Chiefs head coach Andy Reid, who knows he has the best quarterback in the league when it comes to releasing in fewer than 2.5 seconds, and he’ll likely dial up a lot of safe, quick throws to security blankets.

That could mean we won’t see as many quick-strike scores from the Chiefs offense as they work the flats and rely heavily on star tight end Travis Kelce.

And that’s always San Francisco’s preferred approach. The 49ers are a run-first team that likes to control the ball and keep it moving on the ground.

So while both talented offenses should have plenty of success, watch for a series of long, sustained drives to eat away at the clock in what could actually be a game with fewer than 50 total points.