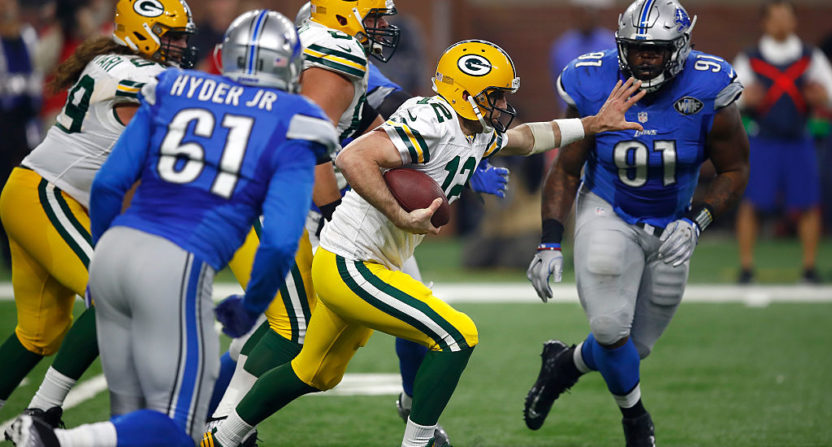 It definitely has been a while since a team from the NFC stood atop a podium at the end of a season to celebrate a Super Bowl win. After an NFC team won the league’s annual championship for three straight years from 2009 to 2011, teams from the conference are 1-4 in the last five Super Bowls.

Despite only sending one team to the postseason in each of the past two seasons, the last two teams to represent the NFC in the playoffs have been from the NFC South (Atlanta Falcons and Carolina Panthers). And despite how some of their teams may look heading into this year, the NFC West has actually sent more teams to the playoffs than any other division in the past five seasons.

So when the 2017 NFL season comes to an end, which NFC division will stand tall above the rest in the conference?

In what used to be one of the NFL’s most competitive divisions a few years ago, the NFC West has now come close to the form it had back in 2010 when the Seattle Seahawks won the division with a 7-9 record.

Despite some competition from the Arizona Cardinals recently, the Seahawks still remain the favorites to capture their fourth NFC West crown in the past five years. The Cardinals still have a shot at winning the division in 2017, but they will have to do it with an inexperienced defense and a quarterback in Carson Palmer whose career in the league is one more big hit from being over with.

Then there are the Los Angeles Rams and the San Francisco 49ers. Both are coming off of forgettable 2016 seasons and both are heading into 2017 with a new head coach. The future could bode well for each of these franchises, just not in 2017.

The last two teams to represent the NFC in the Super Bowl have come from the NFC South. However, these two teams (Falcons and Panthers) have been the on the losing end of the last two Super Bowls as well.

Even though Carolina has finished first in the NFC South in three of the past four years, it still seems like any of the four teams within the division could end up on top at the end of the upcoming season.

Atlanta is coming off an impressive 2016 campaign and will have to fight off the dreaded “Super Bowl Hangover.” The Panthers always seem to remain in contention each year and should get a boost on offense this season with the addition of rookie running back Christian McCaffrey.

In Tampa Bay, the Buccaneers have a roster full of young talent and have their best chance to get to the postseason in recent memory. If quarterback Drew Brees is able to reach into his bag of tricks one more time, then even the New Orleans Saints could possibly capture the NFC South this year too.

Despite the Green Bay Packers continuing to find ways to win this division year after year after year (five out of the last six seasons), the NFC North has still remained fiercely competitive recently. At least two teams from the division have earned a playoff berth in seven of the past eight seasons and the Packers have been participants in two of the last three NFC Championships.

Green Bay seems like the favorite for the division once again this year, however the gap seems to be closing between them and two other members of the NFC North.

The Detroit Lions definitely have the pieces in place to surprise a few people and win their first division title since 1993 and the Minnesota Vikings still have a number of players on their roster this season back from when they captured the NFC North in 2015.

As for the Chicago Bears, well they should just start scouting for the 2018 draft.

As annoying as may sometimes be, the NFC East continues to be one of the NFL’s most intriguing divisions each and every season.

It may have something to do with the fact that a different team has finished in first for the past 13 years. Not since the Philadelphia Eagles won the division in 2003 and 2004 has a team been able to capture the NFC East in back-to-back seasons.

This year, the Dallas Cowboys will be out to prove that last year’s success was no fluke. However, it could end up being quite difficult if they have to play the first six games of the season without running back Ezekiel Elliott due to a suspension from the league.

The Eagles, New York Giants, and Washington Redskins are all capable of taking over the top of the division in 2017 if Dallas ends up falling off of the NFC East mountaintop.

This division sent three teams to the postseason exactly 10 years ago. Could it happen again in 2017?