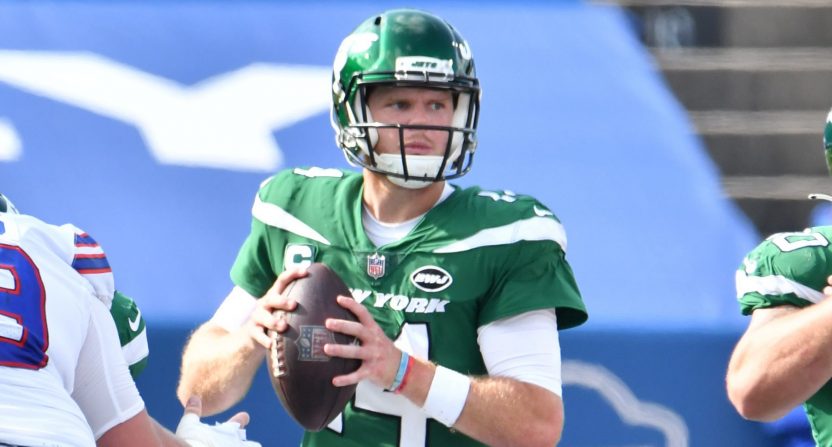 The 2020 NFL regular season might be only 6.3 percent complete, but teams are already swinging in and out of contention. Yeah, we love to overreact based on one week, but what else have we got to do? Let’s look at a quartet of teams that — for now — look to be toast for 2020.

I mean, we had a clue when C.J. Mosley opted out and then they traded Jamal Adams, but it’s not as though the Jets didn’t try to be good offensively. They revamped the offensive line and rejigged the receiving corps for third-year franchise quarterback Sam Darnold, who immediately went to the bathroom in the bed along with the rest of his team in an embarrassing Week 1 loss to the Buffalo Bills.

Darnold doesn’t look like he has it in him, and head coach Adam Gase never did. At this point, the Jets might be the leader in the race for presumed 2021 No. 1 overall pick Trevor Lawrence.

This is admittedly a bit of an overreaction, but how can we trust Philip Rivers at this point? The guy is a complete mess late in close games, and that’s been the case too long. Rivers is the unofficial world-record holder for fourth-quarter chokes, and he’s not about to change at the age of 38.

The 17-year veteran doesn’t have Super Bowl success in him, and the Colts look as though they still have work to do in order to get over what Andrew Luck’s sudden retirement did to them a year ago. They might still sneak into the playoffs in a bad division as the postseason expands, but let’s not pretend they have a shot at championship glory in 2020.

This was always likely a rebuilding year for the Panthers, and a Week 1 home loss to a mediocre Las Vegas Raiders team pretty much reaffirmed that. Maybe quarterback Teddy Bridgewater can have some offensive success with Christian McCaffrey and D.J. Moore at his disposal, but the extremely young defense will need plenty of time after receiving a makeover in the offseason.

In a very tough division in the stronger of the two conferences, the Panthers need another year or more.

As do the Dolphins, who were subject of plenty of hype in the offseason and are a hell of a lot better on paper after a ton of spending and draft capital usage. They won five of their final eight games last season, which might have led some to believe this could be a surprisingly strong season in a wide-open division.

But this team was outscored by a league-high 188 points last year. Despite the strong finish, they were a lot worse than their 5-11 record. They also went through all of those changes and then had almost no ability to bring it all together this summer, which will make it tougher for everyone to get acclimated. Realistically, it’s all about 2021 and beyond in Miami.