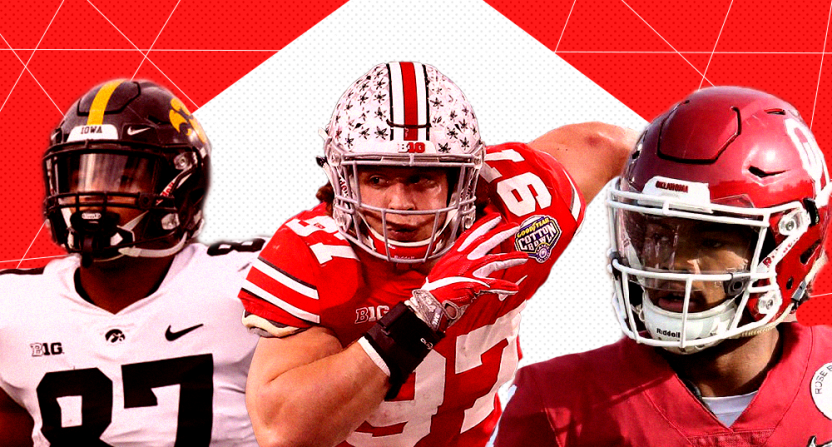 The NFL Draft kicks off on Thursday night, but if you think the hype doesn’t quite match what it has been in recent years for the event, you might not be alone.

Here are four reasons for the lack of 2019 NFL Draft hype:

1) A lack of top quarterbacks

If Oklahoma quarterback Kyler Murray hadn’t declared for the draft and chosen baseball over football, the hype for this year’s draft may be non-existent. In many ways, he’s saved the dramatic element for the draft by throwing his name into the mix. But there are indeed questions about how well Murray’s play will translate to the next level, perhaps dampening the enthusiasm surrounding his selection. And frankly, his interview skills haven’t exactly galvanized the masses either.

Murray may be the No. 1 overall pick to the Arizona Cardinals, but after his name is called, there’s no telling who or when the next quarterback will be selected. Ohio State record-setter Dwayne Haskins should be one of the top picks in the draft, but for some unknown (and absurd) reason he appears to be sliding down most draft boards in the days leading up to the draft. It doesn’t make any sense- Haskins has seemingly every tool to succeed at the next level and was amazing for the Buckeyes in his lone season as a starter. But instead of investing in a hometown Jersey guy as the future face of the franchise, the Giants seem content to invest their future in 38-year-old Eli Manning. Feel the excitement!

After Murray and Haskins, there are no sure things. Mizzou’s Drew Lock and Duke’s Daniel Jones weren’t exactly big names in college and it’s hard to imagine a fanbase making Super Bowl plans if their teams picked them up on Thursday night.

2) A lack of top storylines

On paper, this year’s draft should actually have a ton of intrigue and drama because we actually don’t know which direction the Arizona Cardinals will go with the top pick. Will they follow through on bringing together new coach Kliff Kingsbury with Kyler Murray or will they play it safe and take Ohio State DE Nick Bosa. A Murray pick could shake things up even further with a potential trade of former first-rounder Josh Rosen, opening up even more possibilities.

So why the lack of buzz? Maybe it’s the fact that the Cardinals aren’t exactly a flagship franchise of the NFL. Yes, future Hall of Famer Larry Fitzgerald is still there and playing at a high level, but their Super Bowl appearance was a decade ago. Furthermore, the Cards haven’t bottomed out like the Cleveland Browns (they’ve actually won 18 games over the last 3 seasons), so there’s not really a compelling turnaround story either. It just seems like another franchise floating along on the NFL’s bell curve of parity and mediocrity.

Go beyond the Cardinals and you’ll find similar stories. Pretty much everyone but the Cards and Giants either have a top QB pick already on their roster, or recently acquired a new starter. Therefore, it’s unlikely that we’ll see many franchise-altering decisions made on Thursday night unless something really unexpected happens.

We all know the draft is all about potentially landing a franchise quarterback, but it also helps to have well-known skill position players to help carry interest in the first round. After all, running backs and wide receivers are the most popular players after quarterbacks and can bring more excitement and highlight potential than Mel Kiper breaking down the hand technique of a defensive lineman.

Let’s be honest, there are only so many mock drafts you can read before the actual draft itself before the life is sucked out of you and you turn into a white walker. Even as an avid NFL Draft lover who has religiously watched the event for years, I just want it to be over with at this point on the calendar. If anything, the draft process is just way too long for the average fan to hold interest for two and a half months after the season concludes.

If the NFL Draft happened in March and the draft season were compressed, it would go a long way in keeping fans’ interest levels high. Perhaps the NFL would consider switching the draft and free agency on the calendar. It might also make sense for planning purposes for franchises to go into free agency after the draft so they can address long-term needs before short-term ones.

Think about it this way- the NFL Scouting Combine happened all the way back at the beginning of March. In a world where news happens so quickly each and every day, that feels like an eternity ago. Since the combine happened- we’ve had an entire NCAA Tournament, Tiger Woods won the Masters, the Presidents Cup winners got swept in the first round of the Stanley Cup Playoffs, MLB celebrated Opening Day, LeBron James missed the postseason, and the AAF folded.

That’s a lot of fascinating stories, events, and moments that have taken our attention away from the build-up to the draft, and rightly so. It could be worse, though. At least, the draft isn’t in May anymore.