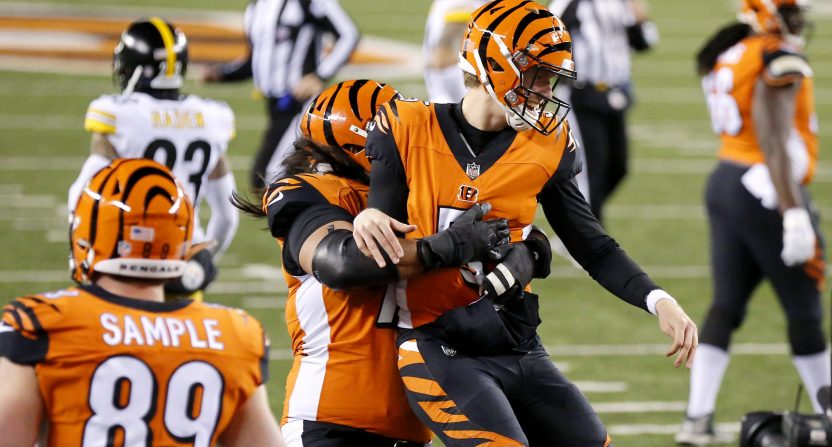 One day after the New York Jets got their first win of the season in a stunning upset over the Los Angeles Rams, the Cincinnati Bengals knocked off the Pittsburgh Steelers 27-17 as 14.5-point underdogs on Monday Night Football. Here are our main takeaways from a Bengals win that nobody saw coming:

A brutal performance by Ben Roethlisberger

This was as bad as Roethlisberger has ever looked, probably at any level of football. Roethlisberger was particularly terrible in the first half, with one interception (luckily only that), and numerous throws that were either horribly inaccurate or got his receivers destroyed.

WHOA. What a hit. JuJu got destroyed. #MNF pic.twitter.com/tD1llCfw0W

Ben Roethlisberger keeps throwing hospital balls. Eric Ebron down in pain after this one. #MNF pic.twitter.com/4Nmaf05G7N

Ben Roethlisberger's completely dreadful first half capped off by this brutal interception. pic.twitter.com/0epk330TvJ

This one is a doozy from @ESPNStatsInfo:

This was the Steelers worst 1st half of offense with Ben Roethlisberger as starting QB. In addition to setting new lows in pass yards (7), YPP (1.4), Steelers matched their fewest 1st downs & most TO in a first half with Ben as starter.

Roethlisberger was a bit better — still not very sharp — in the second half, but that was after the Steelers had already fallen behind 17-0. He finished the night with 20-of-38 passes completed for 170 yards (4.5 AVG), one touchdown, one interception, and a 62.4 passer rating.

And those numbers make the performance look better than it actually was. On passes of 10-plus yards, Roethlisberger was 1-of-13.

Roethlisberger has overall been decent this season (he entered the game with 29 touchdown passes, nine interceptions, and a 94.9 passer rating), but it’s always concerning when a 38-year-old athlete looks this terrible in a game, especially as we get deep into the season.

The Bengals won with their third-string QB

Even with Roethlisberger’s performance, and even with several injuries to the defense, the Steelers should’ve been able to do better than they did against third-string quarterback Ryan Finley and the Cincinnati offense. Now, Finley — who entered the game with a 54.3 passer rating on 106 career pass attempts — only threw 13 passes, with one of them being for a touchdown.

But he had 10 carries for 47 yards, including what would serve as a dagger 23-yard touchdown run in the fourth quarter.

Ryan Finley with a 23-yard touchdown run! The Bengals lead the Steelers 24-10 in the 4th quarter. #MNF pic.twitter.com/Y0u87sc5Qt

As a team, the Bengals ran 41 times for 152 yards and two touchdowns. Hey, that’s only a 3.7 average, but that’s with high volume and with Finley being a very minimal threat in the passing game. The Bengals were able to consistently move the ball enough on the ground and get touchdowns in the red zone.

The Ryan Finley-led Bengals are taking it to the Steelers so far. 10-0 Cincinnati after this Gio Bernard TD. #MNF pic.twitter.com/GPkEaTsMYF

Losing to a Bengals team that had Joe Burrow and Joe Mixon on offense would’ve been at least *sort of* understandable. But to this particular group of Bengals players? Well that’s just…

A completely embarrassing loss for the Steelers

After starting 11-0, the Steelers have lost three straight games, and the latest one will really sound the alarms. Again, there are a lot of injuries to key players right now, but there’s simply no excuse for the Steelers to be losing to a Finley-led Bengals squad.

This Bengals team probably has the least (healthy) roster talent of any team in the NFL right now, and they just beat the Steelers by double-digits. A Steelers team that’s trying to win a division title (they now only have a one-game lead over the Cleveland Browns, and these teams play each other in Week 17) and should’ve been even more motivated after two straight losses entering Monday. To look as awful as the Steelers did in this game, particularly in the first half, should be quite concerning to Mike Tomlin and company.

So, what are the Steelers?

Not the team that was 11-0; that’s for damn sure. ESPN analyst and former Steelers safety Ryan Clark doesn’t even think Pittsburgh can beat *anybody* in the playoffs.

Who can the Pittsburgh Steelers beat in the playoffs?

More from Ryan Clark on the Steelers:

“As a Pittsburgh Steelers fan, as an alum, I am sad- because I don’t see them winning a game in the playoffs.” pic.twitter.com/rL4kVuLHS1

Okay, so that’s probably a bit extreme, but the Steelers of the last three weeks definitely wouldn’t beat anybody. And few would pick them to beat any of the Kansas City Chiefs, Buffalo Bills, Tennessee Titans, Cleveland Browns, Indianapolis Colts, Miami Dolphins, or Baltimore Ravens (currently out of the playoffs) at the moment.

But there’s no reason for the Steelers to be *this* bad… unless the Roethlisberger of Monday night is here to stay. Getting a bit healthier on defense and getting James Conner back on offense would certainly upgrade the roster, at least. We’ll have a much better idea about what this team is over the next two weeks, with prove-it games against contenders in the Colts and Browns. If the Steelers aren’t looking much better in those games, yeah- it’s hard to imagine them winning one in January.

In reality, the 2020 Steelers are probably more like a 9-7, 10-6 kind of football team- a solid team, but one that would need *a lot* to go right to go very far in the playoffs. They’re not as bad as they were on Monday night, but they’re nowhere near as good as the 11-0 record suggested either.