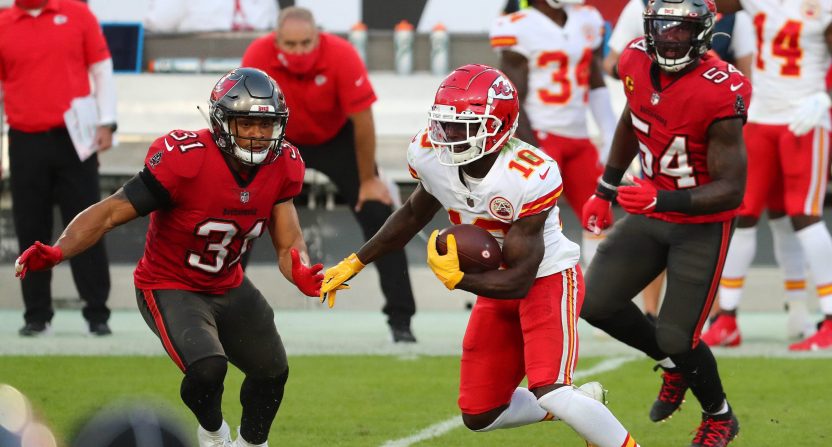 Patrick Mahomes and the Kansas City Chiefs took down Tom Brady and the Tampa Bay Buccaneers 27-24 on Sunday at Raymond James Stadium. Here are our takeaways from Tampa Bay’s victory:

But Tampa Bay finally made a few stops on defense, and Brady connected with wide receiver/monster Mike Evans for touchdowns on consecutive fourth-quarter drives to get the Bucs within three points.

Tom Brady and Mike Evans connect for a big TD on 4th-and-3 to keep the Bucs hanging around vs the Chiefs. pic.twitter.com/jMP3o30FLw

Tom Brady to Mike Evans again. All of a sudden it's a 3-point game. pic.twitter.com/TF1nyvMFtf

However, the Chiefs finally put the game away when Mahomes and Tyreek Hill connected for a first down on 3rd-and-7 with just over a minute remaining.

Patrick Mahomes to Tyreek Hill is a fitting way to close out this game.

That was certainly a fitting way to secure the victory…

If Mahomes and Hill *really* wanted to, they could’ve probably broken some records in this game. Through the first quarter, Hill had seven receptions for 203 yards and two touchdowns.

Hill added a third touchdown later on a laser from Mahomes.

Hill finished with 13 receptions for 269 yards (20.7 AVG) and three touchdowns. Mahomes completed 37-of-49 passes for five touchdowns, zero interceptions, and with a 124.7 passer rating. Quite good.

The Bucs’ struggles vs good teams

Tampa Bay looked awful in a Monday Night Football loss to the Los Angeles Rams (who lost at home to the San Francisco 49ers on Sunday), which dropped the Bucs’ primetime record to 1-3 (and their only primetime win was squeaking by the New York Giants).

Sunday’s game wasn’t a primetime one, but it was *the* game on Sunday and against a great team. Tampa Bay’s comeback effort was admirable, but at the end of the day, it’s another loss. And with the loss, the Bucs are now 2-5 against against teams that currently have records of .500 or better (at least going into the Chicago Bears’ game against the Green Bay Packers).

Hey, overall they’re a solid 7-5, and and their final four games are against teams with sub-.500 records. They should still get into the playoffs, perhaps comfortably. But we’ve seen little reason to be optimistic about their chances to run the table in January.

The Chiefs seem to be on another level than everybody else

Or at least when they don’t play the Raiders (who then got blown out 43-6 by the Atlanta Falcons). Yes, the Pittsburgh Steelers are 10-0 and in the driver’s seat for the AFC’s No. 1 seed. The 9-2 New Orleans Saints are playing great football, and while battling key injuries this season.

But the defending champion Chiefs (10-1) look like they’re in their own league. Like it’s been for NBA teams against Michael Jordan and LeBron James over the years, there’s really no stopping Mahomes. Maybe you can slow him down a bit and prevent him from putting together absurd numbers, but he’s still going to make big plays. He’s the best player in the sport, at the most important position in sports. And he has a tremendous supporting cast with weapons like Hill, Travis Kelce, and Clyde Edwards-Helaire on offense, to go with a defense that gets enough done.

Even in their off games, this team is still really, really good. Regardless of what records and seeding say a month from now, this is the clear Super Bowl favorite (as long as Mahomes stays healthy, of course).