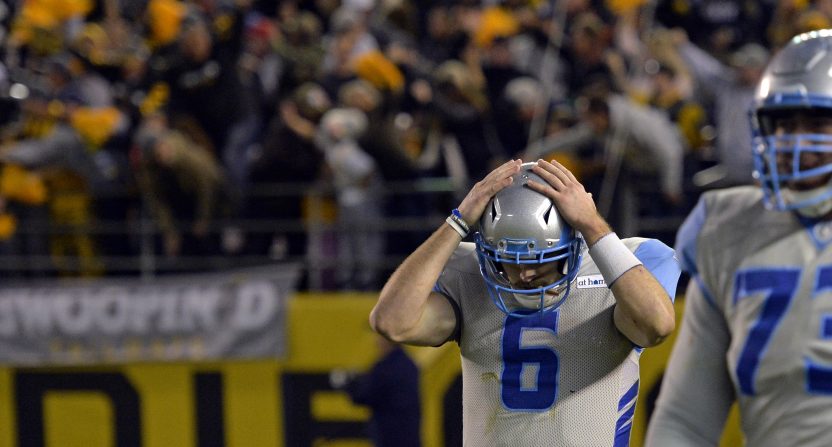 In news that was unsurprising in its finality yet very surprising in its swiftness, the Alliance of American Football announced Tuesday that it would be suspending all football operations immediately. AAF majority owner Tom Dundon, who bought into the league after Week 1 following reports that the AAF was in financial trouble, had teased the possibility of discontinuing the league last week over an inability to get the NFL and NFLPA to agree to loan them contracted players. Given that the NFL certainly doesn’t need the AAF, there was little reason for the league to jump to their demands. And so, in spite of the wishes of league co-founders Charlie Ebersol and Bill Polian, Dundon closed down the league, doing so with such speed and confusion that players were caught completely off-guard and leaving them to pay for their own flights out of town.

This mess is only starting to untangle itself. But even if the AAF didn’t make it to the end of year one, in spite of reasonably good ratings, there was still enough time for lessons to be imparted for future pro leagues (most notably the XFL, who will try to avoid this same fate for a second time next year). Whether or not those lessons are headed remains a different story altogether.

The TV Audience is There, But Is the Local Audience?

The AAF was able to prove that there is enough TV demand for spring football. The league’s opening weekend ratings were solid and actually went up over time, leading to TNT and CBS both adding more games. So that wasn’t the problem.

But what about the actual butts in the seats? Did they warrant all of the expenditures that go into putting on pro football games in 60,000-seat stadiums? Some of the numbers sound reasonable but of course, we all know the teams inflate their attendance numbers all the time. There’s a big difference between tickets sold and actual attendees. Even with inflated numbers, they’re not that great overall. Most games were garnered attendance figures in the 10-20K range, far below stadium capacities. Salt Lake City was having especially egregious attendance problems, averaging 9,067 fans per game and drawing 8,150 in Week 6.

It’s hard to believe that the financial losses that came with playing in mostly empty arenas didn’t add up quickly. In the future, leagues might be wise to forgo the ego boost that comes with playing in massive stadiums and instead shoot for reasonable complexes where they don’t have to foot crazy bills until the fans start showing up.

How High Was Their Overhead?

You hate to point out that the players were probably being overpaid (three-year, $250,000 contracts, paying $75,000 for Year One) because a lot of these guys are deserving of that money and are just trying to make a living doing what they love. However, from a business standpoint, that is a lot of overhead to tie up in players right off the bat, especially if you’re not meeting your revenue projections like the AAF clearly wasn’t. Unfortunately, that’s probably something that future leagues are going to key in on as a takeaway. To say nothing of what they must have paid for high-profile head coaches who, other than Steve Spurrier, probably didn’t do much to impact the bottom line.

We should all want the players to be compensated fairly, but startups often demand smaller salaries for their employees at the start with the promise of potential riches down the road. Perhaps that’s what leagues like the AAF need to try to keep initial costs low.

Do you know that saying about firewood? That, if you’re out camping and trying to figure out how much wood to collect for a fire, figure out what you think it a reasonable amount and then triple that. Far be it from us to tell the smart people in charge of this football league that they didn’t really crunch the numbers well, but, they clearly presumed they had way more funding lined up than they actually had. That or they were presuming revenue at a much higher rate than they actually saw. Either way, it doesn’t feel like the league used a sound financial strategy to chart their course.

There are rumors that Dundon actually only invested in the league so that he could get control of certain technologies and then profit from their usage elsewhere (He owns the NHL’s Carolina Hurricanes and a majority stake inTopGolf, after all). That may or may not be true, or it may or may not have been the whole story, but regardless, the league shouldn’t have put itself in a position where it had no choice but to rely on one billionaire to step in and save them. Maybe they jumped the gun to beat the XFL, maybe they thought they had something figured out that they didn’t, but whatever happened, it’s obvious the AAF focused more on their uniform color schemes than their long-term financial strategy.

Just Admit What You Are Up Front

As I said back when the league was about to kick off, the end goal for the AAF was always to become the NFL’s minor league.  That was the best they could pretty much hope for, given the NFL’s absolute dominance on the market and the many, many barriers in the league’s way. So why did they waste any time trying to establish themselves as a rival of sorts? Why not just come out and negotiate with the NFL right off the bat? It might not have meant as much money, and it wouldn’t have been as cool of a success story, but it would have likely given the AAF the long-term safety net it needed.

The XFL would do wise to consider this as well. Much as Vince McMahon wants to position it as an alternative to the big boys, the first rodeo should have convinced them that appeasing the NFL is the much smarter play. Not to mention it also sounds like that’s what Dundon was trying to do when he bought a controlling interest in the league. You might not think he’s a very nice person, but that certainly sounds like the smarter strategy than whatever got the AAF here. Which is nowhere.

Starting a professional sports league in really, really hard and the odds are stacked against you. Future leagues would be wise to heed the lessons the AAF just gave them, rather than trying to convince themselves they would have done it better.