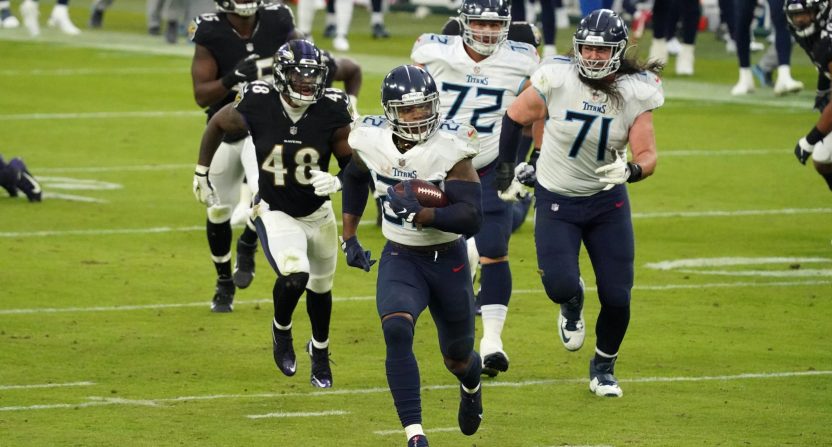 The Tennessee Titans took down the Baltimore Ravens 30-24 in a comeback victory that ended in walk-off fashion in overtime. Here are our main takeaways from the Titans’ win:

In January, Titans running back Derrick Henry ran for 195 to lead Tennessee to a shocking 28-12 playoff victory over the Ravens in Baltimore. On Sunday, the Ravens prevented Henry from going off… until the game’s final drive.

With just over 5 minutes remaining in overtime, Henry ran for an incredible 29-yard touchdown (his longest run of the day) to give the Titans a 30-24 walk-off victory.

PUT THE CROWN ON HIM 👑

Real one , always showing love to EVERYONE ✊🏾👑 https://t.co/AtFJst85GU

Tennessee finished on a 17-3 run

Baltimore appeared to be in very good shape, leading 21-10 in the second half and taking a 21-13 lead into the fourth quarter. They also held the Titans to a field goal — making it a 21-16 game — after getting a stop at the four-yard line with under 12 minutes remaining in regulation.

But Tennessee then forced a punt, and followed that up with this ridiculously, beastly, Henry-esque effort by wide receiver A.J. Brown for a 14-yard touchdown on a Ryan Tannehill pass with 2:13 remaining:

The Titans would get a two-point conversion to take a 24-21 lead, and the Ravens finally got back on the board with a Justin Tucker field goal to send the game to overtime. And in overtime, the Titans did all of the scoring with the Henry touchdown.

But the Ravens have to be kicking themselves; their rushing attack and defense are supposed to be putting games away when having double-digits leads. And they especially have to be frustrated to lose this rematch of a game they spent all offseason thinking about.

The Titans really needed this one

After starting 5-0, the Titans entered Sunday with losses in three of four games- including a 17-point loss last week to the Pittsburgh Steelers, and an 11-point loss in Week 8 vs the lowly Cincinnati Bengals. Along with the significance in the standings (the Titans are now 7-3 and have a half-game lead over the Indianapolis Colts), this win was big for Tennessee just to get their swagger back.

But the Titans can’t celebrate for too long- they follow this up with a crucial game against the Indianapolis Colts next week (and the Colts would have the tiebreaker with a victory, after winning the first matchup). That game will go a long way to deciding the AFC South division title.

Ravens have lost 3 of 4, now face the Steelers

And now the Ravens are in the same position the Titans just were. Baltimore got off to a 5-1 start, but they’ve lost three of the last four games (with a bad loss to the Patriots last week)- and have just not looked like the same Ravens team we saw steamrolling the league last (regular) season.

It only gets more difficult in Week 12- the Ravens head to Pittsburgh to face the Steelers for a Thanksgiving night game. The Steelers are 10-0 and beat the Ravens 28-24 in Baltimore in Week 8. Pittsburgh could actually wrap up with the AFC North crown with a win (due to the head-to-head tiebreaker). Edit: As pointed out by a commenter, the Steelers can’t officially clinch the AFC North title on Thursday night due to the Cleveland Browns still hanging around at 7-3 (Pittsburgh does hold the first half of the head-to-head tiebreaker over the Browns, and they play again in Week 17). But the Ravens would at least be eliminated from division title contention if the Steelers win.