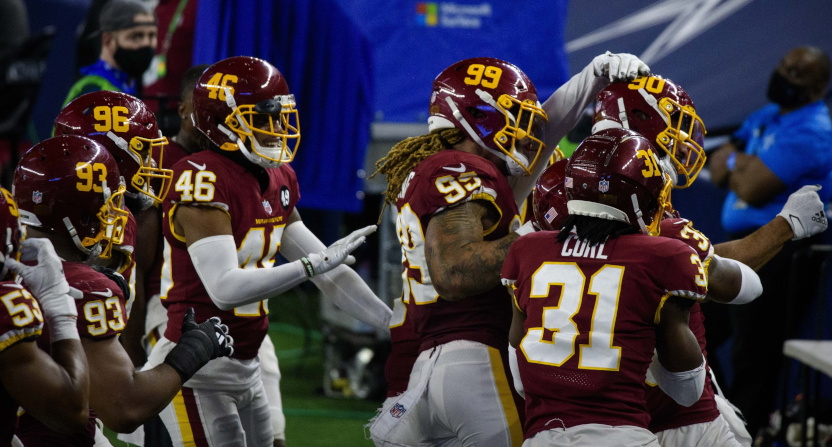 The Washington Football Team beat the Dallas Cowboys 41-16 Thursday in a battle for NFC Least supremacy. Both teams entered the day 3-7, but Washington’s win put them at 4-7, atop the division (ahead of the 3-6-1 Philadelphia Eagles, the 3-7 New York Giants, and 3-8 Dallas). Here are four things that stood out in that game:

1. Antonio Gibson is devastating to Dallas: Gibson, a third-round pick in the 2020 NFL draft (66th overall), has been a valuable piece for Washington this year on a variety of fronts. But he’s been particularly effective against the Cowboys. His only game with 100-plus rushing yards heading into Thursday’s contest was a 25-3 home win over Dallas on November 8, where he carried the ball 20 times for 128 yards and a touchdown. And on Thursday, he rushed 20 times for 115 yards and three touchdowns, making him the first rookie to score three touchdowns in a Thanksgiving game since Randy Moss in 1998. Here are those touchdowns:

That’s a great performance from Gibson, and one that might see him featured more going forward.

2. Alex Smith did enough: The story of Alex Smith’s multi-year recovery from a horrific leg injury is remarkable in its own right, but it’s fascinating to see how that’s led to Smith starting for Washington this year thanks to the team benching Dwayne Haskins and then seeing Kyle Allen get hurt. And while Smith’s numbers haven’t been jaw-dropping, they’ve sometimes been enough for a win. That was certainly the case Thursday; he threw for just 149 yards with one touchdown and one interception, but completed 19 of 26 passes (73.1 percent). That may not be enough yardage to win every week, or against teams not in the NFC Least, but with the rushing performance from Gibson and the showing from the defense (and the special teams, who sniffed out a fourth-quarter fake punt), it worked Thursday.

3. What is Ezekiel Elliott offering the Cowboys right now? Elliott signed a six-year, $90 million contract extension with Dallas last year. Heading into this game, he had 675 rushing yards this year on 171 attempts, a career-low average of 3.9 yards per carry. And in this one, he rushed 10 times for just 32 yards. Yes, that’s not all his fault; the Cowboys have offensive line issues (and lost both starting tackles during the game Thursday), and Andy Dalton (playing because of Dak Prescott’s season-ending injury) isn’t the greatest threat at quarterback. But Elliott sure doesn’t look all that impressive this year.

4. The Cowboys took a gamble that didn’t work out at all: One of the biggest turning points here came in the fourth quarter, with Washington up 20-16. With 12:20 left, Dallas faced a fourth-and-10 deep in their own territory, and they opted to go for a fake punt. On some levels, that’s maybe justifiable; there’s a chance it takes the opponent off guard. But the run they called left receiver Cedrick Wilson way behind the line of scrimmage when he got the ball, and Washington wasn’t fooled. Wilson wound up losing a yard on the play, Washington took over at the Dallas 23, and Gibson promptly ran in for a touchdown on the next play. If the Cowboys are going to get tricky, they’ll need to do a better job of it.