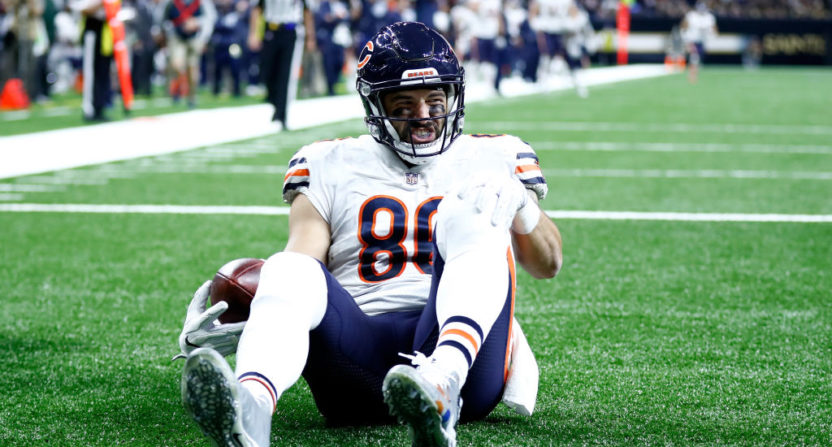 In one of the most perplexing NFL replay reversals in recent memory, Bears tight end Zach Miller lost a touchdown after having been deemed to have lost control of the ball. Never mind that his knee exploded to such a degree that he suffered major arterial damage and, for a time, was in jeopardy of amputation.

Here’s the play again, if you can stomach it:

Last week, the NFL doubled down on their original decision, trotting out Alberto Riveron in a bad sweater to point at a television and tell us it showed indisputable evidence, when it very clearly showed anything but:

Note to the rest of the NFL: The league’s senior VP of officiating believes this is indisputable evidence to overturn a call. pic.twitter.com/P49rjd5ehx

Now, FOX analyst and former NFL VP of officiating Mike Pereira has weighed in, joining Pardon My Take to talk about the unfortunate trend of aggressive replay reversals.

Pereira joined the “Pardon My Take” podcast released Monday morning and admitted some officials around the NFL know the Miller TD call was a mistake, but won’t say that publicly.

PFT Commenter and Big Cat asked Pereira if the NFL has officially apologized for the Miller TD reversal.

“No, they’ve done the opposite,” Pereira said. “They have officially tried to sell the fact that they were correct with their ruling on the field, which I’m sorry to say — I don’t want to call it laughable, but close to laughable.

“I get the fact that they want to try to defend what they’re going to do, but there’s no part of the Jet play against New England that was clear and obvious to overturn. It’s a dangerous trend that we have seen.

“At least I’m happy to say this Sunday’s games, they didn’t pull any of those. They stayed with the calls that were made on the field. But they’re trying to really try to justify their mistake when we’re hearing even internally from some people in New York that they do agree it shouldn’t have been reversed.”

That the NFL is doubling down on calls that are so obviously incorrect isn’t necessarily a surprise, given what we know about how the league does their business (presumably the league offices blare “Yakety Sax” 24/7 throughout the building), but it’s not reassuring. The NFL should in theory have an incentive to be as transparent about rules and decisions as possible. Any time someone can point to a league decision or a moment from a game and at least somewhat rightfully question the integrity of the sport, it’s a problem.

The entire Deflategate (and Spygate) scandals stemmed from that supposed commitment to legitimate competition. That was the public line, anyway. But as we see with these ever-shadier replay calls and a bigger gray area for catches and sometimes an inability to even spot the ball correctly, the NFL doesn’t really care about integrity of competition. Other owners were pissed at the Patriots, threw a fit, and the league office acted.

There’s no such backlash as of yet here, because it’s just one on-field play in a regular season game. Ergo, the league doubles down on fake news (hi Alberto!) to try and move the narrative forward at the expense of fans (many of whom have financial stake in the outcome of games and even individual plays) trusting anything the league offers in the future.