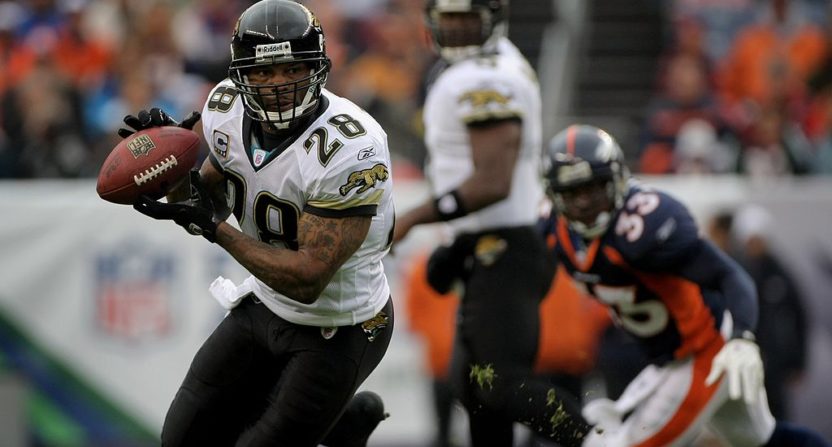 Fred Taylor is one of the best running backs in recent NFL history, and certainly one of the most underappreciated running backs in NFL history. It didn’t help that he played most of his career in Jacksonville, one of the NFL’s (sadly) most anonymous markets, and that he never made it to a Super Bowl in his career, but he’s still 17th on the all-time rushing yards list and would be even higher if it weren’t for his injury troubles that derailed some of his prime years.

He wasn’t nominated for the Hall in either 2016 or 2017, and he’s not pleased about it, as he shared with the world on Twitter.

I earned respect on the field. Numbers better than majority of RBs in history. Still don't understand why the writers don't respect it ?

Don't tell me anything about eras. AFC had top defenses in my division alone (Ravens, Steelers, Titans) to name a few. That's twice a year

Taylor only made one Pro Bowl in his career thanks in large part to injuries.

Or maybe because of another reason…

Because you played for Jacksonville dude.
If you were a dirty Steeler or Cowboy you'd be in.
But you'll always be a Legend in Duval #DTWD

I think you're on to something https://t.co/EgQUmkfTSH

While his numbers aren’t mind-blowing, they were incredibly consistent through time despite major injury problems. He had seven 1,000 yard rushing seasons and only played a full 16 game season twice in his career. Those numbers, relative to the injury problems, are incredibly impressive.

Personally, I am biased as a die-hard Jaguars fan. But Taylor’s explosiveness, shiftiness, and speed were unlike what most running backs had at the time and who knows what he could have done in his career if not for injuries early in his career. His numbers on their own might not be entirely Hall of Fame worthy, but they are worthy of some consideration at least from the folks in Canton.

And both he and Jaguars fans are right in saying that playing in Jacksonville has hurt his chances of getting the recognition he deserves. Taylor had many of his best seasons when the Jaguars weren’t good, but he was at his best when Jacksonville was, especially in 2007 when he and Maurice Jones-Drew combined to become a lethal duo for the best team in recent team history (though that’s not saying much).

Taylor is also notably outspoken about other issues in football, namely league doctors, but it remains to be seen if his Twitter campaigning will draw him support from the media who votes for the Hall of Fame. He has plenty of supporters in Jacksonville, including me, if that makes any difference.