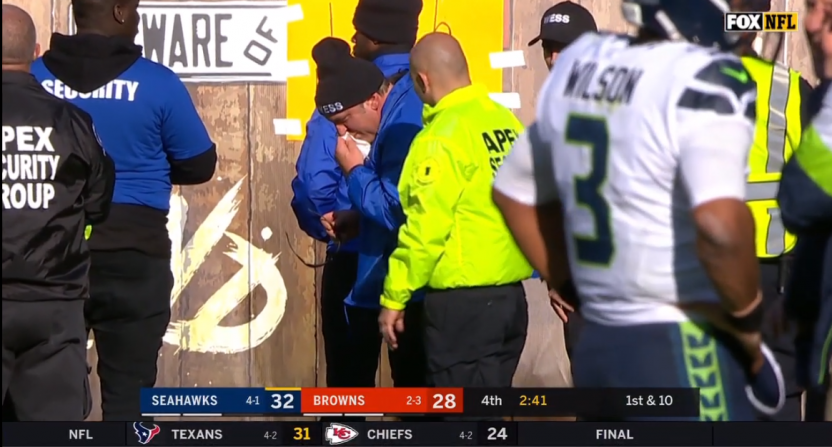 Cleveland blew a 20-6 lead today at home to the Seahawks, and while fans were understandably displeased with that turn of events, it certainly didn’t excuse the actions of one fan in particular.

That fan apparently threw something towards the field that nailed a stadium security team member in the face. There was a slight delay in the aftermath, as cameras caught the security member picking up his sunglasses and treating what looked like a bloody nose, or a cut on his nose. FOX then showed different security members apparently ejecting the offending fan, who looks exactly like you’re expecting him to.

The game resumed and finished shortly after.

It’s hard to know, but it’s possible the injury could have occurred when Cleveland fans threw a barrage of things Seattle defenders who were celebrating an interception in that end zone a few minutes prior to the delay.

You can see a few objects fly through the frame here.

That also means that whoever security was ejecting may not have thrown the object that hit the security member in the face; rather, they could have been clearing out a whole group of fans who had thrown things. Obviously being a Browns fan isn’t a fun way to exist, but hurling objects at players or the field in general is a reprehensible way to behave.