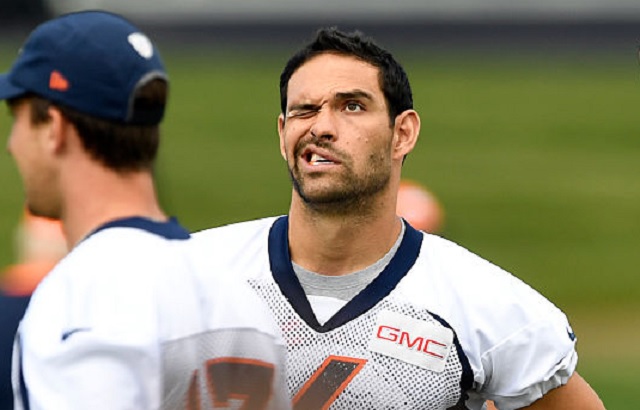 It’s been a really good couple of weeks for people whose last names end in Sanchez, with the notable exception of NFL QB Mark.

After Peyton Manning’s retirement from the Denver Broncos on March 7, John Elway traded for Sanchez four days later and said he’d compete for the starting role.

Acquired QB Mark Sanchez for a conditional ’17 pick. He brings veteran leadership & will compete. This is the 1st step in our process.

Even after taking Memphis’s Paxton Lynch in the first round, it was widely assumed that Sanchez would be Denver’s opening night starter. ESPN NFL analyst Josina Anderson even said she’d cut her hair off if the former Jet, Eagle and USC Trojan wasn’t the starter for week one.

Josina Anderson says she will cut her hair off if Mark Sanchez doesn’t start Week 1. 👀😬

When it was announced this week that 24-year-old Trevor Siemian, with all of one career NFL snap, won the starting job, ESPNers were quick to remind Anderson of her previous commitment.

Mark Sanchez is not Denver’s Week 1 starting QB.@JosinaAnderson is cutting off her hair as a result. Sneak preview: https://t.co/cBNdc75pEy — Adam Schefter (@AdamSchefter) August 29, 2016

Whether Sanchez is cut or traded, it’s likely that he won’t even be on the Broncos roster when they begin the regular season.

But, while it hasn’t been a very good week for Mark, it’s been a historically great week inside and outside the world of sports for people named Sanchez.

To start with, Gary Sanchez, 23-year-old rookie Yankee catcher, is taking baseball by storm. In his first full month as a Major Leaguer, Sanchez took home consecutive American League Player of the Week awards, becoming the first AL rookie to ever accomplish that feat. In fact, no other AL player has won consecutive POTW awards since Albert Belle in 1998. The Yankees were 5.5 games out of a wild card spot a month ago, after trading Carlos Beltran, Andrew Miller, and Aroldis Chapman. That was a sale many thought would end their playoff hopes. Now, thanks in large part to Gary Sanchez, the Yankees sit just 3.5 games out of the second wild card spot. Not a bad couple of weeks for Gary.

Arsenal midfielder Alexis Sanchez had a really strong week on the pitch last Saturday against Watford. In a 3-1 road victory, the 27-year-old Chilean scored in the 40th minute and assisted on a Mesut Özil goal six minutes later to close the match’s first half.

It was an important win for the Gunners, their first of the season after an opening loss to Liverpool, and a draw a week later against defending Premier League champion Leicester City.

But the success of the Sanchez clan doesn’t stop there:

It seems like the only unsuccessful Sanchez over the last couple of weeks has been poor Mark. He may have a chance to redeem himself if he gets traded to Dallas or Minnesota, both teams having just lost their starting quarterbacks to injury.

But for now, Sanchez is currently bringing down the family name.