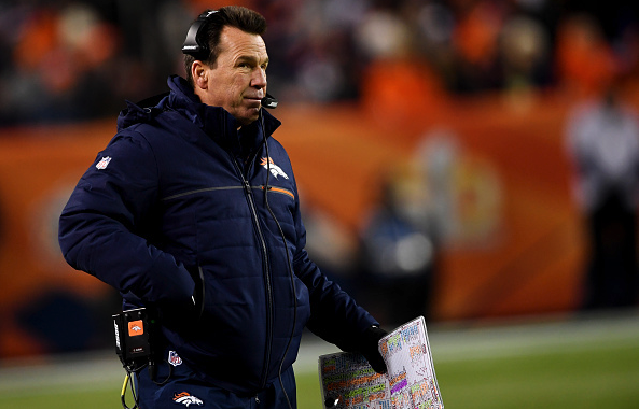 The list of open NFL coaching jobs keeps growing, and the latest opening comes from Gary Kubiak retiring as head coach of the Denver Broncos.

ESPN’s Adam Schefter reported early Sunday morning that the 55-year-old Kubiak was likely to resign, thanks largely to his family’s concerns about his health (he was hospitalized with a complex migraine earlier this season and missed the Broncos’ Week Six game against San Diego, plus experienced a mini-stroke in 2013 while coaching Houston), leading to our discussion of who might take his place. NFL Network’s Ian Rapoport confirmed Sunday night that Kubiak told his team he was leaving following their 24-6 afternoon win over the Oakland Raiders:

Nicki Jhabvala of The Denver Post had some interesting follow-up comments from Kubiak:

Kubiak said the conversation in the locker room was tough. Very proud of his team. He doesn't need to say it out right to make it clear …

Gary Kubiak: "In all honesty I've struggled this year, but I'll talk about that tomorrow."

According to Jhabvala, Kubiak’s message to the team was an emotional one:

Shane Ray said Kubiak told them after game and thins got really emotional.

Shane Ray: "Anytime you see your head coach fighting tears you know how much it means to him."

Jordan Taylor: "Its a surprise but we knew he's been battling health issues all year and it's the best decision for him."

Jordan Taylor: "He was emotional when he was telling us. He's giving up a game he's been around for a long, long time."

If Kubiak’s concerned about further health issues, it makes some sense for him to leave. This opens up a very attractive coaching job, though; yes, the Broncos missed the playoffs this year, but they’re the defending Super Bowl champions, and the win over the Raiders improved them to 9-7. Some growing pains were expected this year with Peyton Manning’s retirement, and while the Broncos weren’t expected to fall back as far as they did, they still have a very good team. There are quarterback questions, with Trevor Siemian struggling at times and Paxton Lynch not getting many opportunities to play, but the team also looks relatively wise for not giving a ton of money to previous backup Brock Osweiler (who may have narrowly gotten 9-7 Houston to the playoffs, but generally hasn’t impressed). The Broncos have an excellent defense and some good offensive pieces, and they have a much better recent record than most teams making coaching changes.

There are plenty of other coaching jobs that are or will be open, of course. The 7-9 Buffalo Bills have already fired Rex Ryan, the 4-12 Los Angeles Rams have fired Jeff Fisher, the 3-13 Jacksonville Jaguars have fired Gus Bradley, and the 5-11 San Diego Chargers have fired Mike McCoy. Other potential firings could happen in San Francisco (2-14), Chicago (3-13) and more, and there are possibilities of 7-9 New Orleans Saints’ head coach Sean Payton going elsewhere (likely to LA) and 7-8-1 Arizona Cardinals’ head coach Bruce Arians (who’s also experienced medical issues this year) retiring. Still, the Broncos have a better record than all those teams, a recent Super Bowl pedigree, and a promising group of players. Their opening is going to be highly sought-after, and it will be interesting to see who winds up with it.