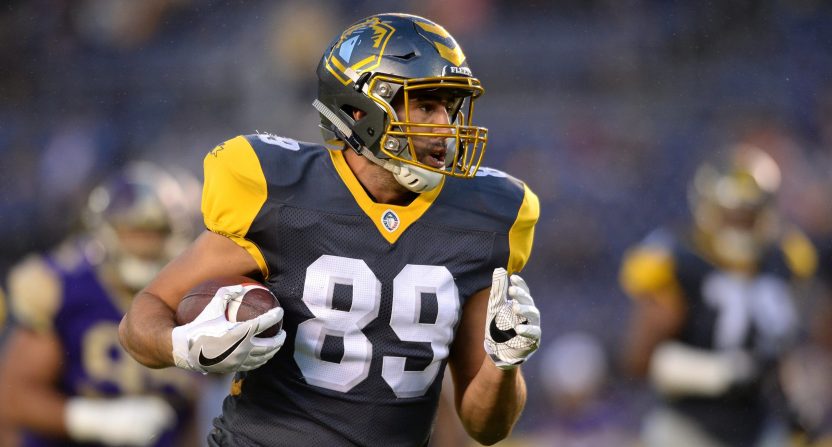 Gavin Escobar, who played tight end primarily with the Dallas Cowboys, passed away on Wednesday in a rock climbing accident in California.

CBS News in Los Angeles was one of several outlets to report on the tragic accident. Escobar was one of two people to pass away in the accident.

“A man and woman who died while attempting to climb a rock face in Idyllwild were identified on Thursday,” the report said. “Gavin Escobar, 31, and Chelsea Walsh, 33, were found at around 12:20 p.m. Wednesday afternoon after they died during an attempt to climb a rock face near Tahquitz Peak Fire Lookout near Humber park in the San Bernardino County Forest, according to Riverside County Sheriff’s Department.”

The Long Beach Fire Department, who Escobar had been working with since February, also announced Escobar’s passing.

Prior to being a Long Beach Firefighter, Gavin Escobar played professional football for the #NFL where he spent most of his time with the #DallasCowboys. Firefighter Escobar leaves behind his wife and two young children.#ActiveDutyDeath #YourLBFD @lbfirefighters

The NFL world sent its best wishes to Escobar’s young family upon hearing the tragic news.

Escobar became a firefighter after his NFL career

Prayers to his family! 🙏🏼 pic.twitter.com/Y8pPotHdta

Just heard the news about Gavin Escobar, I’ll never forget announcing his name in the 2014 NFL draft by the Cowboys. Too Soon RIP 🙏🙏

He remained with Dallas through 2013. Escobar then played with the Baltimore Ravens in 2017 and Miami Dolphins in 2018, finishing his professional football career with the AAF’s San Diego Fleet in 2019. Escobar also spent time with the Kansas City Chiefs and Cleveland Browns, but was released by both teams before the start of regular season. He finished his NFL career with 30 receptions for 333 yards and eight touchdowns.