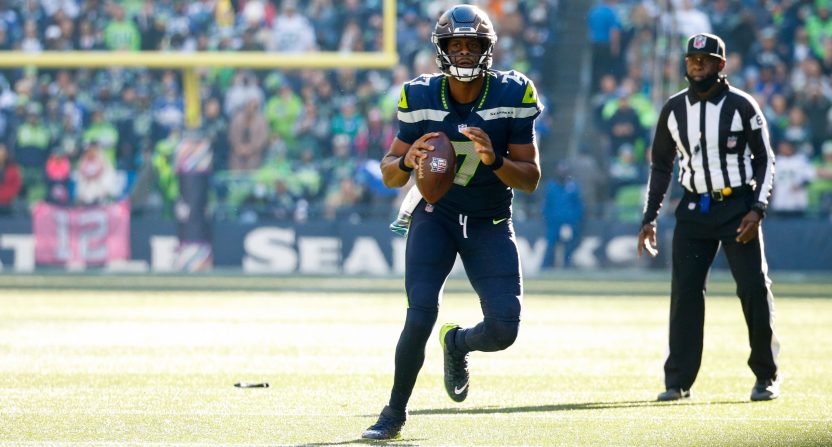 For the first time in a decade, the Seattle Seahawks have uncertainty at the quarterback position. That comes after Russell Wilson was traded to the Denver Broncos. But if Pete Carroll gets his wish, there will soon be a familiar face in the quarterback room.

Geno Smith served as Wilson’s backup from 2019-2021. While Smith is now a free agent, Carroll hopes to see him return to Seattle.

“I’d like to get Geno hooked up and get him back in (here),” Carroll said on his show on 710 AM KIRO in Seattle Tuesday (as written up by Brandon Gustafson of the station’s website). “He showed us a good deal of command of our offense when he played last year, and he has a terrific understanding of it, so he’s out in front of the other guys that are involved in the competition in that regard.”

With Wilson sidelined due to injury for part of the 2021 season, Smith got into four games, starting three of them. All told, his numbers were not bad for a backup. He completed 68.4 percent of his passes for 702 yards with five touchdowns, one interception and a 103.0 passer rating.

The Seahawks did struggle in those games, going 1-2 in Smith’s starts. But given that Seattle was 6-8 during Wilson’s starts, it’s tough to lay too much blame at Smith’s feet.

Ultimately, it will come down to what Smith wants financially. While his numbers in 2021 weren’t bad, his overall career numbers leave much to be desired. Additionally, as Smith will be 32 in October, he’s not Seattle’s quarterback of the future.

There’s very little experience presently in the Seattle quarterback room. Jacob Eason was on the team for part of the 2021 season. But he saw no action for the Seahawks and only has five career passing attempts. Carroll has expressed optimism towards Drew Lock. But his career numbers are uninspiring. He’s also fairly inexperienced, having only been in the NFL for three seasons, and he has no experience in the Seattle system.

Smith isn’t a long-term option. Still, it makes sense that Carroll would want Smith back on the Seahawks in 2021.