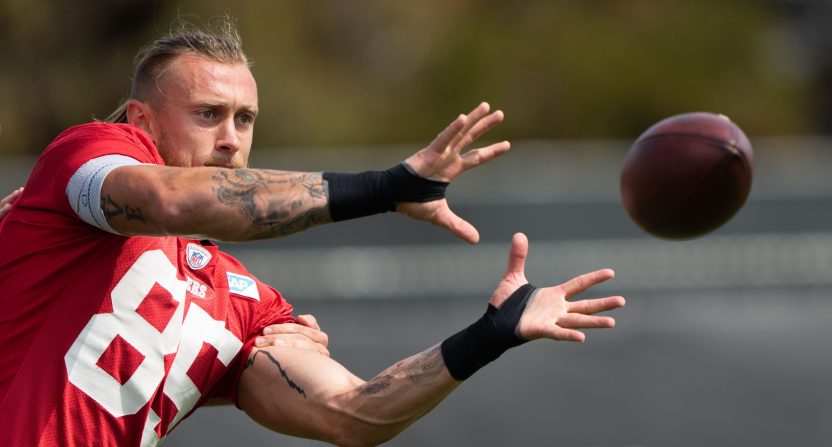 San Francisco 49ers tight end George Kittle missed practice Wednesday due to a groin injury. On Thursday, one report noted that the injury might cause him to miss the 2022 season opener against the Chicago Bears.

Kittle, who missed three games last year with a calf injury, injured himself in what head coach Kyle Shanahan referred to as Monday’s “bonus” practice.

“I’m not sure [the extent of the injury],” Shanahan said Wednesday. “I was hoping he would be good today. He did it a little bit on Monday and not feeling good today, so we’ll have to see day by day.”

On Thursday, Pro Football Network’s Aaron Wilson reported that the injury is serious enough that Kittle is unlikely to play on Sunday.

Sources: 49ers tight end George Kittle's groin injury "not good," contingency plans in place for him should he be ruled out for first game against Bears: One source characterized injury as serious enough it would be best for him to miss a game: @PFN365 https://t.co/X3jsTI7hIO

His source referred to the injury as “not good,” adding that it would be in his best interest to rest and rehab for another week or two before playing.

It’s the latest in a long line of injuries that have hampered the tight end in recent years. He hasn’t played a full season since 2018 due to foot, knee, and hamstring injuries.

When he does get on the field, Kittle is a big part of the 49ers’ offense. He garnered 71 receptions for 910 yards and six touchdowns in 14 games last year.