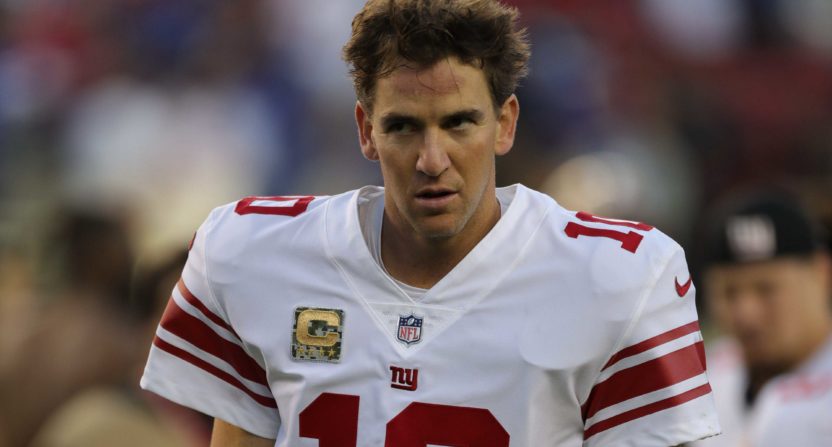 The New York Giants made a blockbuster announcement on Tuesday afternoon, when they revealed that Geno Smith – and not Eli Manning – would be starting Sunday’s game against the Oakland Raiders.

It’s worth noting that Manning is *not* hurt, and that Giants coach Ben McAdoo simply wants to get a look at Smith (for some reason) and rookie Davis Webb.

“Geno will start this week,” McAdoo said. “Over the last five games, we will take a look at Geno, and we will also give Davis an opportunity.”

McAdoo also revealed his plan to Manning, and offered him the chance to start and keep his streak of 210 consecutive starts going, but Manning declined the opportunity.

“Coach McAdoo told me I could continue to start while Geno and Davis are given an opportunity to play,” Manning said. “My feeling is that if you are going to play the other guys, play them. Starting just to keep the streak going and knowing you won’t finish the game and have a chance to win it is pointless to me, and it tarnishes the streak. Like I always have, I will be ready to play if and when I am needed. I will help Geno and Davis prepare to play as well as they possibly can.”

It’s been a lost year for the Giants. At 2-9, they’re at the bottom of the NFC East, and only the 0-11 Browns and 1-10 49ers have worse records. Manning’s top receiver, Odell Beckham Jr, is on IR along with 18 of his teammates.

Manning actually hasn’t been a complete disaster for the Giants – he’s thrown for 2,411 yards, 14 touchdowns, and seven picks this year, ranking 15th in the NFL in passing yards, tied for 17th in passing touchdowns, and 24th in QB rating.

Is Geno Smith the answer? Probably not because, well, he’s Geno Smith. The former Jets bust has attempted just 58 passes over the last three seasons, and at 27, there isn’t much to dream on for his future. Davis Webb, a rookie third rounder out of Cal, might be the more intriguing option long-term for the Giants, but the Giants apparently want to ease him into things rather than immediately throwing him into the fire.