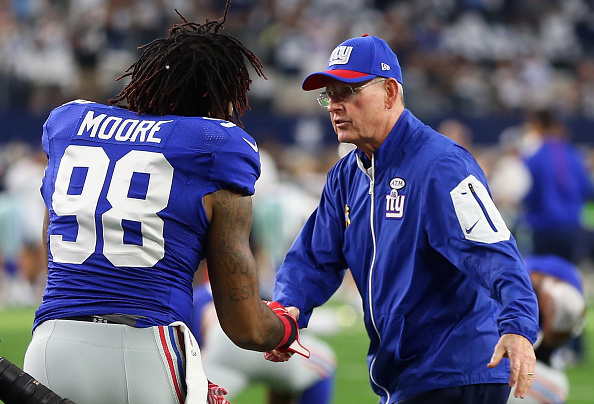 The New York Giants waived defensive end Damontre Moore on Friday, after Moore got into a fight before practice with teammate Cullen Jenkins… over Beats by Dre headphones.

Apparently other Giants players got free headphones, and Moore was angry enough about not getting a free pair that he got into a fight. This is a thing that actually happened, according to NFL.com’s Ian Rapoport:

#Giants DE Damontre Moore got into a fight with Cullen Jenkins, sources say, over not getting free @beatsbydre headphones like other players

Moore was waived after he got into a fight with teammate Cullen Jenkins before practice, NFL Media Insider Ian Rapoport reported, per a source informed of the situation. According to Rapoport, Moore was upset about not getting free headphones like other players on the team. It was one of several displays of immaturity by Moore and the team decided enough was enough, Rapoport added. Every game, all season “We made the move today in the interest of both parties,” Giants general manager Jerry Reese said in a statement released by the team.

Giants reporter Jordan Raanan of New Jersey Advanced Media is hearing that star wide receiver Odell Beckham Jr. gave out Beats by Dre headphones to everyone in the New York locker room, and Jenkins took an extra pair, leaving Moore without any:

You can understand how that would make Moore upset, but getting into a fight — especially on team property — is not a good idea.

ESPN.Com’s Dan Graziano reports that there had been several behavioral issues with Moore over the last few years, and the organization decided they finally had enough after the fight.

Sources say the final straw was a recent fight in practice between Moore at his defensive line teammates. But sources said Moore had also been fined several times by the team this year for rules violations and behavior problems and that the decision to waive him was based on the accumulation of issues, not just one fight.

Coaches and administrators have spoken to Moore on several occasions, this year and in years past, about his behavior in practice. Sources say Moore routinely clowned around on the practice field in front of everyone from teammates to Giants owner John Mara and responded poorly to efforts by teammates and coaches to get him to take practice more seriously. Moore was also penalized several times this year during games for roughing the passer, and his lack of on-field discipline earned him a full-game benching in a Week 7 over the Dallas Cowboys.

Sources also said Moore feuded openly with some team officials, including general manager Jerry Reese, when confronted about his behavior. Reese is fiercely loyal to his draft picks, so for him to cut a former third-rounder during the third year of his rookie deal would likely require extreme circumstances.

Moore, 23, had been a disappointment on the field anyway, after being a third-round pick by the Giants out of Texas A&M in 2013. He started zero games for the Giants in his three years with the team, and had just 8.5 sacks over that time after he was expected to be an impact pass-rushing threat out of college.