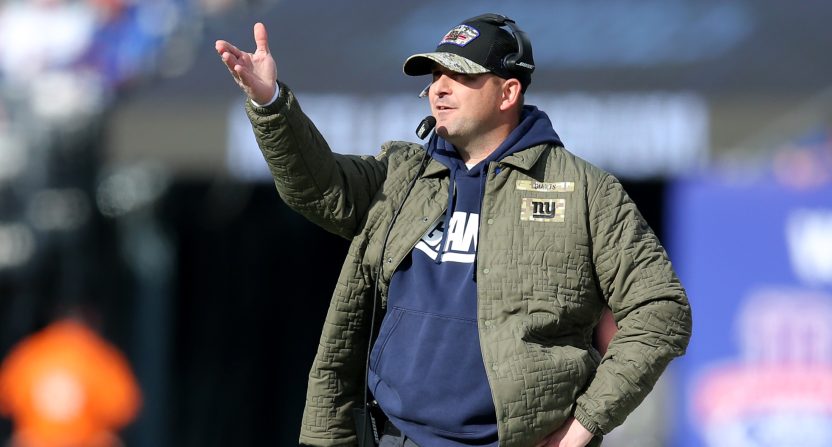 The NFL franchise made the decision on Tuesday following a reported two days of discussions between him and ownership, according to NFL insider Ian Rapoport.

The #Giants owners met with Joe Judge for two days before making the decision to move on. A full housecleaning at NYG. https://t.co/Vd7YoP5jj7

I'm told Joe Judge's assistant sent a text to his coaches tonight relaying the news saying, "I'm sorry to send this text, but Joe called me and he was let go. If you are around tomorrow, be in the office at 9am and he will meet with his staff."

While coaches like Matt Nagy, Mike Zimmer, and Brian Flores were fired on “Black Monday,” it appeared at the time that Judge would keep his job despite 6-10 and 4-13 seasons. The coach has been making headlines for all the wrong reasons recently, going on an 11-minute rant about how people can’t see how good things are, and then called what many said was one of the most embarrassing play calls they can remember this past weekend. Aaron Rodgers even mocked the QB sneak from the four-yard-line on Tuesday.

A sign of difficult times for the Giants’ offense as they run a QB sneak from their own 4-yard line on 3rd & 9 from this formation. pic.twitter.com/zFHSHsJikA

Judge joins general manager Dave Gettleman, who retired on Monday, clearing the way for the Giants to startt fresh next season. The 40-year-old went 10-23 in two seasons at the helm after long stint as an assistant with the New England Patriots.

While the speculation begins immediately for who the Giants will hire to lead their team, a lot of people are likely to point to a report from last week that Michigan head coach Jim Harbaugh would be interested in the Giants job “if open.” Well, now it is.

In the meantime, the news that Judge had been fired by the Giants inspired a very strong reaction on social media.

At least he can hold his head high knowing that he went out whining about everything while overseeing some of the worst offensive performances in recent NFL history. https://t.co/w9jTVvo2qV

But he wasn't done inculcating a culture of accountability yet. That is an eight-year task! https://t.co/Wsj5SQBhWE

It actually happened!
I know a bunch of y’all Giants fans hate my guts because blah blah blah … I was right about Judge from the start. And then again this summer. I hope the Giants look outside of their comfort zone for a new direction and get back to winning. https://t.co/MkNlrqetUu

The Giants are a college team now. AD didn’t want to fire the coach. Boosters threatened to pull funds. In the end, had to fire him for recruiting’s sake https://t.co/E4mIKDoLSG

Pour one (medium soda) out https://t.co/xRJ4CGy2tO

Guess he couldn't sneak through that one. https://t.co/FkFs9FdGgW