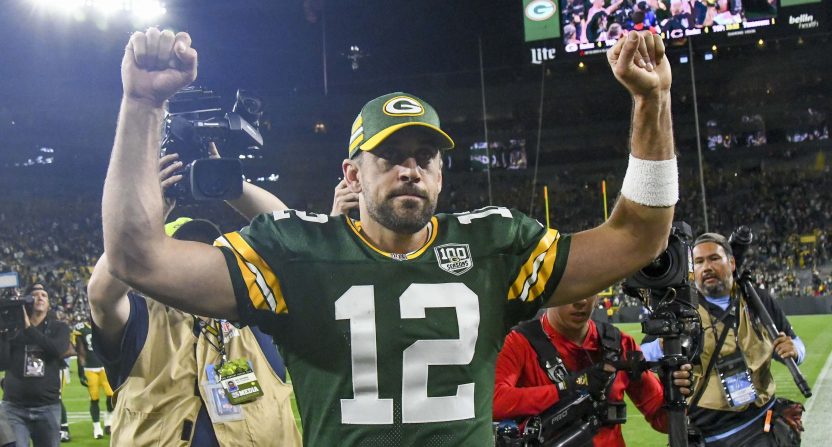 In the first half of Sunday night’s game against the Chicago Bears, things looked brutal for the Green Bay Packers. They found themselves down 17-0 at halftime, with new Bears prize Khalil Mack making a massive impact on defense (a touchdown, interception, sack, and fumble recovery, all in his first half as a Bear).

Oh, and Aaron Rodgers suffered a leg injury that didn’t look good at all.

Rodgers was carted off and it looked like a potentially serious  knee injury. While he was in the locker room, Green Bay backup quarterback DeShone Kizer was introduced to Khalil Mack:

But Rodgers surprisingly returned in the second half, and was clearly hobbled. Rodgers ran plays strictly out of the shotgun and pistol formations due to his limited mobility.

Rodgers on playing with less mobility: “I have to get the ball out. I can’t be moving around a whole lot back there.” Rodgers told McCarthy he wanted to be in pistol or shotgun, not under center. #Packers

Entering tonight, the Packers had a franchise record of 0-107 in the regular season (0-4 in the postseason) when entering the 4th quarter facing a deficit of 17+ points.

Of course, it’s not really “stunning” if you’ve followed Rodgers over his career. And if you’re a Bears fan like myself, you’re *especially* not shocked. It’s just more of the same.

Even at less than 100%, Rodgers can still make throws like nobody else on the planet can. Like, this 39-yard perfect pass to Geronimo Allison for the Packers’ first touchdown of the game:

Rodgers did a terrific job of adjusting to a Bears pass rush that made things very difficult in the first half, and got the ball out quickly with efficient passes, allowing his receivers to make plays. Randall Cobb certainly made a play here, on what would serve as the game-winning 75-yard touchdown, and the third touchdown pass from Rodgers in the fourth quarter:

Now, the Bears probably win this game if they do just one of several things better in the second half. Like, if Kyle Fuller had just caught this easy interception in the final three minutes, right before the Cobb touchdown:

Additionally, playcalling from Matt Nagy — Chicago’s new head coach — was very questionable in the second half, particularly on two 3rd-and-1 plays where he refused to just hand the ball to Jordan Howard. And speaking of Howard, he had a mistake of his own by not staying inbounds on a run in the final minutes to stop the clock. The Bears’ defense wasn’t as aggressive in the second half, and the secondary made a few brutal plays. Second-year quarterback Mitch Trubisky got very jumpy in the pocket in the second half and missed some throws he has to hit (including in the first half when he missed Allen Robinson on a wide-open goal-line pass). Center Cody Whitehair continued his problem of having terrible shotgun snaps.

But they probably don’t blow the game against any other quarterback in the NFL, and especially if that quarterback is playing injured like Rodgers was. It was a remarkable performance by No. 12, and just the latest in Rodgers’ Hall of Fame career. It’s something that Bears fans, Vikings fans, and Lions fans have seen too much of the over the years. And it doesn’t appear that will change anytime soon.