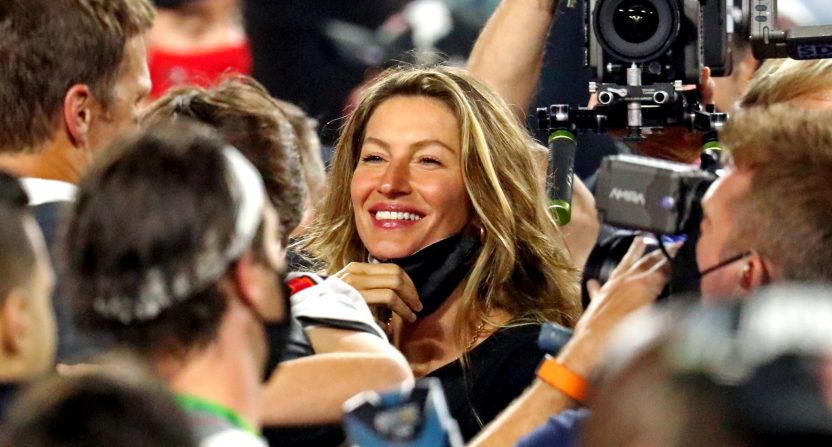 It is safe to say that there seems to be trouble in paradise between NFL superstar Tom Brady and supermodel Gisele Bündchen and the power couple appears to be on the outs over Brady’s decision to return to the Tampa Bay Buccaneers for another season.

Brady’s absence from training camp led to much speculation and rumormongering. When he returned, the quarterback was coy on the specifics but told reporters that “there’s a lot of s*** going on.” Then came reports that he and his wife Gisele were in the midst of a major fight and ever since then it seems like the details have kept dripping out. Per reports and rumors, she left the family compound and the two haven’t spent any time together since she returned to Florida.

Brady spoke about the difficulties of playing in the NFL and getting older on his podcast this week, though he noticeably did not mention his wife when discussing his family.

“You can’t stop your life even though sports is happening. Even though I’m playing in my 23rd year, I have a freshman in high school that’s playing football, too,” he said. “I have a 12-year-old that is going through his life.

“I have a 9-year-old that is going through her life. And I have parents, and I have a lot of things that are really important, off-field pursuits and goals that you’re trying to maximize as well. Once football season comes, I really lock in on what I need to do and how I need to focus and the kind of commitment I need to make for the organization, so we can maximize out potential as a team.”

The Bucs kick off the 2022 NFL season on Sunday and it sounds like we can expect that Gisele will not be there to cheer on Brady. According to People, sources tell them that, as of right now, she’s not expected to attend the game.

“It feels very different this year than last year. She was excited to be here, we saw her around,” the source told People. “I’m not saying she can’t possibly come, but nothing is in place for her to be here for the first regular season game and that seems weird.”

It’s an unfortunate situation, especially given that Brady doesn’t really have anything left to prove on the field. But we’ll see how it all plays out, on the football field and off of it.

"I think a lot of stuff was swept under the rug."

"I think a lot of stuff was swept under the rug."