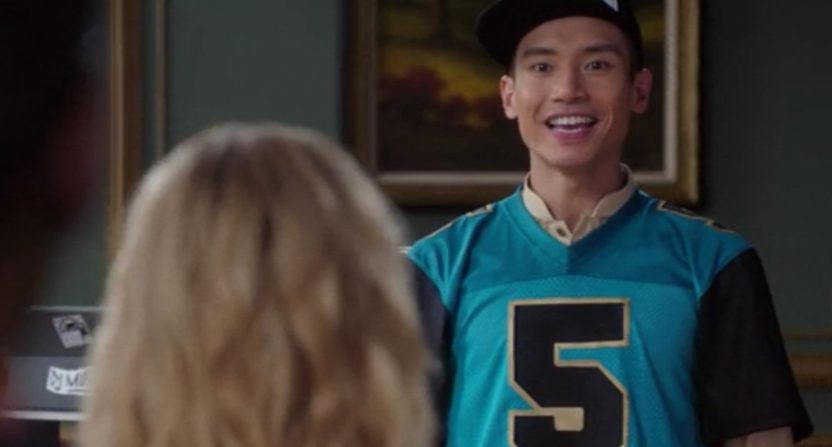 Over two seasons of the NBC sitcom The Good Place, Blake Bortles and the Jacksonville Jaguars have emerged as an unlikely running joke. For those who haven’t seen the show (and don’t mind some light spoilers), the Jags are the favorite team of Jason Mendoza, an empty-headed Floridian with quite indelicate interests. Mendoza loves Bortles and dreams of a day when his favorite team rises above its typical mediocrity.

Well on Sunday, the Jaguars beat the Pittsburgh Steelers 45-42 to advance to the AFC Championship, and although Jason is dead (and also fictional) and therefore isn’t around to watch, everyone else involved with The Good Place seems to be taking great enjoyment in the team’s success.

— Jason Knew The Jaguars Were Quite Good Place (@nbcthegoodplace) January 14, 2018

After Jacksonville prevailed, The Good Place retweeted several impressed fans of the show, reupped a post from last week and changed its display name to “Jason Knew the Jaguars Were Quite Good Place.”

We did it, J-town. pic.twitter.com/vmtiERvzNT

— Jason Knew The Jaguars Were Quite Good Place (@nbcthegoodplace) January 7, 2018

This glee goes deeper than the show’s official accounts seizing on some publicity. Over the past couple weeks, those involved with The Good Place, including creator Mike Schur, have celebrated the Jaguars’ success…

The #Jaguars are now 1-0 in the playoffs in what most analysts are calling the "Jason Mendoza Era."

…while others have come clean about not quite understanding what Jason meant by “Bortles.”

I have to admit something about @nbcthegoodplace: the first few times @mjacint0 said “BORTLES!” I thought it was just a weird way of saying “BOTTLES!” bc he was always throwing a Molotov Cocktail which is in a bottle & seems like something @JoeMande would write? ? I have shame.

Mande told SB Nation’s Charlotte Wilder that The Good Place’s Jaguars gag emerged because the writers thought Jacksonville was where the “opposite of a silent, meditative Buddhist monk” was most likely to hail from.

Joe Mande: Well, [show creator] Mike Schur really knew a lot of what he wanted before we got into the writers’ room. He knew the twist ending and a lot about the characters. So Jason, or at the time Jianyu, was underwritten, because Mike knew he wanted the joke to be that a silent Buddhist monk was revealed to be some kind of dirtbag. When we started writing it, we were like, what’s the opposite of a silent, meditative Buddhist monk? I pitched a kind of Steve Aoki, which became that he’s definitely from Florida.

Obviously the Jaguars’ success this postseason means that Season 3 of The Good Place will have to lay off the Bortles jokes a little bit. You can’t make fun of a team (or quarterback) that won back-to-back playoff games. And if Jacksonville somehow, some way gets through the Patriots next week and the NFC champion in the Super Bowl, Mande says, that will make its way into the show’s script.

If they somehow win the Super Bowl, are you going to write that in?

Oh, yeah, we’ll have to. I mean, we’re gonna have to shoot an entire season in Jacksonville or something. That’s so not my call to make, but I feel like nothing would be better than opening the first episode of Season 4 with Jason on a Super Bowl parade float, somehow being beamed down from wherever he is.

Exactly. If that happens, me and Manny are going back for sure. We’ll buy a condo in Jacksonville. On Fred Durst Boulevard.

That’s enough to make all of us Jaguars fans for a few weeks.