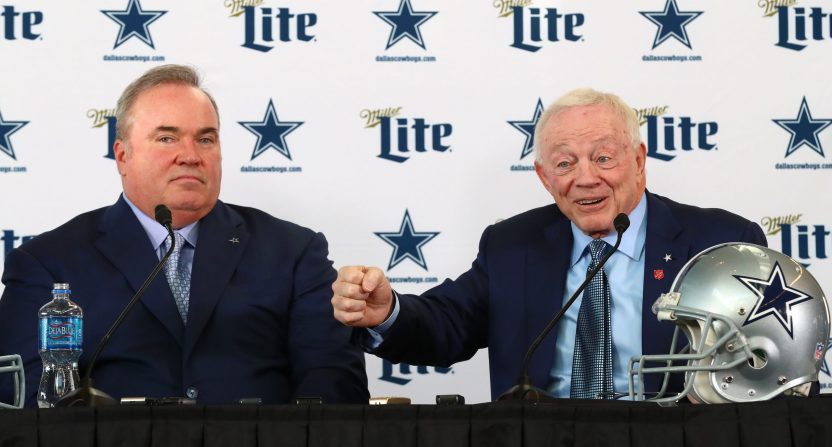 The NFL coaching carousel has stopped spinning. Here’s how each team did:

Credit the Panthers for doing something different. Instead of hiring a retread or young assistant, they grabbed a head coach from the college ranks. They identified their guy and made an aggressive offer to keep him away from New York (Rhule was the Giants offensive line coach in 2012). The length of his contract (7 years, $60 million) coupled with star linebacker Luke Kuechly’s sudden retirement suggests that this will be an extensive rebuild. But you have to like the bold moves so far, including the reported hiring of hot-shot LSU assistant Joe Brady to run the Panthers offense. At the age of 30, Brady will be the youngest offensive coordinator in the league. He’ll bring fresh ideas in contrast to previous Carolina OC Norv Turner who is 67. Brady will inherit tailback Christian McCaffrey who became just the third player in NFL history to have 1,000 yards rushing (1,387) and 1,000 yards receiving (1,005) in the same year.

Unfortunately for Rhule, the track record for college coaches in the pros isn’t good. Pete Carroll and Jimmy Johnson succeeded but several have failed including Nick Saban, Bobby Petrino, Greg Schiano, Chip Kelly and Steve Spurrier. Carolina gave him a long deal, so the Panthers will be patient. Rhule won at Temple and troubled Baylor; he’s used to tough jobs.

The Browns promoted Freddie Kitchens who had only been an offensive coordinator for one season. His replacement is a guy who had only been a permanent offensive coordinator for… yep, you guessed it, one year. The usual playbook is to get a new coach who is the complete opposite from the previous one. Stefanski could be Kitchens 2.0. Stefanski is a longtime Vikings assistant who was promoted to interim OC in December 2018 after John DeFilippo was fired. While the Vikings offense was better in 2019, it wasn’t all because of Stefanski. Minnesota brought in Gary Kubiak as an assistant head coach and offensive advisor. Kubiak’s influence played a huge role in the success of Kirk Cousins, Dalvin Cook and Stefon Diggs.

Stefanski, 37, is young so he had to take this opportunity. But he’s working for one of the worst organizations in sports. He has a quarterback in Baker Mayfield who regressed badly in his second season. A wide receiver in Odell Beckham Jr. who dropped way too many passes. And the Browns best player, defensive end Myles Garrett, has been suspended indefinitely. Cleveland was the victim of its own self-imposed hype. The best bet is for Stefanski to build around Nick Chubb (1,494 rushing yards) and to try and limit Mayfield’s mistakes.

This isn’t a terrible hire, just an uninspired one. In a vacuum, McCarthy’s record is terrific. He made the playoffs nine times in 13 seasons and his 61.8 winning percentage is tied with Andy Reid for fourth-best among active coaches. Some will draw parallels to Reid whose enjoyed a successful second act in Kansas City. However, when Reid was fired in Philadelphia in 2012, he immediately landed with the Chiefs. McCarthy was axed before the end of 2018. There were eight teams looking for new coaches at the end of that season. No one wanted McCarthy.

McCarthy’s offense got stale and he was way too conservative despite having Aaron Rodgers, arguably the NFL’s greatest passer. Plus, there were allegations of friction between him and his star QB. It’s telling that Cowboys owner Jerry Jones only formally interviewed McCarthy and Marvin Lewis, two guys so desperate to get back in the game that they were willing to deal with a meddlesome owner. Perhaps McCarthy has learned his lessons and will adapt his philosophies. He decided to keep offensive coordinator Kellen Moore who directed the league’s top offense (431.5 yards per game). The Cowboys are too talented (Dak Prescott (free agent), Ezekiel Elliott, Amari Cooper (free agent)) not to make the make the playoffs next season.

If a janitor stood next to Bill Belichick on the sidelines, he’d have a head coaching job within a week. Judge is the latest Belichick protégé to be hired. None of Belichick’s assistants have made a major impact in the NFL but teams will continue to raid his staff with the hope that eventually one will be a superstar. Judge worked for Belichick since 2012 and before that he was a special teams assistant at Alabama for Nick Saban. Belichick AND Saban! This guy must be a savior, right? Maybe. Matt Rhule might have been the Giants coach if not for Carolina offering him a monster contract.

The Judge era began with tough talk about extensive practicing in pads – even though there are player union rules that limit the number of padded practices. This is the third straight coach the Giants have hired since Tom Coughlin won a pair of surprising Super Bowls. Judge will be the first who is starting fresh with a relatively new quarterback. Ben McAdoo and Pat Shurmur were tied to the fossilized remains of Eli Manning. Judge will try most out of Daniel Jones. Jones’ rookie year was inconsistent at best, filled with turnovers (13 fumbles, losing nine in nine games). The presence of general manager Dave Gettleman is also challenging as the Giants are 9-23 under his leadership.

When Cam Newton was healthy, Rivera was a two-time coach of the year (2013, 2015). After Newton’s body broke down, Rivera lost his job. Everyone anticipated that Rivera wouldn’t be unemployed for long. He is well-respected in league circles and has received praise for his ability to connect with players. He’s been a part of the NFL since he was a linebacker for the legendary 1985 Super Bowl champion Chicago Bears. Rivera gives Washington the credibility it lacked under Jay Gruden who made the playoffs once in five-plus seasons.

Washington is a difficult job. Since Dan Snyder bought the team in 1999, the franchise is 142-193-1 with just two playoff victories. Coaches with better résumés than Rivera have been swallowed up by lousy ownership. Snyder brought back Joe Gibbs who won three Super Bowls for the team in its glory days. Gibbs went 30-34 in his second stint. Mike Shanahan won a pair of Super Bowls with the Denver Broncos and he went 24-40 with Washington. Can Rivera, the ninth coach under Snyder, break the cycle? He’s made cosmetic changes like getting rid of a ping pong table. It’ll take a lot more than that to turn Washington into a contender.