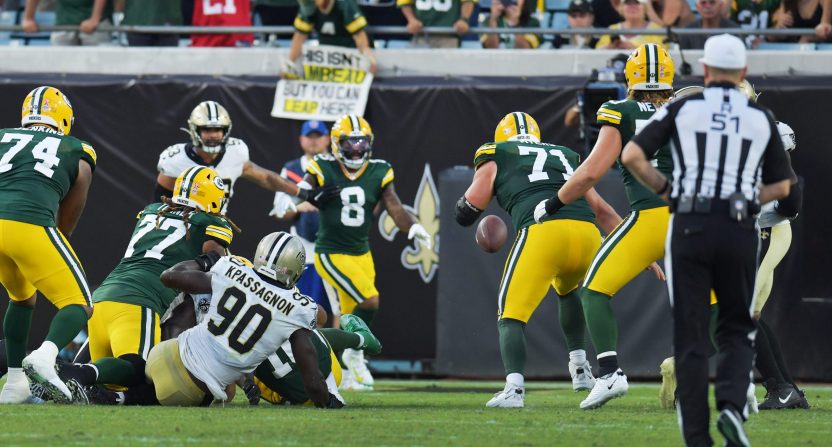 The Green Bay Packers got absolutely obliterated in week one of the NFL season by the New Orleans Saints. Coming off of a preseason filled with turmoil and drama surrounding star quarterback Aaron Rodgers, this might have been seen as a worst-case scenario. Rodgers and the rest of the Packers are trying to keep a level head about things as they hope to bounce back against the Detroit Lions this weekend, but it’s clear that some changes are needed.

According to Jonathan Jones of CBS Sports, the Packers are working hard to find some help at the linebacker position. That was a sore spot for the team in their loss to the Saints, not to mention the loss of Za’Darius Smith to injury. They clearly feel like they need help beyond the players on the roster right now.

“I’ve heard the Green Bay Packers were working the phones early in the week to get some linebacker help for their defense following the 38-3 drubbing by the Saints,” Jones wrote. “Green Bay (obviously) didn’t get much in the way of help, though, as teams who may have been willing to part with linebackers two weeks ago didn’t want to do it now that the season has begun and injuries have already taken place.”

It doesn’t sound like the Packers are going to get much help from other teams at the moment. In the meantime, they’re also looking to practice squads to see who might be able to step up. According to The Athletic’s Matt Schneidman, the Packers are signing a player from another team’s practice squad, although he wasn’t allowed to give a name as the process is still in the works.

Packers are signing an edge rusher off another team’s practice squad after Za’Darius Smith’s injury, Matt LaFleur says. He doesn’t say who since said player is still going through the signing process.

Schneidman also reported that Preston Smith and 2019 first-round pick Rashan Gary will be stepping into the space left open by the loss of Smith.

The Packers will now rely on Preston Smith and 2019 first-round pick Rashan Gary at edge rusher with the second-team All Pro in Za’Darius Smith (back) out for a while and headed to short-term IR. While losing Z is a huge blow, Packers have a solid Nos. 2 and 3 at OLB.

While there’s plenty of focus on Aaron Rodgers, it’s clear that the defense is an area that the Packers need to improve if they want any chance of making this season matter. Considering what might be at stake for the future of the franchise, they’ll want to pull out all the stops.