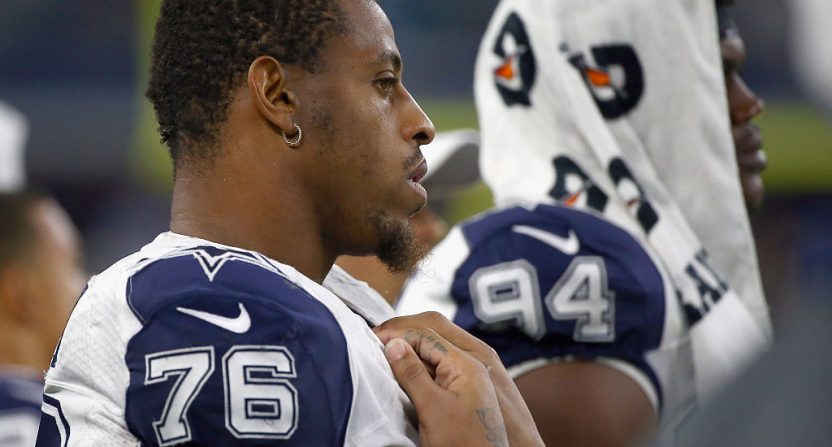 If the NFL Draft experience has shown fans anything, it is that talent will often be considered more important off-field history.

Oklahoma running back Joe Mixon was captured on video punching a woman in the face and was drafted in the second round by the Cincinnati Bengals. Mixon was the headliner, but others with a history of alleged violence against women to some degree included Caleb Brantley to the Cleveland Browns weeks after being accused of punching a woman in a bar and knocking her unconscious. The Jacksonville Jaguars drafted Mixon’s teammate, wide receiver Dede Westbrook, who had multiple accusations of violence but was never convicted of a crime.

Stuff like that all goes back to the famous line from Arizona Cardinals general manager Steve Keim that resurfaces on an annual basis between the combine and the draft.

"If Hannibal Lecter ran a 4.3, scouts would just think of it as an eating disorder." Fantastic line from Steve Keim.

Greg Hardy may not be able to run a 4.3, nor does he have the appetite possessed by Hannibal Lecter, but does have his own startling past of violence against women, one that he lacks the ability to apologize for. Instead, Hardy is more bothered by his past history of sideline antics and not being a good teammate. It is that part of his image he is working to repair in hopes of getting another chance to play in the NFL. And if the NFL Draft is any indication, Hardy’s chances of playing again in the NFL are far more realistic a possibility than you may be able to stomach.

“I did do some s–t wrong,” Hardy explained to Bleacher Report while staying in football shape in a spring league in West Virginia. “It gets crossed up when I say certain things. But there were some lines that I crossed as an athlete, responsibility-wise.”

Hardy was given a chance to stay in the league by the Dallas Cowboys, and despite getting the backing of Jerry Jones far more often than he deserved, he squandered the opportunity to stay in the league. Ask Hardy, and he will tell you it was because he fought with teammates and not because of his alleged actions against women in violation of the league’s personal conduct policy.

“Guilty? I mean, the United States of America said I wasn’t,” Hardy said. “But apologetic, most definitely. I’m sorry for anything I did wrong. I never wanted to do anything wrong.”

What a lame ass apology. It’s lame because it is so vague in what exactly he is apologizing for. That’s not good enough, or at least it shouldn’t be. The sad reality is it may just be enough for some team in the NFL to give Hardy another shot at the NFL. If that is going to be the case, Hardy knows he needs to convince people he is not the monster he has been made out to be.

“I’m kind of on the black side of things right now, with the perception of my persona,” he says now. “It’s hard to fight the fans. You can’t be right about somebody if you don’t know them—that’s just a basic common decency fact. But nobody wants to attest to that, so I have to show that Greg Hardy is not a f–king psychopath. And I say f–king because it’s that extreme. I want people to see that, instead of reading and believing the latest stories.”

From one scout’s viewpoint, all that matters to him is how does Hardy look as a player now.

“I didn’t come specifically to see [Hardy], but watching him play I was like, ‘OK, not bad’,” one AFC scout observing Hardy in the spring league told Bleacher Report. “His abilities in the past have basically no bearing on his current value, so I’m saying to myself, ‘Let me see how he plays.'”

In fairness, that should be all that matters for a scout. The scout is simply just doing his or her job in evaluating the performance of a player. It is up to the management of a team to make the decision on whether or not Hardy is worthy of receiving another chance to play in the NFL.

The door is not slammed shut, but age is a key factor, and the NFL is more interested in giving rookies a second or third chance rather than a veteran who had already seen his value on the field diminish.