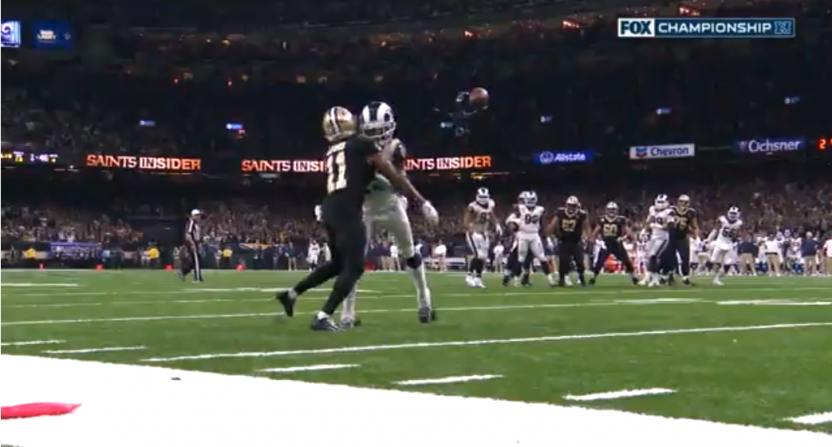 The Los Angeles Rams are going to the Super Bowl, despite never leading Sunday’s NFC Championship Game against the New Orleans Saints until Greg Zuerlein’s game-winning 57-yard kick in overtime. The Rams trailed 13-0 after the first quarter, and proceeded to outscore the Saints 26-13 the rest of the way to come away with a 26-23 victory at the Superdome.

Now, if we’re being completely honest here, the game should’ve never gotten to that point. The Saints were flat-out hosed on a terrible no-call in a crucial moment late in the fourth quarter.

With the game tied 20-20 and 1:49 remaining, New Orleans had 3rd-and-10 at the Rams’ 18-yard line. Drew Brees threw an incomplete pass intended for Tommylee Lewis, and Lewis was clobbered by Rams’ cornerback Nickell Robey-Coleman. Robey-Coleman did not play the ball and hit Lewis in the head to top it off. It was an obvious penalty to just about everybody in the stadium… except for the referees.

So, instead of having 1st-and-10 at about the 5-yard line with 1:45 remaining, the Saints had to kick a field goal, which Will Lutz made to go up 23-20. The Rams only had one timeout remaining, so the Saints would’ve been able to basically run the clock down and kick a game-winning field goal.

Instead, the Rams were left with plenty of time on the clock, and put it to good use with Greg Zuerlein hitting a 48-yard field goal to send the game to overtime.

And shortly into overtime, John Johnson III intercepted a Drew Brees pass to give the Rams the ball near midfield.

Five plays later, Sean McVay elected to have Zuerlein attempt a 57-yard field goal. If Zuerlein were to miss, the Saints would get excellent field position and be near field goal position immediately themselves. But Zuerlein has an unbelievable leg, and put that on display by making the 57-yarder with ease. This kick may have been good from 70:

So, the Rams definitely got help from the officials in the final two minutes of regulation, but they definitely took advantage of their opportunities after that to come away with the victory as well. They deserve full credit for that, and the refs surely missed several calls that went in the Saints’ favor during the game.

However, the no-call was just awful — and obvious to anyone watching — in such a spot and truly went a long way to altering which NFC team is playing in the Super Bowl. Saints head coach Sean Payton was understandably livid.

Sean Payton on the blown call: “I don’t know if there was any more obvious pass interference.”

And the league even admitted to Payton shortly after the game that it was a blown call.

Payton said he just got off the phone with the league and admitted the call was blown.

Instead, they call nothing. Maybe the worst blown call since Armando Galarraga's perfecto bid. https://t.co/LexVCnmlYn

I don't care what anyone says this game will have an asterisk forever. This was flat out bullshit and it makes the league look horrible.

Seriously, that might be one of the worst blown calls in NFL history.

Gutted for the Saints and their fans that a blatant PI wasn’t called. Simply can’t happen any week, let alone the NFCCG. Unsure of the best remedy, but man, that can’t happen.

Poetic justice that the NFC Championship swings on such an egregious no-call after a season full of more BS flags than your brain can handle.

The game should be over. That was an egregious no-call on that PI. #LARvsNO

Well, the story of this game won’t be that amazing kick. It’ll be the no call. Listen to that crowd, wait for Sean Payton’s presser. It’s ALL going to be about the no call. And that might be fair. It cost the Saints a trip to Atlanta.

The Saints should protest this game. The officials gave this to the Rams

This call will certainly be talked about for a long time, especially in New Orleans. Whatever the case, the Rams (15-3 if we include the postseason record) will go to the Super Bowl to play the Chiefs or Patriots, and are a very deserving representative.