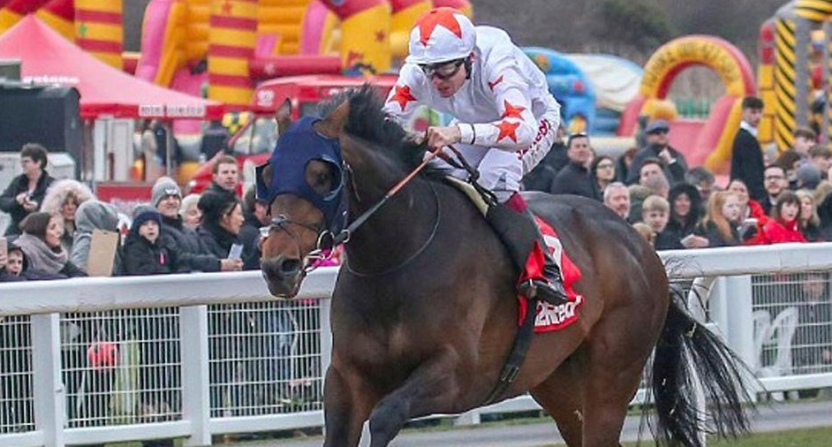 New England Patriots tight end Rob Gronkowski has been accused on more than one occasion of not having his focus on the field and instead preferring to “horse around,” as it were. Rather than buck that trend, it looks like Gronk is taking it literally. Wednesday, he announced on Twitter that he had officially acquired a stake in a horse named Gronk.

It's official, I am part of the Gronkowski Team!
GRONK ACQUIRES A STAKE IN GRONK … THE KENTUCKY DERBY-BOUND RACEHORSE!
Check it out: https://t.co/hCsHTAyepE pic.twitter.com/W78FEDUCWy

The official announcement was made on Gronk’s website, which refers to him strictly as Gronk.

“This horse is a winner and I love a winner,” Gronk (the person) said. “When I heard about the racehorse being named after me, I started watching and got really stoked when he started winning. He’s won his last three races and is now headed to the Derby. I’m all in: Welcome to the Gronk Family, Gronkowski the Horse!”

Per ESPN, Gronk the horse is a three-year-0ld colt that just so happens to be running a race at Churchill Downs on May 5 for the 144th Kentucky Derby. While Gronk the horse might be considered a longshot, the realization that we’re now going to get Gronk the human all dressed up, yelling in the grandstand, makes the outcome irrelevant. Perhaps we’ll get a repeat of his get-up from 2015:

The horse’s name comes from trainer Jeremy Noseda’s family, who are big Patriots fans. Phoenix Thoroughbreds, a global horse racing investment fund (which you didn’t even realize was a thing), bought the horse for over $400,000 last year, though it’s unclear how much Gronk the human has now invested.

In true Gronk form, he appears to have invested sight-unseen. He told the Wall Street Journal that he’s “never dealt with horses” and that “hopefully I can get a ride on the horse.” That begs the question…does Rob think he can ride the horse in the actual race? He might, you know…

Meanwhile, Boston fans await news about the future of Gronk the human and his continued employment with the Patriots. He’s been especially open about his intention to consider other options, including professional wrestling, instead of giving it one more go for another Super Bowl appearance. There’s also the growing possibility the team could trade him to try and maximize his value just in case.