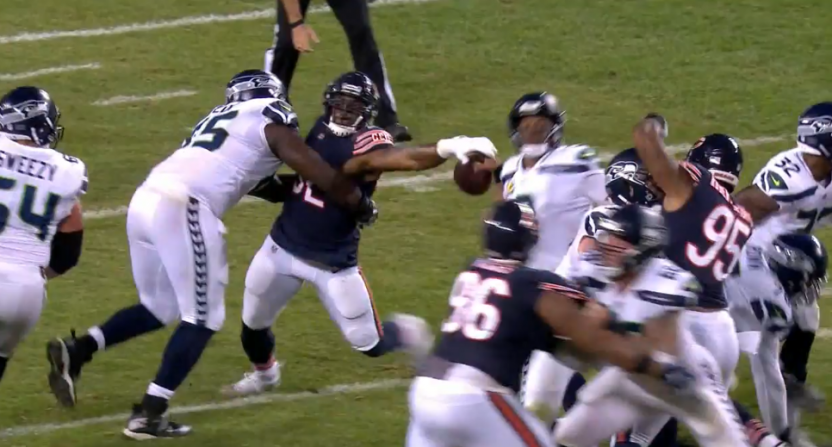 After the Oakland Raiders’ 20-19 loss to the Denver Broncos Sunday, Oakland head coach Jon Gruden was unhappy with his team’s pass rush, telling media “We gotta do something to get more pressure, maybe call more blitzes.” That was hilarious to many, considering how the Raiders had traded defensive end Khalil Mack to the Chicago Bears just two weeks back, and how Mack maintained his status as one of the league’s best pass-rushers with a dominant showing in Week 1:

As pointed out by @NBCSBears with @PFF data, Khalil Mack had more total pressures last week than the entire Oakland Raiders defensehttps://t.co/a6Lcw1d8tF pic.twitter.com/HGarSZP6xb

But that was just one week, right? Mack would come back to earth, and Gruden would be praised for his shrewdness in getting rid of him? Nope.

That’s quite the strip sack there (even if Seattle recovered the ball), and it was part of a generally disruptive first half for Mack. At the break, he had three solo tackles (tied for the team lead), plus that sack, and also created numerous other pressures. And that’s to say nothing of the changes he forced Seattle to make to their blocking schemes. But no, the Raiders couldn’t use a guy like that, could they? They’ll just have to go on trying to figure out “something to get more pressure.”