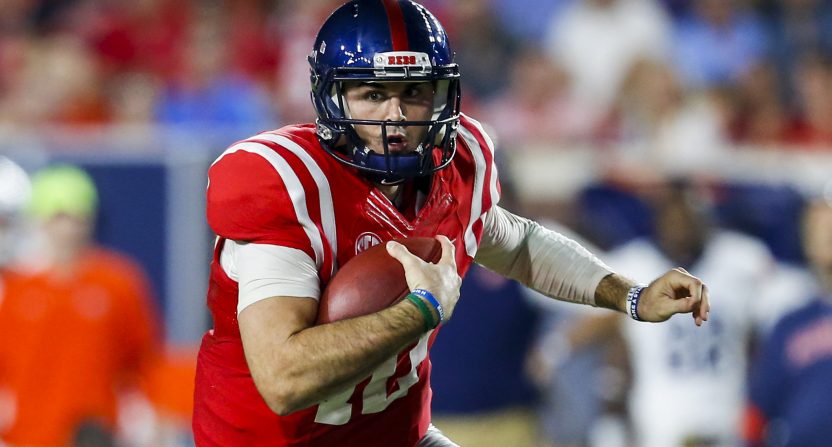 Chad Kelly has a lot to live up to thanks to his uncle. Jim Kelly is a Hall of Fame quarterback whose number 12 was retired by the Buffalo Bills after a lengthy career and a lot of success in Western New York.

Whether he wants to admit it or not, the pressure of being as good as his uncle might have affected the Broncos’ rookie quarterback while he was in college.

Chad, who was Mr. Irrelevant in this year’s NFL Draft, started his college career at Clemson before eventually finishing it off at Ole Miss. Along the way, Chad was dismissed from the Clemson squad for “conduct detrimental to the team,” played at East Mississippi Community College, and a had a rocky career at Ole Miss.

Before he made it to Ole Miss however, Kelly pled guilty to a non-criminal disorderly charge in 2015 after he argued with bouncers at a Buffalo bar in December of 2014.

On January 1st, 2016 Kelly led Ole Miss to a Sugar Bowl victory over Oklahoma State and was named Sugar Bowl MVP. The very next season, Kelly was dealt a brutal blow after tearing his ACL and lateral meniscus in November.

Between those two major moments in 2016, Kelly was involved in an incident in October of 2016. He was watching his younger brother’s high school football game in Buffalo and left the stands and went on the field during a brawl.

“He wasn’t involved in no brawl,” Jim Kelly said Thursday. “But people have to put that as a headline, ‘Chad Kelly involved in a brawl.’ He goes, ‘Uncle Jim, I saw my little brother getting kicked. What do you want me to do, stand there and watch?’ He said, ‘I wasn’t doing anything wrong, I was just trying to get him off the bottom of the pile at a high school football game.”

But the brawl didn’t seem to stop Chad from getting drafted and neither did not playing a large portion of last season. The Broncos took Chad with the final pick in the draft and now that he has a chance to play in the NFL, his uncle Jim has faith.

“I told Chad, ‘Don’t worry about going in there and thinking you’re going to compete for that starting job,'” Jim Kelly told ESPN on Thursday. “The bottom line is, you gotta go there and get healthy, learn the system and be humble. And I think he’s finally got it. He understands that.”

Broncos General Manager John Elway said he spoke with Jim before drafting Chad and that when they spoke, Jim said he was “a good kid.” Of course, one could be a good kid, but still not be suited for the NFL. Only time will tell if Chad can last in the league.

“I can’t go into all the details, but he wanted to know a little bit about Chad, and I told him,” Jim Kelly said Thursday. “And I said a lot of things that have happened have been three years ago. Sooner or later, people got to forget about that. I understand, you got to bring things up. Some of the stuff to me, totally [has been] blown up.”

Not only will Chad’s maturity play a factor, but his skills will too. Kelly is probably the third QB on the Broncos’ depth chart right now behind Trevor Siemian and Paxton Lynch.

“I said, ‘Just go in there, focus on learning the playbook, focus on what it takes to be a professional and let us handle all the other stuff, Chad,'” Jim said. “He finally gets it. I’m excited for him. I really am.”