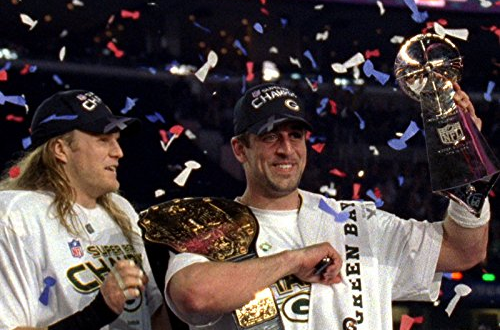 10 seasons ago, Aaron Rodgers took the Green Bay Packers on a surprising run to win Super Bowl XLV. He’s been trying to get back ever since.

This season might be his best chance. The top-seeded Packers (13-3) have homefield advantage, and at the age of 37, Rodgers has never been better. He’s about to win his third MVP. Rodgers entered this season with already the highest career touchdown-to-interception ratio and highest career passer rating in league history.

Rodgers’ Super Bowl path will be easier than a decade ago. Back then, the Packers (10-6) became just the second No.6 seed to win it all since the playoff expanded to include six teams in 1990.

They won three road playoff games. They overcame having a league-high 15 players placed on the injured reserve list. Rodgers missed a start late in the season due to a concussion. But Green Bay got healthy at the right time to reach the pinnacle.

There was a time when some people were not sold on Rodgers. His career has been defined by slights, both real and perceived. He famously slid in the 2005 NFL Draft and eventually replaced beloved Brett Favre, one of the most popular players in sports history. In many ways, it seemed like a no-win situation.

Favre embodied Green Bay’s return to glory after decades of irrelevance. He was the gunslinger from Kiln, MS with an “aw, shucks” demeanor. He won Super Bowl XXXI and the hearts of every Cheesehead. Many of those same fans were not as quick to embrace Rodgers, the introspective precision passer from Chico, CA.

Before the 2010 season, people had doubts, especially after watching Favre lead the hated Minnesota Vikings to a 12-4 record, including a sweep of Green Bay and trip to the NFC Championship game in January 2010. What had Rodgers and then fifth-year coach Mike McCarthy done? They were no Favre and Mike Holmgren, icons of Titletown, USA.

The 2010 Packers were expected to be good, but not great. Their under/over win total was 9.5 and they were fifth in Super Bowl betting odds, behind the Indianapolis Colts, Dallas Cowboys, San Diego Chargers, and defending champion New Orleans Saints.

But the Packers believed in themselves. With the Super Bowl being at AT&T Stadium in Arlington, TX, the players took to wearing cowboy hats and bolo ties in the preseason. The message was clear: Super Bowl or bust.

Green Bay looked shaky early when it started 3-3, but moved out to 8-4 with a sweep of Favre and the Vikings. But Green Bay’s chance of making the playoffs looked dire when Rodgers left the field with concussion in the second quarter of an embarrassing 7-3 loss at the Detroit Lions. The injury ruled Rodgers out of the following game, a 31-27 defeat at the New England Patriots.

There was no margin for error. At 8-6, the Packers needed to win their final two home games to get into the playoffs. With Rodgers back, the Packers rolled past the New York Giants 45-17, and survived 10-3 against the NFC North champion Chicago Bears to punch their ticket. But how far could the Packers go? The only team to win the Super Bowl as a No. 6 seed was the 2005 Pittsburgh Steelers.

Green Bay was a lot better than your typical No. 6 seed. They finished the regular season with the second-best points differential (+148) in the league (trailing only the New England Patriots’ +205). All their losses were by four points or less, including two in overtime. And they never trailed by more than a touchdown all season.

In the playoffs, Green Bay played its best football winning at Philadelphia, Atlanta, and Chicago. The Packers were healthier with key contributors back, such as rookie running back James Starks, who missed most of the regular season with a shoulder injury. Starks rushed for 123 yards in the playoff-opening 21-16 victory over the Eagles. And Rodgers was dialed in, highlighted by an incredible performance against the Falcons. Rodgers was 31-of-36 passes for 366 yards and three touchdown passes, as well as a rushing touchdown, in a 48-21 thrashing of top-seeded Atlanta.

Winning in Chicago was not as easy. Green Bay clung to a 14-7 fourth-quarter lead until 300-pound nose tackle B. J. Raji returned an interception 18 yards for a score. The Packers won 21-14. It also helped that Bears quarterback Jay Cutler was knocked out of the game earlier with a knee injury.

The Super Bowl was set. A meeting of the NFL’s most revered franchises: the Green Bay Packers vs. the Pittsburgh Steelers. Teams with national appeal led by young QBs: Aaron Rodgers and Ben Roethlisberger. You couldn’t ask for more.

Pittsburgh had a coach (Mike Tomlin) with a Super Bowl ring, and a quarterback with two. But the Packers had confidence. Before the big game, McCarthy famously had the players and the coaches measured for championship rings.

In the Super Bowl, the Packers jumped out to a 21-3 second-quarter lead, thanks in part to Nick Collins’ 37-yard interception return for a score. They were ahead 28-17 in the fourth quarter. The Steelers rallied to close within 28-25, but Rodgers drove the Packers for a short field goal that helped clinch the victory, 31-25.

Rodgers was magnificent against a Steelers defense that allowed the fewest points in the regular season (14.5). The Super Bowl MVP finished 24-of-39 for 304 yards and three touchdowns. Rodgers hoisted the Vince Lombardi Trophy while having a replica WWE world heavyweight belt on his shoulder.

The title validated Rodgers’ greatness. He was no longer in the shadow of Favre. Since then, he has surpassed Favre. Rodgers is not only the greatest Green Bay quarterback of all-time, but you can make a case for him being the greatest QB in NFL history. Yes, Tom Brady has six Super Bowl rings, but no one has played the position better.

Another championship would help that argument. Rodgers has come one game shy of getting back to the Super Bowl three times. Maybe this is the year.