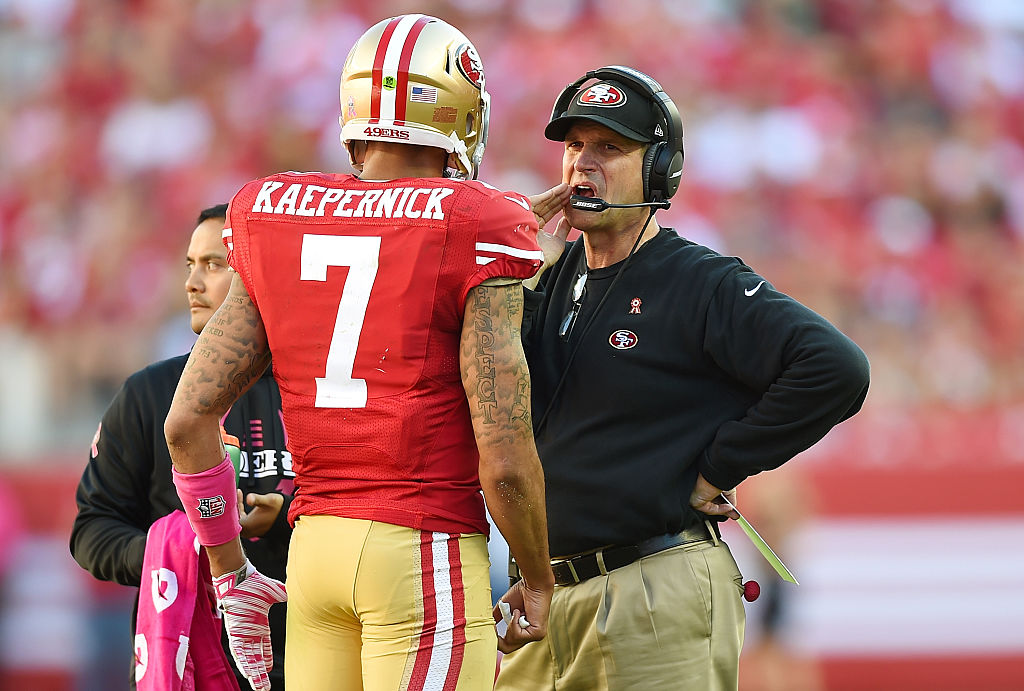 With the whole sports world buzzing about San Francisco 49ers quarterback Colin Kaepernick opting to not stand during pregame performances of the national anthem for political and social reasons, it was only a matter of time before the request for a reaction from one of his former coaches came about.

On Monday, Michigan head coach Jim Harbaugh, who previously coached Kaepernick in San Francisco before landing in Ann Arbor, voiced his opinion on the subject. He was not very supportive of his former quarterback.

“I acknowledge his right to do that,” Harbaugh said, according to MLive.com. “But I don’t respect the motivation or the action.”

It’s one thing to read the quote as presented. It’s another to see how that statement was relayed. It would be a pure guess to suggest Harbaugh may come off a little rougher in print than he does on video, which looks as though Harbaugh struggled to word his response the way he would have liked.

I apologize for misspeaking my true sentiments. To clarify, I support Colin's motivation. It's his method of action that I take exception to

Whatever the case, Harbaugh has now spoken on the manner, and it does not look as though he particularly cares for what his former NFC champion quarterback is doing.

But what about Harbaugh’s brother, John Harbaugh? John actually seemed to have more to say on the subject and Kaepernick as a person than his brother Jim. From The Baltimore Sun;

“I’m grateful for the right to express my displeasure,” Harbaugh said after Monday’s practice. “That’s what Colin chose to do, and it’s certainly his right to do it. I know Colin through [brother and former 49ers coach] Jim [Harbaugh], and of course, when he was out here [for a scrimmage in August 2014 between the two teams]. I probably met him two or three times, talked to him. He comes from a great family. He’s been brought up the right way. Good people who care about him and love him and he reflects that in how successful he’s been. I know Jim really likes him a lot. I respect him, respect his choice, whatever it is.”

Some have taken Kaepernick’s protest as a sign of disrespect for the military, so who better to ask for an opinion on the subject than another member of the Baltimore Ravens, Keenan Reynolds?

Reynolds, as you may recall, is one of the best players to come out of the Navy football program, so his opinion is worth recognizing on this reaction as well.

“Every American is afforded that right by the First Amendment,” Reynolds said, adding that former Midshipmen teammate and current New England Patriots long snapper Joe Cardona called him over the weekend in anticipation of being asked to comment on the Kaepernick situation. “So it is what it is. That said, I’m proud of what the flag represents, the people who came before us and defended our country so that we can play football, so that we can live freely and make our own choices. I was a part of the service, and I understand what that sacrifice is like having talked to so many veterans who have been through the thick of war and sacrificed limbs and lives to keep us safe.”

It is important to note Kaepernick went out of his way to make clear his protest has nothing to do with the military, and he is just focused on social justice issues many in this country continues to battle. It is Kaepernick’s goal to promote an open discussion on these issues.

It may be doing that for some, but for now it appears to be more about whether or not he should be standing for the national anthem.